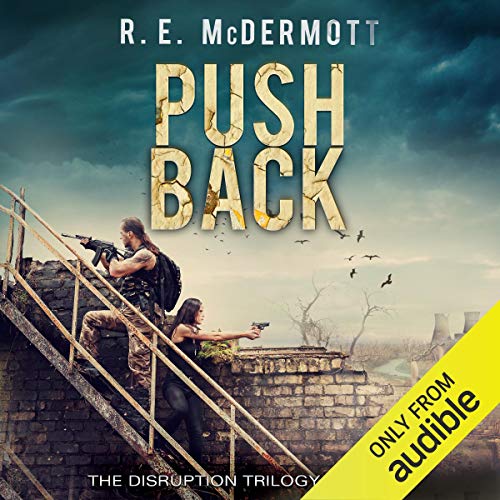 Earth reels in the aftermath of a savage solar storm, a global disaster of unprecedented proportion which leaves most of the world without electrical power or the means to restore it. Across the world, the responses of unprepared national governments are too little, too late. In the US, order collapses and opportunistic forces rise to fill the power vacuum, as what remains of a self-serving federal bureaucracy prioritizes the survival of politicians and bureaucrats over that of the general population.

As chaos and starvation spread, isolated pockets of survivors unite to survive. In Texas, Captain Jordan Hughes and a ragtag group of seamen and ex-Coastguardsmen gather their families close and resist the depredations of a hoard of escaped convicts. Meanwhile, in North Carolina, a similarly determined group of survivors attempts to use salvaged resources, not only to save themselves, but also to feed the hungry.

But not everyone is happy about the efforts of the valiant and resourceful few. Secure in his Camp David compound, a corrupt president consolidates power and builds a mercenary force to deal with any possible challenges to his absolute authority and to seize all dwindling resources for government use and fair distribution.

Survivors of the natural disaster are thus dealt another blow as they're betrayed by the very government established to protect them. Do they knuckle under to a dictator, or do they push back?

Having really enjoyed book 1 of this, I was so looking forward to listening to this one. Well the author didn't disappoint!! This one was much better than the first and even though it was over 13 hrs long, I devoured it in a day.

This starts straight after the ending of book 1 so the story flows really well and we are immediately drawn into the story. I absolutely loved seeing the characters again and seeing them grow and develop. Their lives don't get any easier and their struggle to survive, not only the lack of essentials, but also the gangs, gets so much harder. Plus they end up meeting others and some of their groups grow. The overall plot is complex and engaging. The author has put layers in place and is slowly starting to unravel them and we are finally seeing glimpses of where it's going.

This was so much better than the first and had much more action, plot development and intrigue and I can not wait to see where the characters and plot leads us! It's a series that I have no problem in recommending and one that I know I will re-read.

Kevin Pierce seems to be the go to narrator for books of this type and it's easy to see why. He is easy to listen to and knows how to tell a great story. He is always clear and concise and has a range of tones and cadences that bring the story to life.

*I received a free copy of this but voluntarily reviewed it. This in no way affected nor influenced my thoughts.*

I thoroughly enjoyed the first book in this series "Under a Tell-Tale Sky" and was very excited with the release of book two.

"Push Back" picked right up where book one left off and it wasn't long before I found myself immersed in a smooth continuation of the story. All of the elements I enjoyed with the first book were present and accounted for: an original story in a genre filled with stereotypes, a satisfying balance of big picture vs individual and group perspective, writing that pulled me back and forth between gripping action and emotion...all topped off with another 5-star Kevin Pierce narration. I was late for work more than once as I sat in the parking lot waiting for the end of a scene or chapter!

Some of the same issues I had with book one still exist but they are minor enough to merely make the story a 4 star rather than a 5 star. Representation of inner city gang culture, the way they speak, and the constant referral to them as "gang-bangers" by absolutely every non-gang character in the book got annoying. I've never referred to gang members as "gang-bangers" myself but apparently every other person in the country does. There were a couple, minor editing issues, something I can't help but pay attention to. Again, minor is the key word here and let's be honest, as far as finding flaws, this is definitely digging.

Much of the confusion I felt moving around in book one started resolving as the story progressed. There are some open ends I see getting neatly tied together in book three and I predict a very satisfying conclusion to the series. In McDermott's notes after the epilogue he will have you believe that he has very little knack for outlining the story and knowing where he's heading; this is not at all evident in the story so far.

I did receive this book from the author in return for an honest, unbiased review. I don't ever play favorites though, free book or not, as I don't appreciate reading dishonest reviews myself. This is not a problem with "Push Back", it was a pleasure to listen to and I'm grateful to the author for the gift. I look forward to the completion of Book 3 although it might be a while since McDermott will only go as far as predicting "sometime in 2017". It's going to be a long wait!

Survivors teaming up in different factions.

It was worth the listen, especially so for an OTR driver. Though not perfection, the action is non stop. The characters were fairly well developed and draw you in.

I enjoyed the first book and Push Back definitely followed suit. Unlike some series where the first one hooks you in then you suffer through the remaining two, Disruption keeps delivering with a wide variety of interesting characters logically dealing with a very crappy situation. What's helpful for me, is that Bob McDermott likes things that I like, whether it be shipping, the military, backpacking the Appalachian Trail, or figuring out how things would work in a Post Apocalyptic World. Bob has broad knowledge of many things, and he works this knowledge into his books in a way that makes them believable and realistic.

I've read this genre about six and seven times this year, and the Disruption Trilogy (Bob's new name for the series), is a very strong second following the One Second After series. It's possible that books two and three (when it's released) may beat out the &quot;After&quot; series. Push Back definitely put it within reach.

Please don't misunderstand my rating of 4 stars. In my scheme, 4 stars is a very good book certainly worth a credit. I reserve 5 stars for those books bordering on literary masterpieces, that have substance greater than the story itself. Bob is great author, but I think he's happy writing dang good stories versus trying to win a Pulitzer. And these types of books are an important part of my library as well.

Book 2 and it keeps getting better

This is a great story with multiple groups of characters each facing their own challenges while being part of a believable main story scenario. The author has done a great job of interweaving the individual story lines into a very real dystopian world. Can't wait for the next book.

The narrator, Kevin Pierce delivers an awesome performance and brings the characters to life.

Can't wait for the next.

Can't wait for the next.

Kevin Pierce is fantastic. I search for books that Kevin Pearce is narrating and choose from there. I listen to many many books of his. Always spot-on.

I have listened to dozens of post apocalyptic novels and this one did not let me down. The plot is unique and multifaceted enough to keep you hooked and less predictable than most. Your able to root for the good guys and you are not let down which I love. Definitely worth a credit.

One of the Best

This is one of the best survival/apocalypse book series I have ever read! It's right up there with Patriots et al. Realistic and gripping I had a hard time stopping at any point.
With so many characters it was hard at first to believe he could make the reader become attached to them all. Yet he did; and with spectacular flair and drama.
There's no suspension of disbelief required in this series. You buy in to the overall scenario and each scene without hesitation.
Looking forward to Promises to Keep with bated breath!

My biggest problem was the sex in the book. I'm not sure that the sex scenes really made the book better as I was not expecting them as the first book didn't go that way.

The narration was excellent again and I did enjoy almost all of the book.

I was given a copy of the book to review by the author in exchange for an unbiased review.

loved It! great characters, and story. both books in the series are well worth listening to.