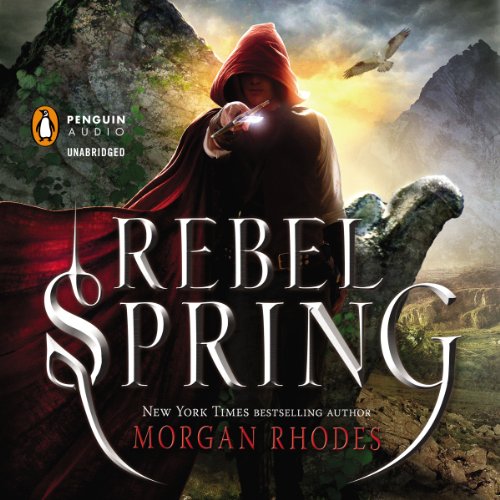 Auranos has been conquered and the three kingdoms - Auranos, Limeros, and Paelsia - are now unwillingly united as one country called Mytica. But alluring, dangerous magic still beckons, and with it the chance to rule not just Mytica, but the world....

CLEO is now a prisoner in her own palace, forced to be an ambassador for Mytica as the evil King Gaius lies to her people. MAGNUS stands to eventually inherit the new kingdom but is still obsessed with his feelings for his adopted sister, Lucia. LUCIA is haunted by the deadly outcome of her breathtaking display of magic that allowed her father to capture the kingdoms. JONAS watches at the palace gates, a troop of rebels behind him, waiting for him to tell them how he plans to overtake King Gaius.

When Gaius announces that a road is to be built into the Forbidden Mountains, formally linking all of Mytica together, he sets off a chain of cataclysmic events that will forever change the face of this land.

Praise for the Falling Kingdoms series:

Another great story from Rhodes. It was very captivating. love the narrator and all the accents he does

Rebel Kingdom is a continuation of a story. Throughout the twists and turns the plot thickens and is unpredictable. (YAY!!) I love the dynamics of the characters and how the author presents their thought process. I've become emotionally attached to several and I cannot wait to start book 3.

Can't wait for the next book!

Would you consider the audio edition of Rebel Spring to be better than the print version?

This production of the audio edition is LOADS better than the first audio production of Falling Kingdoms. I thought that I wasn't going to buy the audio edition of Rebel Springs because I wasn't impressed with the audio of Falling Kingdoms but the narrator did SUCH a better job on this tape! You can't hear his sharp intakes of breath as predominantly as well as, his hurried rush of words when reading character lines. In this production he speaks smoother, not so staccato. I very, VERY much like this series.

What was one of the most memorable moments of Rebel Spring?

I liked that he improved his performance from Falling Kingdoms to Rebel Springs. This audio is very good.

No tears but I'm not a crier. The end made me VERY much excited for the next book. We really haven't had an in-depth look yet to Lucia and I think Prince Magnus still has a lot of growth coming. Also Cleonia had a large undertaking stirring and I think the best is yet to come!

Lord Aron is a perfect addition to the cast. He's horribly annoying but brings a good dynamic to the circle of nobles. Same with Nic! He surprised me at the end, holy moly!CAN'T WAIT FOR MORE!

I'm just gonna get to the point: Rebel Spring was a lot more boring than Falling Kingdoms
*deep sigh*
The plot specifically was all over the place but as I re-read the series I'm sure I'll find bits and pieces to enjoy

Right when you think you know what's coming...you don't. Twists and turns that captivate you.

I am not much of a reader, but this story line has me so wrapped up in it that I feel as tho I am there with the characters. I can not wait to start the next book. And hopefully these turn into a movie or the next game of thrones.

My newest series to read.

Where does Rebel Spring rank among all the audiobooks you’ve listened to so far?

It is in the top five series I have read.

What was one of the most memorable moments of Rebel Spring?

The princesses guard dying trying to save her.

His ability to change his voice to each character and sustain them is absolutely amazing. Nobody in all the audio books I have read can top Fred. He deserves an award if he hasn't already received one.

No, I prefer my books in intervals.

I get that authors want plot twists and crazy curve balls, but this author is making us lose our emotional bonds with the characters.

(Spoiler!!)
How many guys Cleo has liked so far: Theo, Jonas, and now the prince.

I could go through a list. It's like 5 different fickle romances stacked on top of each other. It makes me roll my eyes.

these books are byfar amazing..... and I'm super excited to read/listen to the next one.

i end up hving to audio book these books. as i drive for a living. i still get to listen to books. and i really enjoy this series. cant waitnfor book 5 to b on audio book :)