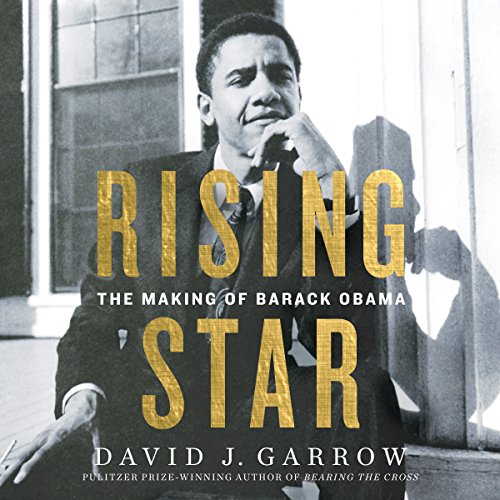 Barack Obama's keynote speech at the 2004 Democratic National Convention instantly catapulted the little-known state senator from Illinois into the national spotlight. Three months later Obama would win election to the US Senate; four years later he would make history as America's first black president. Now, at the end of his second presidential term, David J. Garrow delivers the most compelling and comprehensive biography ever written of Obama in the years preceding his presidency.

Moving around the globe, from Hawaii to Indonesia to the American Northeast and Midwest, Rising Star: The Making of Barack Obama meticulously unpacks Obama's life, from his tumultuous upbringing in Honolulu and Jakarta to his formative time as a community organizer on Chicago's South Side, working in some of the roughest neighborhoods, to Cambridge, where he excelled at Harvard Law School, and finally back to Chicago, where he pursued his political destiny. In voluminous detail, drawn from more than 1,000 interviews and encyclopedic documentary research, Garrow reveals as never before the ambition, the dreams, and the all-too-human struggles of an iconic president in a sure to be news-making biography that will stand as the most authoritative account of Obama's pre-presidential life for decades to come.

I'll update this review, but this is way too long. I was so interested in finally seeing a well-written biography on Obama. I'm 45 min in and still lost on some opener about steel mills in Chicago....no interesting story on Obama. This 56 hour book needs an editor.

What made the experience of listening to Rising Star the most enjoyable?

I was interested in a scholarly and objective treatment of Barak Obama and this book delivers in spades. It is probably the longest book I have ever listened to or read, and it would have been fine with somewhat less detail, but I knew the length before I began listening. Had I stopped reading prior to the epilogue, I would not have rated it so highly, but the last 90 minutes really pulled everything together. The author clearly demonstrates not only how, but why the Obama presidency was such a disappointment----more so to those closest to him than to his foes. If anyone purchases this audiobook and, due to its length, is tempted to stop listening, I strongly encourage him/her to invest an additional 90 minutes and listen to the epilogue.
The narrator did an admirable job and gets a solid five star for no glaring mispronunciations, despite the plethora of obscure surnames.

Best Read I have ever had.


I enjoyed reading the book. It was so long that I went back to read the beginning again. I think the writer was the best I have read. He seemed to have done very good research. The reader was excellent. The part I liked most was the relationship President Obama had with his students. C.S. Brown, Seattle

Well-Researched Narrative on the Life of Obama

Where does Rising Star rank among all the audiobooks you’ve listened to so far?

One of the most well-written and researched books I've listen to thus far far.

I appreciated how well the authored researched the subject and the objectivity of analysis. The author doesn't take over with editorializing the decisions of his life. Respecting the intelligence of the audience to develop their own conclusions. As a fan of the former president, I feel like the book validates my perception of the man at the same time acknowledging his imperfections. You don't accomplish what Obama has in his life without being extremely exceptional and I appreciated how well the author captured that for the reader. I would rate this book as high as Caro's books on LBJ in terms of the depth of research. However, Caro's writing style is flawless and this book, although close, is not as beautifully written as Caro writes. High praise for this exceptional book and I enjoyed every minute.

Have you listened to any of Charles Constant’s other performances before? How does this one compare?

Unfortunately never before but this is an author I will begin to follow.

A book about Barack Obama. But first, a history of the world.

Either the audiobook narrator is accidentally reading the wrong book, or the author seriously needs an editor. I've been listening for an hour and a half and still no mention of Barack Obama! I'm patient, but this is ridiculous. Thank goodness for Audible's return policy!

I thought it was unbiased; it is not

Through a good portion of the book I thought the author's purpose was to present all sides of the 44th president - his qualities, his values, his flaws. He did that, until the last several hours of the book. the whole (short) section on his presidency was nothing but a hatchet job. The only mention of the health care law was the breakdown of the web site. The only mention of Bin Laden was couched in one supposed quote from Obama: "I guess I'm good at killing people." The only discussion of his friends after his first term was how many of them (one is led to believe ALL of them) had come to despise him. According to Garrow, he was a worthless president.

And now look what we have.

Beautifully written. A lot of surprises- I thought I knew all there was to know!

While the subject is good it is written in such detail you can't follow and it makes no difference. For example it doesn't just say he lived on this or that street it gives the exact address including apartment number. Do you really need the apartment number from 30 years ago?

He also will talk about an organization then tell you it's initials. He must do this 20 times. Then 2 hours later he will tell you the initials again like you are going to remember what they stand for.

And names. He gives you the name of everyone he ever meets,and not just the important ones. Is more than a handful of people even going to know any of them?

I couldn't finish it. Don't waste your time or money.

Antidote to the Trump Presidency.

If you could sum up Rising Star in three words, what would they be?

What was one of the most memorable moments of Rising Star?

What does Charles Constant bring to the story that you wouldn’t experience if you just read the book?

Excellent Reader. I wouldn't be able tackle this massive book on my own.

I learned more about Chicago and it’s steel industry than I have ever cared to know. It seems as Obama himself only made a cameo appearance in this piece although I will admit that I only made it to the third installment before giving up. 18 hours was enough for me to cry uncle!