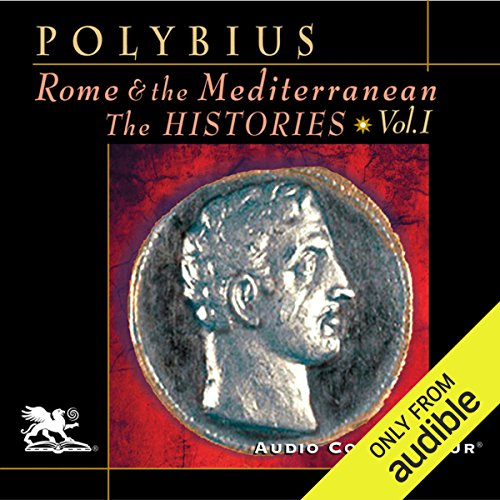 Rome and the Mediterranean Vol. 1

Polybius says that he wrote his Histories "to find out by what means and by what political system the entire world was brought under the domination of Rome..." And as he states, it was an event totally without precedent. Within the short space of about 50 years Rome went from being a provincial leader of an Italian confederacy to become the Mistress of the Mediterranean: Caput Mundi. "Surely there can be no one so shallow or so apathetic of character that he has no desire to know how and under what type of government the Romans were able in less than fifty-three years to bring under their control almost the whole of the civilized world, a passage of events which is unique to history." Indeed. And who better to write such a history than the brilliant Polybius? Polybius was one of the first historians to attempt to present history as a sequence of causes and effects, based upon a careful examination of tradition and a keen scrutiny of the facts. Of all ancient historians, only Thucydides is considered the greater.

Tragically, much of The Histories has been lost. But what remains is singularly dramatic and crucially important. It was Polybius who first made Rome's struggle with Hannibal comprehensible to scholars and later generations of historians. He is still our primary source for information about Hannibal and the events of the first half of the second century B.C. Livy used him as a source, as did Plutarch. And although much is missing, much remains: a review of the First Punic War, a detailed description of the Second Punic War, comparisons of the characters of Scipio and Hannibal, comparisons of the Greek phalanx to the Roman legion, a study of the Roman constitution, the dazzling intrigues of the Hellenistic monarchies, and much more.

Volume 1 begins with a review of events leading up to Hannibal's invasion of Italy. The amazing account of Hannibal's crossing of the Alps is one of the highlights of this volume. Volume 1 ends with Hannibal...

You have to know what your are getting into

I read some reviews that complained this was boring. I quite enjoyed it. Polybius is a bit stuffy at times, but the ancient writers often seem so to the modern ear. The people of the past seem to write in long complicated sentences compared to the way we write today. The names of places and people are foreign to us and it can be hard to follow especially if this is where you decided to start your study of the Punic wars or the ancient world. If you do have a little bit of a background in the subject, I think it is much more enjoyable, although listening to it is no substitute for serious study.

Obviously a Greek accent would probably be more correct, but I always imagine this sort of thing read with a haughty British accent, so I thought the narration was perfect.

A Tragedy So much is Missing!!

Boy was this a treat! As noted, the title is misleading, rather than being a general history of the Mediteranean, this book actually concerns the events that brought the Roman Republic to its zenith--the struggle and eventual triumph of Rome over Cartharge. This work is difficult to follow without more background information, I recommend the listener first try a general introduction to Roman history, such as The History of The Roman Empire, (one of The great Courses), which also happens draws heavlily upon Polybius. With a little more info this book becomes a fantastic listen!

Polybius recounts events from the aftermath of Alexander's conquests to the end of the Punic Wars in a style that is unmistakably modern. Polybius does tend to ramble and go off and tangents, but his analysis is based on well reasoned, logical analysis. He paints a believable picture of the Mediteranean world, free of warring Olympian gods,flying snakes, racial generalizations, tabloid gossip and so many other quirks present in the works of other ancient historians. Better yet,Polybius makes things fun by sprinkling the narrative with snarky comments about the work of other historians and poignant analysis of what history is and is not. According to Polybius, the true historian reports on the evidence he has, he doen't try to psycho-analyze historical figures, put words in their mouths or paint them as caricatures. Whats more, the true historian actually visits the historical sites in question to get a feel for the terrain and evaluate which of several accounts of events was actually feasible.If historians today followed his advice, I think us history buffs would be a lot better for it.

The work really shines in its descriptions of the campaigns and final defeat of Hannibal. One can almost feel the awesome fear his rag-tag international army must have inspired: naked Celts decked out in gold chains, swarthy Carthaginians, seasoned African Cavalrymen, Indian elephant riders and Spanish conscripts. Its amazing the man held them together as long as he did. One other treat was the account of Archamedies using mathematical and scientific know-how to fend off waves of Roman invaders.

Polybius succeeds in coming across as impartial, I finished the book feeling more admiration for Hannibal than for Scipio, which is an amazing feat as Polybius was basically an employee of the Scipio family.

Charlton Griffin is a master narrator, If i could nitpick though, sometimes he comes across as unecessarily evil-sounding when the text doesn't require it.

Sadly, while part one of this audiobook is more or less a seamless narrative, part two resembles the leftovers of a newspaper after it was used to light a beach bonfire. While many interesting tidbits do make part two worth listening to, its really quite furstrating to get involved in the narrative only to find the next four chapters are missing.

A real qualm I had with the book was the total lack of any notes to help modern readers get their bearings. I wish footnotes had been inserted into the text at critcal points, I had no idea where most of the places or barbarian tribes were located and a short (" note, modern day Slovenia") would have been great help . In addition, the essay at the begining was far too critical and made me want to not listen to the book, they should have put it at the end or read one that was more flattering of the work.

Only serious history buffs need listen because too much has been lost.

Have you listened to any of Charlton Griffin’s other performances before? How does this one compare?

Charlton Griffin is excellent, and the audio quality is excellent. The story is a bit disjointed, but that's because most of the books have been lost.

The fact that so much knowledge has been lost.

I am a great fan of early Roman historians. Finding one I hadn't heard of is always a thrill. Polybius emphasizes more of the military aspects as the warring tribes that inhabited Italy coalesced into a unified crucible of the Roman Empire, I'm onto the second volume and enjoying this fresh perspective on an ancient empire,

have read multiple times. does a fantastic job of shedding light on the past. I would recommend this book to any history lover

Charlton Griffin gives another great reading of ancient history. Polybius is required reading for a degree in history but also this will help you to understand why the United States is a republic and not a radical democracy. Ancient historians tend to be biased but Polybius is less biased than others even though he was a captive forced into servitude. Avoid modern revisionists by reading the same sources they do and form your own opinions about history. Translations are interpretations. Feelings are not facts.

This was an absolutely wonderful rendition of Polybius' Histories. The text was the definitive resource on the Punic Wars, and in my opinion this version, narrated by Charlton Griffin, is the definitive audio book.

This account of the Punic wars (part) is simply incredible. It’s the kind of thing that if you think about it, is so big in scope so sweeping in its lasting impact on the modern world, that it can make fiction seem boring in comparison.

The narrator does an excellent job bringing polybius ancient narrative to life with his voice.

The narrator and content are great. No chapter titles so minus a point for that.

The narration is a bit too intense. Great book though for early roman republic history.