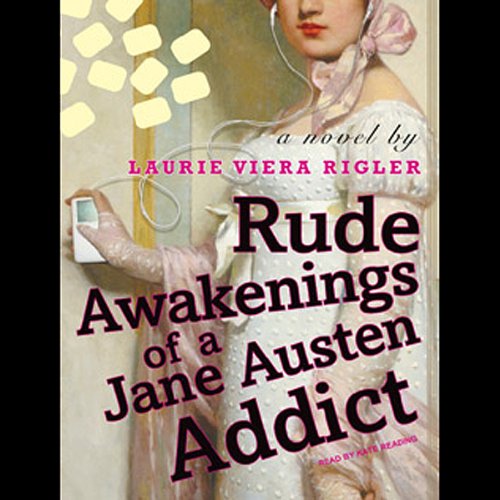 For Jane, the modern world is not wholly disagreeable. She relishes the privacy, independence, even the power to earn her own money. But how is she to fathom her employer's incomprehensible dictates about "syncing a BlackBerry"? How can she navigate a world in which flirting and kissing and even the sexual act itself raise no matrimonial expectations?

Even more bewildering is the friend named Wes, who is as attractive and confusing to Jane as the man who broke her heart back home. It's enough to make her wonder if she would be better off in her own time, where at least the rules are clear---that is, if returning is even an option.

Kate Reading is a fabulous narrator. I have come across her several times and she never disappoints; certainly doesn't with Rude Awakenings. She switches seemingly without effort between that southern California accent of a 2009 modern woman (Courtney Stone) and the cultivated tones of the daughter (Jane Mansfield) of a gentleman from 1813 Regency England.

From one prospective, this book analyses the social values of modern America through the eyes of this woman from 1813. All aspects of modern life as seen through the astonished eyes of the woman who finds herself in a new body and new life are reported with breathless wonder: internet, movies, air conditioning, women with career choices and degrees!, automobiles, make-up, bathrooms with running water (hot and cold), toilets and so forth. The author, Laurie Viera Rigler, through her 1813 self makes some very interesting commentary on the status of women in this new world. She glories in the freedom of choice but points out some obvious flaws or flies in the ointment.

I enjoyed Rude Awakenings even more than Confessions and I enjoyed Confessions a great deal. To accomplish this body, identity, century switch, one has to imagine time as vast fluid entity with every instant touching every other instant; every person connected to every other person who ever was. The rules of time according to this theory are like the rules governing the World Wide Web where every web page is next to every other web page. Perhaps, sometimes, the barriers do break down and Courtney Stone finds herself in 1813 and Jane Mansfield wakes up in 2009 LA.

I liked the first book and this one was a fun listen. This one took us to the "other side" of the first book. We got to understand what was happening during the "switch". I like the idea of time travel or time travel reversal. I enjoyed it and I would recommend to anyone who enjoys romances with sci-fi.

A mix of Jane Austen and time travel

I'm a sucker for a well-executed anachronistic book and this one definitely fits that description. I love Jane Austen's books and the feel of this book is very similar while adding in a modern twist. I really loved this book. I liked Confessions of a Jane Austen Addict as well, but I think this is the better of the two books.

If you wake up and find yourself in a Austin book.

I love the premise of the story. I have read something similar in the past and that book was heavy on the romance. This book, on the other hand, is neither really a romance nor a self-discovery book, thus making it weaker than what it could have been. It also could have been a great romatic/sf/comedy using the differences between the past and the present; unfortunately I think the time slip situation/gag was underutilized in this book. It’s not that I didn’t enjoy this book, I did.

But IMHO the second book is more enjoyable as a self-discovery book and the difference in the era of the main characters are much better used. If I read this book first I might have not read the second book…

a joy to read with Reading

A thoroughly enjoyable book read by one of the best narrators in the business. Kate Reading's facility with accents and her ability to give an individual voice to each character truly make the story come to life.

If you read and loved Confessions of a Jane Austin Addict, you will also love this book. I recently saw that there was a sequel, so I went back and listened to Confessions again. I enjoyed it very much, so I bought Rude Awakenings. It was very funny, I caught myself laughing out loud quite a few times. I always wondered what happened to Jane in Courtney's life, I am glad she wrote a book to answer all of those questions.

If youre a Jane Austen fan, or like light hearted funny stories, I highly recommend Confessions and Rude Awakenings.

It is not even cute - it is LAME - narration is flat - don't waste your money!

Both books in the set are a fun easy read. I love Kate Reading (most of her work not all) I like the premise of switching souls into other bodies other times. It actually scares me! How truly frightening to wake and not know who you or anything around you and you are in someone else’s body and life. Tho both these women take it much too easily especially in this one coming from the past to hundreds of years in to the future! You have no insight into modern times and inventions. The other way around most people would have knowledge of history past .

If you’re looking for fast easy read they make good background books to keep you company while doing other things because neither require much mental attention which I find makes the best company for boring busy work to get easily done. ☺️

I laughed out loud numerous times!

For sure the storyline was a stretch but this was a super fun book! I laughed out loud numerous times, which is rare for me. My only complaint is the ending. In the first book "Confessions of a Jane Austen Addict" it ended with Courtney being returned to her correct time. (Unless I completely misunderstood what was happening!) In this book, Jayne stayed in Courtney's body. ??

This was okay, but not fantastic. The book description explains the plot very well. The story is predictable and you can probably imagine what goes on in the story. The narration is good - Kate Reading is always good.