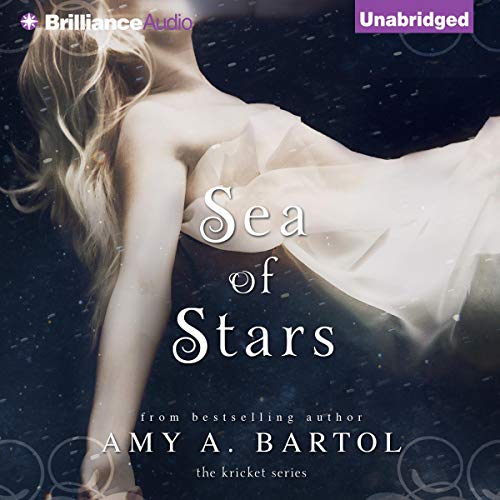 The highly anticipated sequel to Under Different Stars, winner of four 2014 utopYA Awards.

Eighteen-year-old Kricket Hollowell was looking for her place in the world when she discovered that the universe was bigger - and more dangerous - than she had ever dreamed. Now, whisked across space to the planet Ethar, Kricket learns that her genetic ability to see the future makes her a sought-after commodity...and the catalyst for war between her star-crossed parents' clans. According to Alameedan prophecy, one house will rise to power, and the other will be completely wiped out, and Kricket's precognition is believed to be the weapon that will tip the scales.

A target of both the Rafe and the Alameeda houses, Kricket finds protection - and a home - in the arms of Trey, her Etharian bodyguard-turned-boyfriend. But her visions of what's to come disturb her deeply, especially since she must discover whether the gift of foresight will allow her to rewrite the future or if her fate is as immovable as the stars.

We get it, she's in love

I felt like this book was just trying to move from one sexual encounter to another. Which was extremely frustrating to me as I find the general premise of the book extremely compelling, and refreshingly different from so much of the ya fiction out there right now.

Sex is sex, and it wasn't even that the characters tried to find every possible opportunity to bang (need to pee in the woods? How bout some sex?), it was the overly descriptive style that really bothered me I as pictured young women and TEENAGERS reading this book. Yikes.

I actually sometimes felt like I was reading a trashy romance novel instead of a creative, refreshing piece of fiction.

So much potential, and I think the story could really be something special, but I really believe in instances such as this, that there is real power in authors who can really own the "less is more" mantra. Love is so multi faceted. I'd love to see books that focus and explore more of the those facets than just the carnal.

There were elements of that in this book as the characters talked and seemed to get to know each other, I would just like to see more of that kind of depth in a relationship rather than moving from one super steamy sexcapade to the next.

I would have rated at least 4 or 5 stars otherwise.

Would you try another book from Amy A. Bartol and/or Kate Rudd?

The first book had a little bit of a unique story line...moving into this second segment, it felt like the author just wanted to write one sexual encounter after another. The lines were so cheesy, I flinched a few times. .Plus, there is some repetitive, yet bizarre content: multiple times in almost every chapter,, someone is picking up the main character, Kricket, and setting her on their lap. Or some soldier is rubbing her back. There were wierd fillers like that in every chapter (what the heck?). The content became more and more bizarre as the book progressed. The actual plot isn't too bad...but everything in the middle is painfully corny or sexually explicit. Every time the listener believes that they are going to find out what is going to happen (plot-wise), the main characters are stopping everything to have sex. Sexual encounters seem to be the priority, even while fleeing evil psychics, an entire enemy army (oh yeah, and full enemy occupation of their country), and an obsessively jealous, psychopathic suitor. Though I could compliment Amy's imagination, the execution of the storyline is poor, at best.

Would you be willing to try another one of Kate Rudd’s performances?

Probably not-her interpretation of the 2 main characters is partially why I found them to be so annoying.

Disgust...as I described before. It got to the point where the lines were so corny, I flinched.

Save yourself a credit and move on.

Far too much sex. the story line is excellent and it could do without the mad bunny love. the only upside, if you could call it that, is that it's not as descriptive as other romance novels.
I wouldn't recommend this to any YA that plans to hold on to their virtue.

OMG... I don't know why I had to finish it but I did. just because there are spaceships and other planets doesn't make this any less a sappy romance novel. I was so happy when our heroine got nabbed because she was feeling so lusty towards our hero. That was the most satisfying moment. these two were lusting for each other throughout the whole book; despite bombs; despite evil plots that they were. fully aware of; despite criminally insane people surrounding them, they couldn't keep their hands off of each other.... Just don't understand writers like this. I promise you every 10 to 20 pages they are lusting after each others bodies. even when they're supposed to be quiet and hiding from the enemy they're passionate and loud. I was actually happy when it all went wrong for them. I rarely give this kind of negative review if there's just enough imagination. this author has imagination but she's clearly not getting enough and tries to live vicariously through her characters who seem utterly childish and foolish. very disappointed.

I really like this series. Kricket is pretty funny and her relationships with the other characters are great.

The writing style is descriptive enough that you can get a clear of everything but not so detailed that it puts you to sleep. Apparently, that's harder to pull off then one would think because I can only think of a handful of writers that can accomplish this. Most are only OK.

A huge pet peeve of mine is when the characters reactions to what is happening are not realistic. There have been a lot of books that I have not been able to finish because I just thought the reactions were so stupid. But all of the reactions are pretty spot on. Kricket is not a soldier so I don't expect her to act like one. And she doesn't. She cries and gets mad and even throws up once because she's so upset. That's realistic. That's good writing to me.

I don't hand out very many 5 stars but I think this series deserves it. I only wish I'd waited until all the books were out to start the series. I hate waiting.

Just as good as the original and yet making me long for the next instalment. Such a great heroine and interesting world building and accessory characters.

Why did it have to end! I need more....!!! I can't believe this is happening. I hope the third book comes out soon.

High speed chase for the majority of the book

I love how she portrays Kricket

I just wish Book 2 gave us a LOT MORE background to the ALAMEEDA. It makes sense that they're portrayed as the bad guy as it's told from Kricket's point of view as an half ALAMEEDA, half RAIF who's being stalked and heavily pursued by an obsessed admirer and his countrymen led by a BROTHERHOOD (that MALE-dominated, racist, and power hungry).
Personally, I don't think ALL ALAMEEDA are evil. But the ones Kricket encounters pretty much follow Kyon's orders, is Kyon himself, or wants to kill her.

Just a personal preference. But I think it wasn't necessary to spend so much time with the non-graphic sex scenes. It's not graphic. But it's not a fade to black either.

But hopefully, the next book would give us more insight into the females of Ethar (who as hinted in this book are not given much opportunities to lead and make their voices heard). And I'm not just talking about the Priestesses either.

But overall, I enjoyed the book because I often love hearing Kricket's POV. I love hearing her sass people! She's intelligent enough to give witty retorts and give a metaphorical and sometimes literal "F**K YOU" (Though she never says that in the book because this is still a YA novel) to anyone who underestimates/oppresses/tries to kill her. But vulnerable enough that you want to give her a big, warm embrace. The only times I wasn't too keen on hearing things from her POV is when she's waxing poetry on Trey's features. I get that your a girl in love Kricket!

But as I said, I love how she outsmarts most of the people in this book. And the only way she ever ends up with the ending of this book is because of something that was totally out of her control.

What other book might you compare Sea of Stars to and why?

i think it is similar to Cinder with the futuristic like way of presenting the story. really great read.

I just love how Cricket reacts to situation.

I have listened to this narrator in another book and really hated the way she did her narration but she does fantastic in these books!