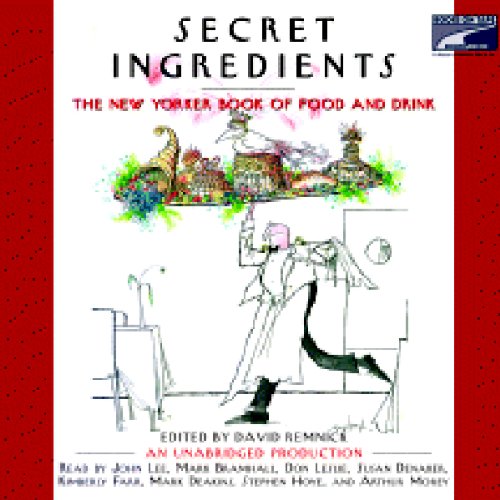 Since its earliest days, The New Yorker has been a tastemaker - literally. As the home of A. J. Liebling, Joseph Wechsberg, and M. F. K. Fisher, who practically invented American food writing, the magazine established a tradition that is carried forward today by irrepressible literary gastronomes including Calvin Trillin, Bill Buford, Adam Gopnik, Jane Kramer, and Anthony Bourdain. Now, in this indispensable collection, The New Yorker dishes up a feast of delicious writing on food and drink, from every age of its fabled 80-year history. There are memoirs, short stories, tell-alls, and poems - ranging in tone from sweet to sour and in subject from soup to nuts.

M. F. K. Fisher pays homage to “cookery witches,” those mysterious cooks who possess “an uncanny power over food,” while John McPhee valiantly trails an inveterate forager and is rewarded with stewed persimmons and white-pine-needle tea. There is Roald Dahl’s famous story “Taste,” in which a wine snob’s palate comes in for some unwelcome scrutiny, and Julian Barnes’s ingenious tale of a lifelong gourmand who goes on a very peculiar diet for still more peculiar reasons. Adam Gopnik asks if French cuisine is done for, and Calvin Trillin investigates whether people can actually taste the difference between red wine and white. We journey with Susan Orlean as she distills the essence of Cuba in the story of a single restaurant, and with Judith Thurman as she investigates the arcane practices of Japan’s tofu masters. Closer to home, Joseph Mitchell celebrates the old New York tradition of the beefsteak dinner, and Mark Singer shadows the city’s foremost fisherman-chef.