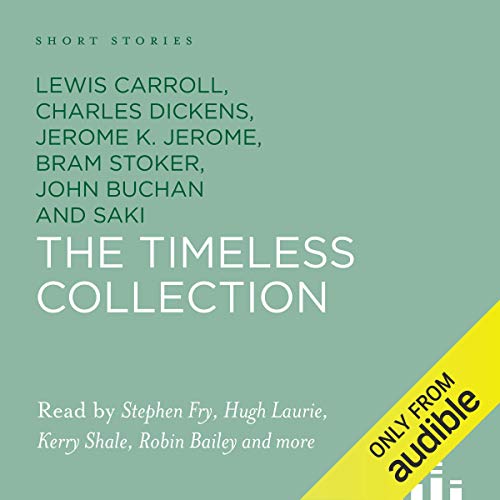 The stories in this superb collection are as follows:

What an odd use of excellent materials

What would have made Short Stories better?

The stories were well chosen, mostly ones I had already read but enough new-to-me gems to keep this interesting. The problem with the presentation is that it is disconcerting to have only SOME of the stories introduced with the story and author names [and better yet, narrator name, too]. How much time and money could a fast identification per story have added? A Table of Contents (and a better way to search by story) would have been a HUGE help.

The bottom line is that this could have been SO much better with simple better organization. All of the individual pieces were good; the fault was in the package.

The narrator selections were wonderful. What's not to love about the line up? Hugh Laurie, Patrick Malahide, Stephen Fry, Mamie McCoy go without saying, but Nigel Hawthorne reading Lewis Carroll could have been the highest point, even if the Carroll story wasn't the strongest literature.

The readers do not read the names or authors of the stories. This is very weird. It is hard for me to enjoy the stories without first hearing the title and author of the story.

There's work to do

Although the content of this book was very good and the readers excellent I was very disappointed not to have a list of contents, ability to search and find a story to listen to again and a too-quick follow-on from story to story. At the very minimum a content list should be provided to enhance enjoyment.

A veru good collection of short stories from a variety of master authors. What more could one ask?