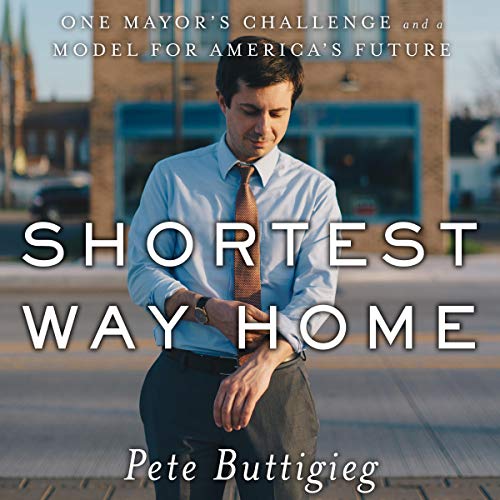 A mayor's inspirational story of a Midwest city that has become nothing less than a blueprint for the future of American renewal.

Once described by The Washington Post as "the most interesting mayor you've never heard of", Pete Buttigieg, the 36-year-old Democratic mayor of South Bend, Indiana, has improbably emerged as one of the nation's most visionary politicians. First elected in 2011, Buttigieg left a successful business career to move back to his hometown, previously tagged by Newsweek as a "dying city", because the industrial Midwest beckoned as a challenge to the McKinsey-trained Harvard graduate. Whether meeting with city residents on middle-school basketball courts, reclaiming abandoned houses, confronting gun violence, or attracting high-tech industry, Buttigieg has transformed South Bend into a shining model of urban reinvention.

While Washington reels with scandal, Shortest Way Home interweaves two once unthinkable success stories: that of an Afghanistan veteran who came out and found love and acceptance, all while in office, and that of a Rust Belt city so thoroughly transformed that it shatters the way we view America's so-called flyover country.

Elevated the status of city Mayor.

Such an intelligent man !

I listen to the complete book in one day...just couldn't push pause ! So interesting.

A great listen from a great leader

I really enjoyed hearing Pete's story in his own voice and words. Including some of his faults made him more of a real person.

Relistening to this soon.

Made me question my own life choices- in a good way. Thank you, Pete, for sharing your story.

Thou of course another election memoir it surely has demonstrated the life stories and genuine values of Mayor Pete as a somewhat nerdy and younger elected official who’s practical and quick-to-action enough to do good to the public.

Great stories with great details yet I found the most fascinating chapter being the dating one lol.

I really enjoyed this book. It was thoughtful and entertaining. Very easy to listen to.

I usually don't like autobiographies because I end up no longer liking the author. Most I find sound full of themselves, and turn me off. But not with this book! Pete Buttigieg is so humble and self-deprecating, and spends very little time on his incredible accomplishments (Harvard, Oxford, his ability to speak many languages, etc.), and instead devotes more time to the campaigns he lost.
I also found that a guy with his credentials and accomplishments could so easily talk down to people, but he absolutely doesn't!
This book was a real pleasure to listen to, and I hope with every fiber that Americans don't pass up an opportunity to elect such an intelligent, tactful, classy #46! If you don't, on behalf of Canadians, we want Pete!

one of the best biographies I've ever experienced

I could not stop listening. I felt like we had so much in common, minus the mayor and Military portion of Our Lives. really insightful and a look into the private life other man that should be the next president.

this book is a nice warm bath of a read. often the book has wonderful personal incites. there was a cringe worthy chapter which recounted the advancements of phone and picture tech, which I briefly toyed with skipping, the remainder was much enjoyed. for myself, a service member with aspersions of political office, and gay, I welcomed the message and its messenger. worth a read slash listen too.

I have been reading books and papers written by current candidates running for President. I am a lifelong Democrat be side I care deeply about the U.S. Constitution and the diversity that is America. I had candidates that interested me before seeing how many candidates there are runnjng. I like Kamala Harris, Cory Booker and Julian Castro.

I knew nothing about Pete Buttigieg except that he was Mayor of South Bend. When you say Indiana to me, I think of Pence and Notre Dame, neither being favorites of mine. I saw Buttigieg interviewed on CNN and other TV appearances such as Late Night with Steven Colbert. I was impressed. I wanted to know more about him. I saw he had authored a book about his life. It was on Audible and he was the narrator of his own story.

Pete Buttigieg is experienced beyond his actual years. He speaks Arabic and other languages. He is veteran being serviced in the Middle East. He is a Rhodes Scholar. He has worked analyzing data for the private sector traveling all over the world. He is Mayor of a complicated city in midwest. He is a person who truly knows words and understands their weight.

I am intrigued by Pete Buttigieg. I want everyone to read/listen to his book. Know about him before you decide. I know the majority of candidates will be on the sidelines within the year. I hope Pete Buttigieg is still a viable candidate as I feel he has an important voice in this election.

This book was way out of my usual reading zone, so I was skeptical when I got the sample. But after hearing the sample on Audible, I quickly bought it. Truthfully, it is a great book! Pete reminds me of a young JFK. I don't say that lightly. The easy way he has of communication in difficult situations and remarkable intelligence for someone so young is stunning! I mean his name, Pete Buttigieg, is one you are going to hear for many years to come in American stage of politics! I encourage you to sample this book and I am sure you will be intrigued to listen some more. It is easy to really delve into his world, and get to know this up and coming politician. 5 Star Book!

This book gives hope for the future

I enjoyed meeting Pete through this book and his narration. At 60+ years old, I did not expect to be impressed by him, but surprisingly I found his story and work to be important information as I ponder the upcoming 2020 presidential election. In the book, he came across as authentic and very different from other political hopefuls. I don't know if he can get to the presidency, but he did give me hope for a better future.

such an amazing and articulate story. Pete is earnest and hopeful for progressive idealists everywhere.

The Future We Can Elect Today

Powerful. A message the country needs to hear. Listening to his journey so far makes me even more excited to see where his campaign takes him. Kudos to Chasten for letting the rest of the country take a peek into an inspiring message about the strength of community, love and commitment.

The Shortest Way Home restores hope in people, political leadership, and the future of our world. Any community, state, or nation of people would be fortunate to have the kind of thoughtful, reflective human represented in these pages, in positions of public service.

Mayor Pete's story is inspiring and marks the start of the next generations rise in political leadership.

loved it. Pete does a great job narrating and painting a picture for you to imagine.

Pete is so open and genuine. You won’t regret listening to his story and that of his hometown of South Bend IN. Now a NYT best seller!! Enjoy!! Thanks-Pete!!!