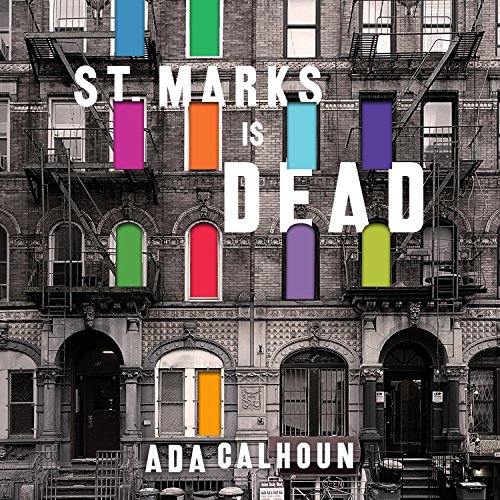 St. Marks Place in New York City has spawned countless artistic and political movements. Here Frank O'Hara caroused, Emma Goldman plotted, and the Velvet Underground wailed. But every generation of miscreant denizens believes that their era, and no other, marked the street's apex.

This idiosyncratic work of reportage tells the many-layered history of the street - from its beginnings as colonial Dutch director-general Peter Stuyvesant's pear orchard to today's hipster playground - organized around those pivotal moments when critics declared "St. Marks is dead". In a narrative enriched by hundreds of interviews, St. Marks native Ada Calhoun profiles iconic characters, from W. H. Auden to Abbie Hoffman, from Keith Haring to the Beastie Boys, among many others. She argues that St. Marks has variously been an elite address, an immigrants' haven, a Mafia war zone, and a hippie paradise, but it has always been a place that outsiders call home.

"Rather than a nostalgic lament, this revelatory book celebrates an indelible cultural imprint." ( Kirkus)

Content is interesting, but book is not well written

Who would you have cast as narrator instead of Carla Mercer-Meyer?

This person reads with no understanding of grammar or content.

Do you think St. Marks Is Dead needs a follow-up book? Why or why not?

Would you consider the audio edition of St. Marks Is Dead to be better than the print version?

Only if Houston Street is correctly pronounced — Hous-ton

Which character – as performed by Carla Mercer-Meyer – was your favorite?

I thoroughly enjoyed reading about my old neighborhood. Born and raised on the Lower East Side, it was great hearing its history before, during, and after, my time there. I tried, unsuccessfully, not to recoil when Houston Street was mispronounced early on in the audio book — an especially egregious error for a native of 484 E. Houston. I eventually recovered from the chokehold, for the moment, when the narrator self-corrected, afterward.
“Hous-ton,” unlike the city in Texas, “You-ston,” are world's apart — as much removed as the erroneously used synonym we used for sociopath (cowboy). Mispronouncing Houston during my youth, when crime was rampant and New York City out of control, served as an accelerant for street thugs to hastily improvise an assault. Those unfamiliar with the environs they stumbled upon paid a hefty price for the memory.
I wanted to praise this book and briefly conclude with something clever, like, “There is no U in Houston.” But, there is.
Just eight short blocks south of St. Marks Place (8th Street), Houston Street is silent in comparison to the wilds of St. Mark’s, as is the U in Houston Street, with its emphasized H. Does that help? Probably not, as the only surefire way to not say Houston like a Texan is to live in New York City.
Save yourself from the “Victim File” by respecting ways in which words are spoken in unfamiliar haunts. I highly recommend this book and truly enjoyed it. My one and only criticism was not intended to monopolize this review, ad nauseam, but it precipitated this writing. So, I guess it's all good. But should the impetus for a 5-star review be less than stellar due to mispronunciation?
As previously stated, Houston Street was corrected by the second, and I believe, final mention. But, what about the first? This book is not “small town.” It's about a celebrated neighborhood, my neighborhood, often referred to as the most famous, world-wide. But, the stone in my shoe is still there.
Small things matter in any art form. It's like a musician who flubs a note in the first chorus, then corrects it in the second. It's still a bad note, and must be absolutely faithful when releasing a final take, or recording — or, an audio book.
Remember, this is a fun and fast read, especially for natives of Manhattan, the original and great city of New York, New York — Manhattan. It's for all those intrigued or just curious with the subject matter, which is vast — all the more reason for pinpoint accuracy.
But, I'll remember Houston Street.
Frank Mileti

Wonderful history of a wonderful place.

What did you love best about St. Marks Is Dead?

I loved peeling back the layers of my favorite part of Manhattan. The history of St. Marks Church was especially interesting.

Jimmy Webb from Trash and Vaudeville, who I often saw around the neighborhood while working in a bakery on Second Avenue. What a character! Also much respect to the New York Dolls:)

Did Carla Mercer-Meyer do a good job differentiating all the characters? How?

This isn't fiction and had no dialogue, so this question isn't really relevant.

Emma Goldman and her story were especially moving and interesting.

The narrator mispronounced many place names in a way that would make any New Yorker cringe. Proper script prep and research would have done true justice to this book. We don't have any streets named after towns in Texas in the city, FYI.

If you can, listen at the subject

Interesting history of a storied place.

Told by someone who grew up in the neighborhood, it tracks a place's role in our cultural history and raised the question "what's next?"

The story was great - and will be particularly interesting to people who lived in the East Village prior to 2000. The narrator has a young voice - but maybe she is too young. Referencing a local 'zine she made it rhyme with "vine." There were other awkward pronunciations - or just wrong emphasis. It was competent though - still worth the listen.

Never before have so many details been presented about such vapid events. It does warrant 2 stars for informing me that Norman Mailer helped found the Village Voice. Downhill from there. To make matters worse, narrator is a dead ringer for Siri. Book about the East Village and Houston St. Is mispronounced like the name of the Texas city? Gimme a break! Avoid this one---the idea is far better than the book, and the narration is monotonous.