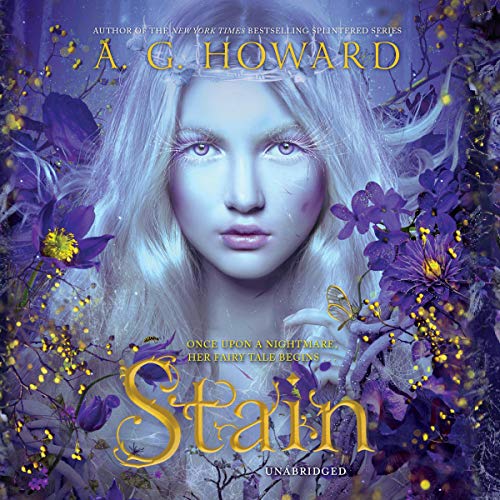 After Lyra - a princess incapable of speech or sound - is cast out of her kingdom of daylight by her wicked aunt, a witch saves her life, steals her memories, and raises her in an enchanted forest...disguised as a boy known only as Stain. Meanwhile, in a rival kingdom, the prince of thorns and night is dying, and the only way for him to break his curse is to wed the princess of daylight - for she is his true equal. As Lyra finds her way back to her identity, an impostor princess prepares to steal her betrothed prince and her crown. To win back her kingdom, save the prince, and make peace with the land of the night, Lyra must be loud enough to be heard without a voice, and strong enough to pass a series of tests - ultimately proving she's everything a traditional princess is not.

I love fairy tales. The kind with magic that feels like childhood common sense, where terrible things have to happen because the wonderous could not happen without the sacrifice. The kind where the end is spelled out from the beginning, but you fall in love with the beautiful scenes and cruel losses of the journey. The kind with language and laws so simple but finely arranged that they seem like poetry. Real love and effort went into its telling, from the written words to the voices of the narrator. If you are a fairy tale fan, I urge you to give this tale a try. It is worth every moment of its 20+ hour run time.

One of the best I've ever heard!

I am an avid audio book listener for a few years now and this story and performance has got to be one of the most special I've heard. Really fantastical and original, what a joyous find.

Was hard to get into, but worth while in the end.

I started listening to the audio novel a few months back, I found that I wasn't intrigued with the storyline. so I revisited a few months later and started from the beginning, it's a story with a slow start but well worth the wait.

I finished it in three days - I would have burned through it faster if I hadn’t been busy with other things. I’m so glad I found this read. I absolutely adored this story. As a critical reader, I found very little wrong with it. The plot was fantastic and well thought out and the story had me interested the entire time. There were some moments that were so incredibly frustrating that I wanted to scream and a couple moments that were semi-ridiculous, but completely forgivable in the grand scheme of things. This book is basically everything that I could hope for in a fantasy/fairytale. I highly recommend it to anyone looking for a lighthearted and fun story to listen to.

Great book audio takes a bit to match names up to bio.

Great book. With all the weird names it takes a bit to realize who is who.

I just couldn't get into the story

I listened for about 2 hours. There were parts that were pretty good. But the story line jumped around way too much and it just did not hold my attention. I rarely abandon a book and almost never abandon an audible book. But I had to stop this one!

I think would have enjoyed the story in print

I probably would enjoy the book in print, as I love A. G. Howard's work, but the narrator makes it very difficult to listen to. His accents and voices for the characters end up too ridiculous at times. His voice it pretty bland too and I often have a hard time paying attention to the story, and have to re-listen to parts. I am only on the second chapter and considering quitting because of his terrible character voices. I should have bought the book in print, and I feel like I have wasted an audible credit.

This was an amazing story! The world and story A. G. Howard can weave together is second to none. If you like high fantasy, you'll love this book.

I am used to fast pace tales and after the first chapters I knew this wasn't going to be a tale like that. The author took time to build the story and put in details that wove a fantastic tale to be enjoyed slowly. I was never bored and never thought to put the book down. This is a great tale with lots of detail that covered every question you would have when reading it nothing was left out. Oh and the vengeance taken by the characters wronged was beautiful...

Typically, I really enjoy the Fantasy genre and the occasional fairytale-based. I found getting through this long audio difficult and tedious. By the time I realized I just really didn’t like the book, it picked up a little. That said, I committed to listening and finishing Stained. From time-to-time, (rarely) I will decide to not finish an audiobook but I will give fantasy books a little extra time to engage-especially if it requires setting up realms and complicated characters. I really wanted to abandon this book a quarter of the way through but for some strange reason, I decided to see it through to the end. I don’t usually listen to books that annoy me. I found myself rolling my eyes and really struggling with the experience. It might come down the fact that it just wasn’t for me. To be fair, I believe that some or many people may enjoy this audio but The plot, characters and storyline was simple yet it managed to get caught up and convoluted. It was dragged out to the point of pain -a bit like this review. I found the dialogue to be self-indulgent, disconnected and the characters to be ridiculous. I could say much more but I will leave it to this: If you want to get lost listening to a rambling fairytale, and you don’t mind stories that continue well past a reasonable ending point, then go for it!

I have never been so taken by a book, captivated by the first page. From all the twists and turns I was smiling, crying and gasping out loud! The story was so well written I only focused on how beautifully everything blended, now I need to tell everyone about this book, if you are unsure and want a second opinion take mine and enjoy the ride! You won’t regret this purchase. A.G. Howard has firmly taken place as my favorite author.

This is a good story with great morals like all good fairytales, one I will read again.

The story in the book was slower than the books I normally read. However, it was worth taking the time to listen to, because the story built up to become something magical.