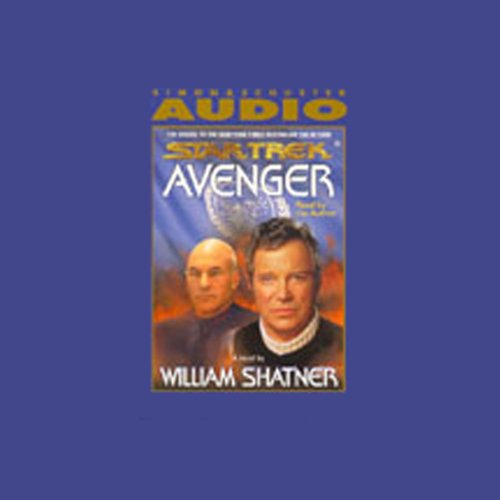 A lethal virogen, inimical to all conventional forms of plant life, threatens the entire Federation with starvation and dissolution. In this moment of Starfleet's greatest need, Captain James T. Kirk, long believed dead, embarks on a desperate quest to find the true source of the mysterious virogen. Elsewhere in the galaxy, Ambassador Spock, his diplomatic efforts stalled by the spread of famine and chaos, returns to his native world of Vulcan to confront a mystery of a deeply personal nature - an investigation that soon leads him to a reunion with a long-lost friend he never expected to see again. Kirk and Spock, together again, must join forces to save a new generation from an awesome menace unleashed by a ruthless interplanetary conspiracy.

The riveting sequel to the New York Times best seller The Return!

When I first read The Return, I thought it was cute that Shatner brought his character back to life and allowed Kirk to interact with ST's current stars. Sure, it's campy as all get out, but it's fun.

One criticism is that I think Shatner tries to hard to drop the name of every major ST character there is. One would think that Starfleet only had 10 officers capable of working together and sends them everywhere.

Fun to listen to at work though. It makes pouring over spreadsheets less painful.

It was nice seeing Kirk back to himself after previous book, but felt a bit rushed to me. Unabridged would have been nice, but I liked the added sound effects and music. Overall if you like Shatner and Kirk, you'll enjoy it.

The story was well written and fast paced. William Shatner provides a superb dramatic reading. I am now hooked on these books.

More of the Same: Everything Saved by the Narrator

This book continues the same problems in The Return. Huge issues are brought up and solved with a single sentence. How Kirk got from the Borg Home World to here, now, is all explained away with I think three sentences. The whole Federation is "dying" because of a single virus, but the problems of the Federation that make is so fragile are never examined. It is just stated "dying."
Painting the ST universe with such wide brush strokes is hard to take in after getting such great detail and character development over the years from writers like Diane Duane.

if ur a trekky this is a must

Shatner is actually very good at this.

Bill Shatner is a very engaging voice actor. The story is not bad at all, my only complaint is that it feels rushed at certain points. But overall a very nice listen.

neither plot nor narration was as pleasing as its prequel, "the return. " I found parts to be rather forced, maybe even slightly out of character.

overall Shatner performance was great! The story was good even though some elements were off for characters

Not as good as the book

This was probably the best of the Shatner-verse books.

Unfortunately you'll enjoy reading the book more. Shatner's performance is fine, the production is fine but this has been adapted and as such, is missing parts from the book itself.