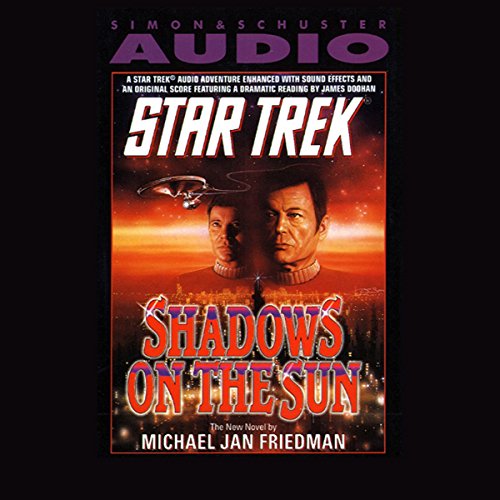 Star Trek: Shadows On The Sun

As a young doctor with a beautiful family and a promising medical career, Dr. McCoy thought he had it all. But when his beloved wife suddenly broke off their marriage, McCoy fled to Starfleet intent on burying his pain in the depths of space. Now, some 40 years later, the U.S.S. Enterprise is ordered to transport a group of mediators to the planet Ssan, a world where assassination is a long, time-honored tradition. Dr. McCoy is suprised to learn that his ex-wife, now remarried, is one of the mediators. But before he can begin to face his feelings, she and Captain Kirk are trapped by a band of deadly assassins. Suddenly, McCoy is at the center of an explosive civil war, where he is the only one with the power to save the woman who once broke his heart.

I enjoyed this story. It was good to hear James Doohan. I'm a huge Star Trek so I might biased towards the book. If you want a quick listen and to hear the voice of one of the originals then get this. Hi Sarah and John.

Not Fleshed Out Enough...

I read this because I'm a huge McCoy fan and I was dying to see him with a really fleshed-out story that hits his heart and soul. This didn't quite cut it, as the characters and the conflict felt more like it was going through the motions of a predictable plot than anything truly enlightening or deep about anyone's character (Kirk, McCoy, Jocelyn, or her new husband). The Ssani culture was, however, interesting, and I loved the philosophical discussions we saw between young McCoy and one of their assassins. But otherwise, the description and development seemed too easy and predictable, like the rest of the novel. Sad McCoy fan over here. *sniff*

That said, hearing James Doohan voice the story and all my favorites was an absolute pleasure. He did pretty well with McCoy's irascible voice and Clay's Georgian accent.

The voice of James Doohan makes the show.

Would you listen to Star Trek again? Why?

I love the old Star Trek optimism and style. The music that accompanies is perfect. Great escape from the ordinary for a while.

This was a good chance to bring out Dr. McCoy's past a bit. Mostly though, I like to hear the original stars. James Doohan has a great voice and can bring the other character's voices into his reading. He knows their style and pace of speaking.

Doohan has a perfect reading voice. It brings back memories of the original. He can mimic for lack of a better word, the voices of the other main characters extremely well.