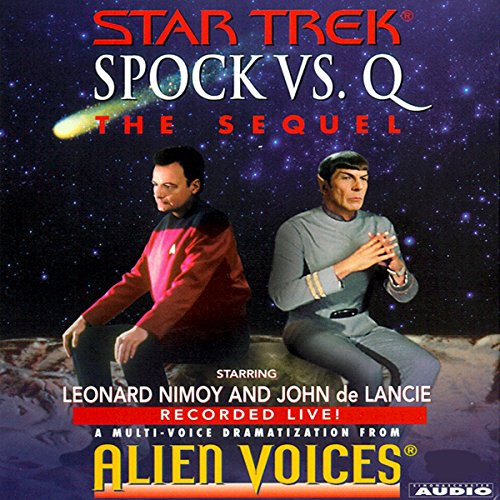 Following their debate over the fate of mankind, Spock and Q have continued their discussions over a meal. After dining, the two return to the stage to recount their repast, which included encounters with several of Spock's former shipmates. However, at the moment the two verbal sparring partners shake hands, a power surge places them in total darkness. Suddenly, Spock and Q are no longer on stage, but somewhere in deep space. As they struggle to determine what has happened, a curious personality change takes hold. Spock is overcome with giddy delight. Q is much more serious, even...logical. Masterfully performed by Leonard Nimoy and John de Lancie, this is a fascinating and often hilarious role reversal that reveals previously unknown sides of Spock and Q!

Ever wanted a Q and Spock Freaky Friday story? This is it!

The most annoying Star Trek character along with the most beloved character.

The only downside is that it’s only an hour long! :(

I really enjoyed the personality swap of Spock and Q. I have both the original and The Sequel and have laughed every time I listen to it.

I love both the Original and the Sequel, and to be honest...the person who advised against it can't even spell the title right so how should we trust that this person even can read any of the other Sci-Fi books out there. They are out there...I just don't enjoy them as much as the Star Trek and Star Wars universes. 9 out of 10 for me

I heard the fist one some time ago I got it on tape from a dicount shop, and it was a good buy, as was the Sequel, I think the first one was better, bu if you like Spock and Q as characters then you like this.

got to love Star Trek

All Star Trek fans will love this

What made the experience of listening to Star Trek: Spock vs. Q, The Sequel (Adapted) the most enjoyable?

The unbeatable combination of characters: Q and Spock. The characters (and their actors!) are so great together. And it's wonderful to have this to listen to now that Mr Nimoy is gone.

So fun to listen to. And short enough to finish in one day! If you listened to the original Spock vs. Q, don't miss this sequel.

Love it!!! Just right for the imagination. The laughs helped and great job by the actors. Looking forward to others.

Very funny voices and there TOPICS very funny wait did I already say that well say I said it again!

Spock Vs Q is a brilliantly funny conversation that the continuum has to offer...
I Highly Recommend This To Each & Every Fan...

Entertaining but not as good as the first.

Worth listening to at least once if you really enjoyed the first crossover between Spock and Q. They really are a delight.