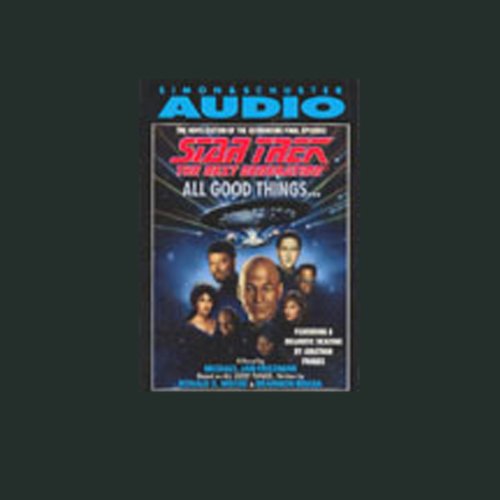 Star Trek, The Next Generation

Seven years ago, Captain Jean-Luc Picard faced the judgement of the Q Continuum, a race of beings with godlike powers over time and space who presume to gauge humanity's fitness to exist in the galaxy. At that time, they suspended judgment, but now their decision has been reached: the human race will be eliminated, not only in the present, but throughout time. Humanity will have never existed. The only chance to save mankind lies with Captain Picard. An old enemy has granted him the power to revisit his life as it was seven years before, and experience his life 25 years in the future. But as he fights to save the human race from total extinction, Picard has been set up to be the unwitting agent of mankind's destruction. In his effort to save humanity, he must sacrifice himself and those he loves...perhaps more than once. And if their sacrifice fails, all mankind is doomed.

The explosive finale to the most successful syndicated drama ever!

Very well done, interesting story that keeps moving. Jonathan Frakes does a great job with the voices. Best of the Star Trek TNG audiobooks on audible.com

Season finale was shorter yet fuller.

Don't want to go into a rant because I still recommend listening. In short, it does a decent job being a novelization of the events that occur in AGT.

This reads more like a regular Picard centered episode of TNG whereas the series finale was the perfect send off for the crew of the Enterprise D tying a nice bow on the series.

Also they didn't include one of the best moments of the episode.

Trek on the go is never a bad thing

Would you listen to Star Trek, The Next Generation again? Why?

On a solo roadtrip maybe, but when you have the episode there isn't a need to beyond that.

Which character – as performed by Jonathan Frakes – was your favorite?

They were all good as Frakes understands the characters and the motivations so it was easy for him to bring that across.

As with most of the S&S Star Trek Audiobooks, being abridged hurts it.

it was a good story.

it was a good audio outdoor adaptation of a series finale. Jonathan Franks also did a great job in narrating. Although it is an abridged summary of the episode.

Mr. Frakes is masterful in his Picard accent.

Although a little too close to the television version this audio capture of the final episode of Star Trek the Next Generation is proper. Jonathan Frakes does a masterful job working the voices of the different characters through the plot. The tone set by the background audio is purposeful and brings a lot to the story in keeping my attention.