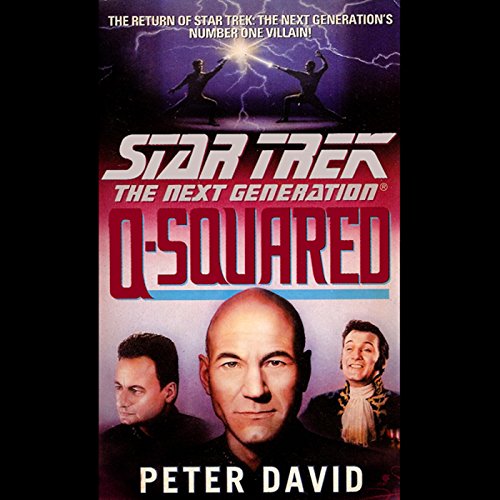 In all of his travels, Captain Picard has never encountered an opponent more powerful than Q, a being from another continuum that Picard encountered on his very first mission as captain of the starship Enterprise. In the years since, Q has returned to harass Picard and his crew. Sometimes dangerous, sometimes merely obnoxious, Q has always been mysterious and seemingly all-powerful.

But now, Trelane, another member of the continuum whom Captain Kirk and his crew first encountered over 100 years ago, has tapped in to an awesome power source that makes him more powerful than the combined might of the entire continuum. Q warns that, armed with this incredible power, Trelane has become unspeakably dangerous. Now Picard must get involved in an awesome struggle between superbeings. And this time, the stakes are not just Picard's ship, or the galaxy, or even the universe - this time the stakes are all of creation.

Having the whole recording

Has Star Trek, The Next Generation: Q-Squared (Adapted) turned you off from other books in this genre?

Not even, I love this book. In fact John de Lancie is one of the best readers of all time, but I want the whole recording.

No. I've heard the whole thing before, Its great.

What character would you cut from Star Trek, The Next Generation: Q-Squared (Adapted)?

None. The story and characters are great but its not all there.

Let me make this clear. I love this book. In fact its my favorite of the Star Trek books. But I would like the whole reading of the book. Its not that its been abriged too much, half of the recording is missing.

Would you try another book from Peter David and/or John de Lancie?

Why on earth is this abridged? I read the book years ago and loved how it interwove multiple storylines and aspects from both classic Trek and the Next Generation. When I saw John de Lancie narrating, I thought it would be fun to listen to the Audible performance. I didn't see the "Abridged" notation on the item, and only upon listening did I realize that there was a problem. The abridged version only tells a small fraction of the story, and the missing pieces are so great as to render the story line incomprehensible. There's no reason to abridge this either. The original book isn't very large, and there's certainly nothing controversial about the subject matter. I can't imagine what the impetus was. Maybe deLancie's fee was too high? But then why use him as the narrator?

Do yourself a favour and stay away.

There's abridged and then there's slaughtered!!!

I purchased this download thinking it was a download-version of the two-cassette abridged version released years ago. Too bad, this download consists of only the material from the second cassette.

Abridged is one thing, but only providing the second half of an already abridged story is quite another. The real tragedy of it is this work by Peter David is conceptually superior to most of the Star Trek:TNG Movies and all but the most exceptional Stark Trek: TNG episodes. Plus, John de Lancie's performance is brilliant!!

Audible and Simon & Schuster had the opportunity to provide a truly delicious story that's already in audio formant. Instead what's provided is the equivalent of a waiter bringing you someone else's half-eaten entree in the hope you will not notice.

I couldn't listen to this audiobook because the the sound quality was terrible (downloaded in format 4). I'll just have to buy the paperback.

YOU HAVE NO IDEA, HOW SCREWED UP THIS IS

I BELIEVE HE SAID HIS NAME WAS WOLF?
This is much to do with the multiverse. We have Captain Picard and First Officer Picard, Beverly Crusher and Beverly Howard. A humanoid Data and a Android Data. Worf, leader of the Klingons and Worf, head of security. Troi is married to Riker, with a child and she is not married to Riker. Tashi Yar is head of security and not. Etc...Guinan is involved and in a small part so is Sulu.

Fans of the original Star Trek will recognize Trelane, The Squire of Gothos. This was always one of my favorite episodes. Trelane is still very immature, but has developed a lot more power under the tutelage of Q. (although I thought all Q were called Q?) Q is sick of the kid and so is the crew of the Enterprise. Anyways the book is fast moving and has a great plot. I am not sure, but I think there was a small reference to an episode called Charlie.

I have read the unabridged version and yes it is better, but this is all that is recorded. If you can get over the abridgement then I believe you will enjoy it. One of the things I believe you do miss, is that in the unabridged you meet top flight nurse Geordi La Forge. I don't think that is included in the abridgement. Buy this, listen and maybe it will wet your appetite to find the book in a used book store or buy it on Amazon.

The production is very well done and John de Lancie is superb.

It does need to be noted this is an abridged version of the novel not the Adapted part in the title. This is essentially a digitization of an older recording. Personally I think Audible should be working to record all the trek novels they can with various voice actors to fill in the roles.

That said John de Lancie does a good job with the voice acting conveying emotion into the characters and conveyign the complicated esoteric concepts well. He has a good voice but he's able to vary it enough so the characters come across well. He does a good job. The book has a lot of sound effects and audio work cramming in sound effects that mimic the show. Often this works to make me think I am listening to an audio drama of the tv show. One of the effects, a static buzzing sound used for some transitions, was very distracting and off putting making me think my files were corrupted. I suspect this was from the original recording and I think it was a bad choice.

The story itself works well. Peter David remains a writer I love to read. He's good at turning intellectual property like Trek on its ears a bit playing with the established world. Taking up a nearly forgotten original series one episode villain and making him into a threat related to Q is interesting. I would have enjoyed more time establishing Trillain and Q's relationship and how they interact. I liked what I saw and would have enjoyed more establishment of why Trillain is a threat and how he is different from Q as essentially a child-like entity. Seeing Troi and Picard out strategize Trillain was thrilling. The concept of three vastly different Enterprises from different universes interacting was well done. This book does a nice job delving into Trek lore and building a story. I hated one of the subplots and a part of me wanted to see more of the universes interacting. The ending to this novel feels a bit rushed as well. However, I did enjoy the book and most of my complaints are that I wanted more. A good little novel that feels like a good Trek episode with a heavier ending.

Nice and short. Very enjoyable as a true fan of the Q universe. Good job

this is a book that you didn't want to put down, and was upset when the story ended this book is flat out outstanding!

John DeLancie is a fantastic actor as Q, and he did great as the reader of this story. The book itself is a little cheesy, as was some of the sound effects, but I enjoyed having Q's voice in my ears for 2 1/2 hours, lol.