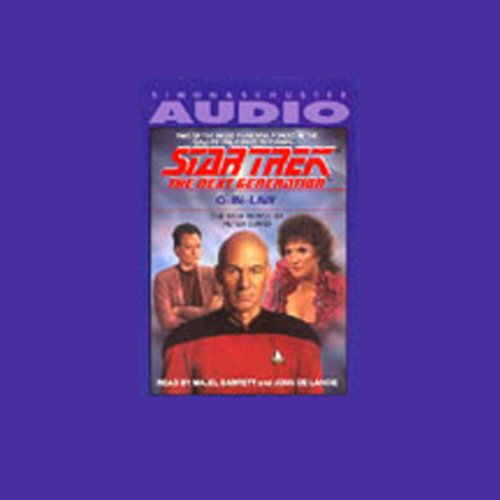 The U.S.S. Enterprise is chosen as the marriage site for a wedding that will unite two powerful rival families of the spacefaring merchant race, the Tizarin. But Captain Picard's happiness is soon cut short by the arrival of the Federation delegate from Betazed: Lwaxana Troi - the mother of the ship's counsellor, Deanna Troi. Despite Lwaxana's nagging presence, the festivities proceed smoothly until the arrival of the notorious and all-powerful being, Q - who has come to examine and challenge the human concept of love. Suddenly, the celebration is in turmoil, the Tizarin families are on the brink of war, and Lwaxana is determined to teach Q a lesson in love that he will never forget.

Well Performed, if Missing A Lot of the Story

I loved this book when I was younger, and I was delighted to find the audiobook. To have the narrators that it had was just icing on the cake, and they did a wonderful job performing each character. And I loved what was presented here, especially the hilarious end! But it was obvious that a lot of the story had been cut out, and that really sucked. It's the only reason I'm not giving 5 stars across the board.

The premise of this story is amusing, entertaining and will capture the imagination from start to finish. In this story, Q tangles with the formidible Mrs Troi and the trials and tribulations kept me laughing through the whole of the recording.

Mr DeLancy, having played Q in the series, does a fantastic job with all the sarcasm and wit the character deserves and Madjel is nothing short of wonderful!

What would have made Star Trek, The Next Generation: Q-in-Law (Adapted) better?

The abridgment of the book made this far too short and did the book a disservice. Having John de Lancie and Majel Barrett read the roles of all characters, as well as provide narration, was distracting. The music (intended, I assume, as dramatization of the story) was likewise distracting.

The abridgment of the book resulted in the ending being far too sudden. I have read the book, and felt the audiobook's abrupt ending made the story seem juvenile in its presentation. I felt bad for author Peter David.

Would you be willing to try another one of Majel Barrett and John de Lancie ’s performances?

I would be willing to try another of Majel Barrett and John de Lancie's "performances" only because the number of audiobook versions of Star Trek books are surprisingly few, given the large quantity of books written for the different incarnations of Star Trek.

What character would you cut from Star Trek, The Next Generation: Q-in-Law (Adapted)?

The characters in the audiobook were not a problem for me.

What made the experience of listening to Star Trek, The Next Generation the most enjoyable?

Always enjoyed the tape version until my tape died. Glad I found the Audible version for my library.

Laxwana Troi of course when she was ready to take the chain saw to Q!

Which character – as performed by Majel Barrett and John de Lancie – was your favorite?

One of My Faves

Almost 15 years ago I was obsessed with TNG and was browsing the novels and came across a book on tape called Q-in-Law the first thing that caught my eye was the cover there was Q and one Lwaxanna Troi and I thought, "now this ought to be GOOD!" I picked it up and never put it down!

When I saw the thing was narrated by John DaLance and Majel Barrett-Rodenbery (I don't think I spelled that right...) the actors that played Q and Lwaxanna Troi respecticvly. For fans of TNG you can't go wrong when 2 power house characters go head to head over subjects like love and the meaning of life....

Tempers flare and lovers are spurned!! Don't miss two of TNGs most popular reoccuring characters battle it out head to head... can you guess who comes out on top???

Two of my favorite characters

Majel Barrett and John de Lancie in one production? What a treat!
This isn’t a best-of-the-best plot. It’s pretty standard (but enjoyable) fare. What makes it really delightful is the narration. Both voice actors do a superb job, and the writing is really good at capturing the characters. if you want a fun story of Q being an imp and getting some of what he has coming to him, well, look no further!

One of my favorite Trek Stories

What did you love best about Star Trek, The Next Generation?

I loved the show and the actors who portrayed the wonderful characters of Next Gen.

In this story, written by Peter David, I laughed and enjoyed the book the first time I 'READ" the story. Then I heard it was made into an audio with Majel Barrett and John de Lancie reading. I had to get it. And the story rocked... but

What does Majel Barrett and John de Lancie bring to the story that you wouldn’t experience if you just read the book?

What can I say, I loved them on the show and as readers they brought the fun and authenticity to the story. I felt like I could close my eyes and see the story unfold as if it was actually on the screen and not just an audio book.

Actually that is just what I did. I listen to audios while I work. Scanning files is pretty much boring. So this keeps me going. The better the audio book, the more I get done. With this book I sat and listened and worked the full length and was surprised it was over so soon.

Why oh why did they have to Abridge this book? It's not that long a story to start with. Someone get the story put out in a full version. Please???

I love Peter David... This book has a great sense of humor and excellent story plot. I highly recommend this book to all star trek fans that love Q and Luxanna troy.

background sound is too much

I love de Lancie, and I love Majel, but there's a ton of background sound and music that make it really hard to hear what's being said. I really wish there was another version where the background noise was turned down a lot more so I could hear the story better. I'm not sure I'm going to be able to finish the audio book because of it-- I'm probably just going to buy a hardcopy instead.

Great to listen to John De lance and Majel Barrett. Not sure if the writer got Picards character right but still worth listening to.

Q and Lwaxana: What's Not to Love?