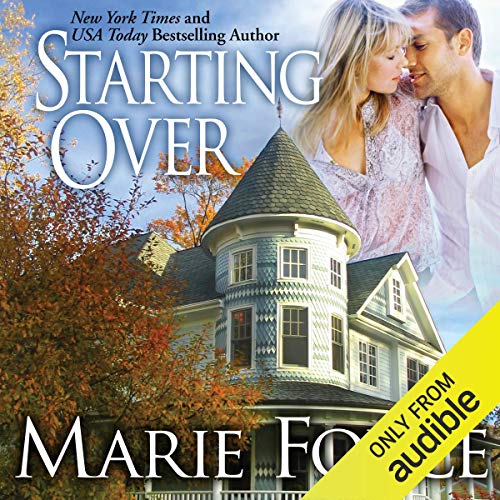 In a drunken stupor, Brandon O'Malley frightens his brother Aidan's girlfriend, enraging his brother and the rest of his family. Aidan offers Brandon the choice of rehab or jail, and Brandon reluctantly enters treatment. While in rehab, he confronts the lifetime of secrets and resentments that fueled his spiral into alcoholism, and these revelations have a major effect on his entire family. When he returns home expecting to resume his supervisory role in the family's construction business, Brandon learns his father has retired and put his younger brother, Colin, in charge.

Brandon is unhappy to be given the job of renovating an apartment building where he loses his heart to an adorable five-year-old tenant named Mike. After he falls hard for Michaela, Brandon becomes involved with her mother, Daphne, who is running from a past that will later test his sobriety and his mettle as a man.

I started this story and was a little surprised and disappointed with the way the story had turned to new characters. Let me say after the first chapter I was so hooked on Brandon and his story and then Colin. I LOVE this arm of the story and will never again be so quick to judge. Thank you again Marie Force for a truly amazing and loving story. One more book to go I am a little afraid to start it as I know it is the last and I truly don't want to let go of anyone in these books.

The best ever so many happy tears!
I love this series. So intense.
But I am so delighted the series is complete so I can go on to the next book immediately!!!

Great ending to this series!!!

Brandon's story is so heartfelt that I had a hard time putting this one down. I really felt all the emotions that he went through with "Starting Over". I also enjoyed that this story included all the O'Malley clan and their lives.

Narration was great as always. Sorry to see the series end, but I will look for more books from this author.

So worth reading again.

Over the last week I have been binge reading - well actually listening to - the four Treading Waters books by Marie Force. With book 5 coming out in April I was losing time to reread them in preparation of the final book. I think this is the third final book in this series showing you how popular and great they are. I know, I read these books before but it must have been a long time ago because even though I remembered bits and pieces I was totally engrossed in the stories of characters. I can’t tell you how many times I laughed and cried this week while revisiting them. You can’t go wrong with a Marie Force book how about reading the books that started this author’s career- one where her readings are always asking her to add another book so they can see what’s happening with characters they love as if part of the family.

I absolutely loved this book, as well as every other book in this series, so understandably, I was excited to get to listen to this as well! Similar to the second book in this series (Marking Time), there are some quality issues with background noise. It wasn't as obvious or consistent with this book as with book 2, but there is some, mainly at the beginning I noticed it.

Holly Fielding has done a wonderful job of narrating the characters that Marie Force wrote. I'm generally not a big fan of third-person narration, but Ms. Fielding did it well!

I will be listening to the final book after this!

Starting Over is book 3 in Marie Force's Treading Water Series. It focuses on Brandon O'Malley. It is a powerfully written book that elicits many emotions. I love that even though people make mistakes, their lives are not over.

Brandon O'Malley has spent the better part of the last 10 years in the bottom part of a bottle. He hits rock bottom when he makes unwanted advances on his brother's girlfriend Claire. This forces his life in a new direction. This incredible story is how he puts his life back together. It is filled with hope, fear, love and happiness. There are twists and turns that kept me burning through the pages. Marie has a way of making you fall completely in love with her characters. I laughed, I cried and I felt every emotion imaginable.

PS - Holly Fielding is amazing at performing this story for the audio version. Her talents combined with Marie's story makes for an incredible experience.

The commitment to a new life and !he belief in something greater then self. True love prevailing.

these books knocked me to tears

If you could sum up Starting Over in three words, what would they be?

no matter what we r still family

hope there will be more to this collection

The best so far. I loved the ending.....no spoiler here. When a book makes me cry I know it really is a great read.