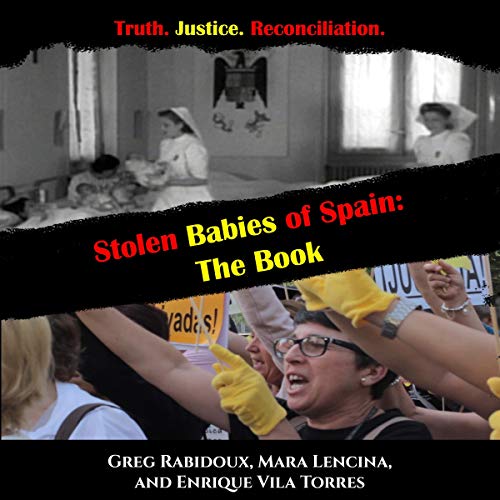 Stolen Babies of Spain: The Book

Stolen Babies of Spain chronicles how and why baby-stealing began in Spain just after the civil war of 1936 - 1939. This heartbreaking and tragic history of the worst, modern-day network of stolen babies pulls back a web of deceit and terror, uncovering pain, suffering, and, worse, organization and profit.

Using more than 300 interviews conducted by the authors, many of them exclusive, Greg Rabidoux and Mara Lencina reveal the personal stories of the adults who were stolen babies as they search for their biological parents and their true origins. The authors also shine a spotlight on the surviving parents who still to this day search for their babies that were stolen and sent away for illegal adoptions.

In Stolen Babies of Spain: The Book, the authors also expose the role of the Catholic Church, General Francisco Franco and the Spanish government, and medical doctors and nurses such as the infamous Dr. Eduardo Vela, in operating in a criminal network for decades that stole babies and sold them for profit, both in Spain and worldwide.

Rabidoux, Lencina, and Vila take an in-depth look at the ongoing stealing and trafficking of babies and children worldwide and what, if anything, is being done to combat these basic human rights violations and crimes.

Fortunately, the work Rabidoux and Lencina did in finding families and those who had been stolen to interview also revealed heart-warming stories of the rare yet wonderful moments when stolen babies and their family are reunited. In conjunction with the award-winning documentary film Stolen Babies of Spain, also from Rabidoux and Lencina, this fascinating and tragic hidden history is now, finally, revealed.