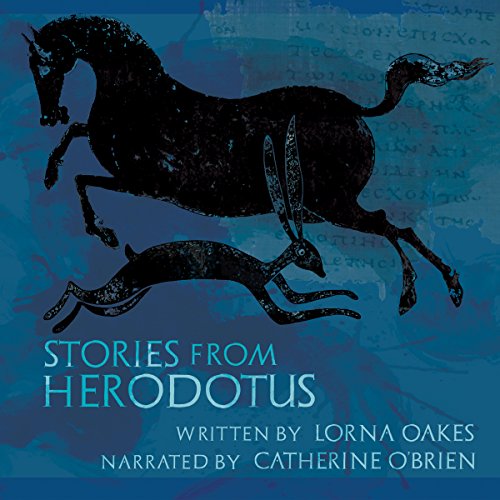 Herodotus wrote the first history book in the world. That is why he is sometimes called the "Father of History". He lived about 2500 years ago in the fifth century BC. He was born at a place called Halicarnassus in Asia Minor. The modern names for these places are Bodrum in Turkey. Herodotus was a keen traveler who went all over the ancient world and was interested in everything he saw and heard.

If you’ve ever tried to read Herodotus, then you know that most translations have a lot of repetition and ramble on a bit. Now Lorna Oakes gives us some great stories from Herodotus distilled down into thoughtful, sometimes action-packed, stories that will delight adults and entertain kids.

The book starts off with a little bit about Herodotus. He traveled extensively during his lifetime and wrote down historical events as best he could. Many of the events he wrote about happened generations before his time, so there’s bound to be some inaccuracies. Yet there’s a charm to his works as well. He made a grand attempt at recording the known world’s history and that account has survived to this day. All around, that is extraordinary. I, myself, have only read a bit of Herodotus but Oakes’s book makes it easy to absorb the essence of the tales Herodotus was trying to capture.

There’s 4 parts to this book. Part I is all about King Croesus in Lydia, which is in modern-day Turkey. He has a portentous dream and is concerned about his reign. I really like how he tested the various oracles. Very clever! Yet he then relies on the foretelling of the Delphi Oracle, misinterpreting the true meaning. Oakes does a great job here of just telling this tale, showing us how arrogance can color the meaning to any oracle riddle. It provides a great discussion point for adults and kids alike.

Part II is the Story of Cyrus. Part I flowed into Part II as both Cyrus and King Croesus are both influenced by the Delphi Oracle. This tale tells us how Cyrus came into power. It’s significant because Cyrus united two major families and became a significant Persian ruler. Cyrus was slated for death as a babe but he was saved by a cowherder and his wife. Later, of course, this is discovered and a reckoning must come out of it. I love that Oakes doesn’t leave out a rather bit of gruesome in this story. She doesn’t linger over it either and I feel it was essential to show motivation for one of the character’s vengeance.

Part III is about Herodotus’s time in Egypt. Of course, he visits the great pyramids and writes about how they were constructed. Herodotus gives us his version of how Psammeticus became king of the 26th dynasty of Egypt. This sections also includes the tale of King Apries and how he was overthrown by General Amasis and rebel forces. For me, it was the bits about the Great Pyramids that stood out most in this section.

Part IV is all about the Greeks and Persians. There’s some famous stories in this section, including the tale of Leonidas and how he and his small force repelled Xerxes’s army. This is a captivating story and the retelling of it here is well done. This section also includes the esteemed Greek physician Democedes. He was taken captive and bounced around a bit, sometimes as tribute. He ties Polycrates of Samos to the Persian king Darius.

All around, it’s a great collection of ancient tales based on Herodotus’s works. I love that Oakes has made these tales so accessible and I think this is a great way to introduce kids to ancient history.

I received a free copy of this book via Audiobook Boom!

The Narration: Catherine O’Brien did a great job with this book. There are several people and place names I had not heard pronounced before, so I can’t speak to the accuracy, but I can say she was consistent in her pronunciations all the way through. She was also great with portraying the emotions of the various characters. She sounded engaged and interested in the work all the way through.

What made the experience of listening to Stories from Herodotus the most enjoyable?

Learning how to pronounce the names and places properly.

Learning how the people relied on dreams and signs to rule their lives.

Have you listened to any of Catherine O'Brien’s other performances before? How does this one compare?

No. She has a very captivating voice lulling you throughout the book.

It was interesting to learn of ancient life and times.

"I was given this free review copy audiobook at my request and have voluntarily left this review”.

For every fan of American gods

If you are a fan of American gods this is a must read. Shadow was big on the writings of Herodotus. Read this and find out why. Great read and a great companion to the Neil Gaimen story. I was voluntarily provided this free review copy audiobook by the author, narrator, or publisher.

Mythology at it's Finest

This was a very interesting book. It was a combobulation of short stories based around mythology. One of the things that made the book unique was the music. Generally, I find that music detracts from the story and it's not good. However, in this instance, the music was placed in between the stories and gave the listener a brief moment to digest the story that just occurred. It also kept the story flowing from one to the next.

I really enjoyed Catherine O'Brien's style of presentation. Her diction was clear, her presentation was interesting. She did a nice job.

Just Goes to show that people are people no matter how long ago. They rarely listen to good advice and are pig headed when it comes to bad "This book was given to me for free at my request and I provided this voluntary review."