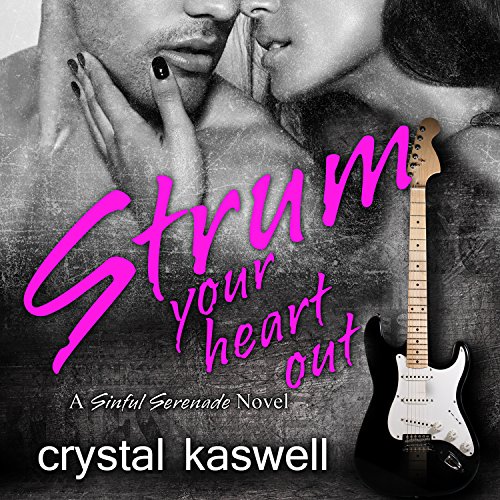 Strum Your Heart Out

College senior Kara Kendrick is not about to let lust ruin a good friendship. Yes, her rock star guitarist best friend Drew Denton is stubborn, guarded, and quick to threaten violence on anyone who hurts her. He's also trustworthy, protective, and several degrees hotter than the sun.

When Kara gets kicked out of her apartment, Drew insists she move in with him. But her crush isn't quite so manageable with him sweating through his push-ups. Or stepping out of the shower clad in only a towel. Or tackling her on the bed, tickling her to make her confess. There's no way they can be together. Not if she wants to keep her secrets. No matter how much her body begs her to throw herself on his bed, no matter how desperately she wants to rip off his V-neck and rake her hands over his defined torso, Kara is staying just friends with Drew.

Until she's not. Until they're kissing and touching and about to do something that will change their friendship forever.

I couldn't even finish it I felt like it was the same thing over and over again. She is self conscious and he tries to seduce her but no she's too scared. There were a few good parts but it definitely wasn't a page turner.

Better than the first book.

This was a friends to lovers story, which are one of my favorite kind, and is told from Kara's POV. Kara and Drew have been friends for a long time, well before Drew became famous, so to Drew Kara is his best friend because she is truly genuine.

It is the second book in the Sinful Serenade series, but you don't have to read or listen to the first book to be able to know what's going on.

Kara's roommate ends up telling her that her boyfriend is moving in and she has 5 days to get out. Drew is already looking for a new place and so he insists that she move in with him. She is reluctant because she knows that she has this huge crush on him and sharing a living space is only going to make matters worse. But she does move in with him and for the listener it's great. One of my favorite scenes was the one with the cake batter.... And once things heat up, they are hot.

Kara has some issues that she has to deal with in the book and I thought Drew did a wonderful job of drawing her out and helping her to deal with them. He also helped her to stand up and go after the things that she's passionate about. He's this rockstar, but he's her personal cheerleader.

The narrator Tatiana Sokolov did a good job, and I enjoyed listening to her.

Worth it? I certainly thought so.

Way better then the first one!

The story was cute

This was such a cute story a about two lovely people trying to find their way. There were a few times I though ugh she is such a girl but otherwise it was really sweet.

Much better than the first

I thought the first was okay. Good, but normal. This one had me binge listening. The only annoying part was the couple from the last book being so cheesy, but since I'm pretty sure that was intentional by the author- get over it and listen to this book. Can't wait for the third and fourth to come to audiobook! Thank you!