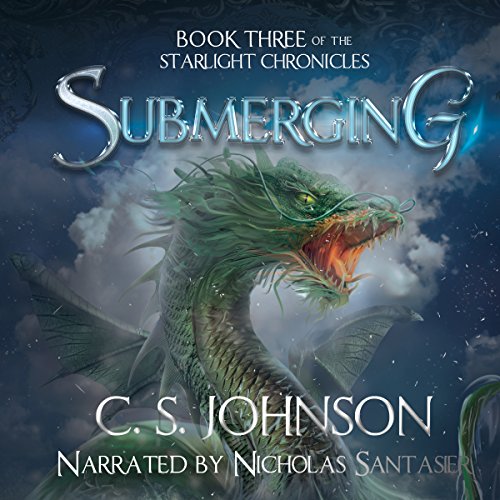 There is nothing like a birthday to give Hamilton Dinger something to look forward to in his busy life. With his new job as a part-time intern at the Mayor's office, being a full-time high school student and Starlight Warrior has its challenges. And although he has the full support of his girlfriend, Gwen, and his best friend, Mikey, and even a tentative partnership with Starry Knight, his ally against the Seven Deadly Sinisters, he has definite cause for concern. The arrival of SWORD, the growing demonic activity in Apollo City, and the increasingly negative media attention has sparked ongoing unrest among the city and its inhabitants.

But Hamilton has some additional help in Aletheia, a new supernatural ally, who has come to equip Hamilton for his calling to be a Starlight defender. With the help of the crew of the Meallán and its captain, St. Brendan the Navigator, and Aletheia's sister, the Star of Time, Elysian and Hamilton set off for the Celestial Kingdom to deepen his commitment through learning, new landscapes, and cosmic surfing.

As evil forces continue in their quest for power and control, Hamilton finds uncertainty and distrust between his two worlds. Can he find the answers that will help him? Will he find the strength he needs to carry on? Will Wingdinger realize the importance of his choices, and, more importantly, will he make the right ones?

SUBMERGING BOOK 3 IN THE STARLIGHT CHRONICLES

SUBMERGE AND JOIN THE ADVENTURE UNDER WATER! MAYHAP YOU WILL FIND SOME SEA MONSTERS! AND OTHER CREATURES!

I do not care for the narrator, but like the serie

I received a copy of Submerging in exchange for my honest review.

Submerging is the third book in the Starlight Chronicles by C.S. Johnson. This is the story where Dinger a lot of his memories back and is able to see who he was before he fell, and find out why he fell. There is still a lot of mystery around Starry Knight. I still try to sort out who it might be, though I have some suspicions.

I did enjoy this story, and I am growing more fond of Dinger in all of his assholiness, however, I still have some concerns about him. In general, the series has been good, and Dinger’s personality (though annoying) is essential. As the reader continues through the story, the reasons for his personality start making more sense. If I can be honest, I wish his parents knew he was. It also sucks that he has to literally drop everything (leave a date, leave class, not show up for practice) whenever anything happens and calls him to battle.

This story has many underlying religious elements. Normally I wouldn’t complain so much, but I felt it was too overdone. I am hoping it is not so much in the other stories in my continuation through the series. I am not religious, however, I have read many Christian Fiction books and they are okay and do not overdo certain concepts. Here, it felt like everything was thrown at the reader, and it felt constant, and it was exhausting. (For the record, I respect other people’s beliefs). The first two books, the religious elements were hidden between the lines, which made it more enjoyable.

As with Calling, the narrator is meh. The audio editing is bad. When he makes mistakes, there are silent pauses and you can here him say “oh” and he rereads the section again like he lost where he was. He again did this several times. I usually do not condone the changing of narrators in series, but, I would stand behind a change in this narrator 10000000000%.

I look forward to the ultimate finale of the series. I have a hard time not knowing what is going to happen. With the rate things are going, it is hard as the reader to believe it will end, and the town will have a reprieve. It feels like the town may have to have Wingdinger and Starry Knight to protect them for the rest of eternity at this point. There is a lot of action and there are hardly any points in which the story feels slow.

Great addition to the superhero story!

Submerging (The Starlight Chronicles #3) by C.S. Johnson and narrated by Nicholas Santasier is an audible book I requested and the review is voluntary. This is the third book I have read/listened to and I have enjoyed each one. Hamilton, the narrow minded, self-centered superhero has made some progress in growing up in this book. It has been slow but the wheels are spinning up there. In this book, more evil and more good supers are introduced along with other problems for Ham. It is a fun, coming of age (and self) of a superhero. A wonderful book for teens. It is full of fun, emotions teens deal with, the super genre, coming of age, dating, and deeper emotions too. The narrator is the same and the first book I thought it should be another voice, second book he was better. Now I think I am just used to hearing him!