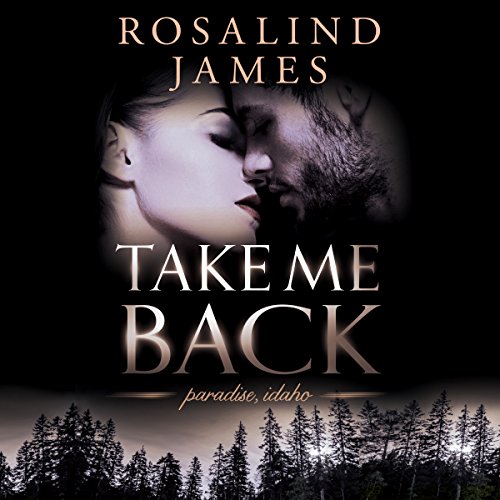 Hallie Cavanaugh's late father just left her millions of reasons to stay away from Jim Lawson, deputy sheriff of Paradise, Idaho, and the man who broke her heart fourteen years ago. Hallie has worked hard for independence, but she can't dismiss a massive inheritance, even if she has to follow her father's manipulative terms to get it. How hard can it be to spend six months back in Paradise - and not sleep with her old flame?

Former Army Ranger Jim just wants to do his job, raise his daughter...and resist the gorgeous, redheaded reminder of his bad-boy past. Their one unforgettably hot night together had major consequences, and now there's a fortune and a family legacy at stake. But when Hallie is threatened amid a storm of uncovered secrets and conflicted loyalties, protecting her becomes more than a duty: it's a deeply personal fight Jim's heart won't let him lose.

Another Good Installment To The Series

This book starts with a murder, committed by an unnamed person, of a loathsome human being. A man with money and power, who bullies everyone around him. No one in the small Idaho town is sad to see him die, including local sheriff Jim Lawson and the man's estranged daughter Hallie Cavanaugh. It is this murder, and its aftermath, that take center stage in this fourth book of Rosalind James' "Paradise Idaho" romantic suspense series.

Although the previous books in this series seemed to focus more on the romance, this one falls much more firmly on the suspense side, and I think it's better for it. The story kept me guessing, right up until the very end, on who the murderer was. I thought I knew, then I changed my mind, then I changed my mind AGAIN, then I was wrong anyway. The mystery was a good one, and the action built up from small acts to deter Hallie from staying in town to fulfill the (unfair and frankly bonkers) terms of her father's will, to the killer's truly sinister intentions. I kept reading because I wanted to know who did it, and what they would do next, and I fell for just about every red herring sent my way.

The mystery was compelling, but Jim and Hallie's romance was also a draw. They had a brief, tragic fling in high school, and hadn't seen each other in years. Jim is a widower with a young daughter, and Hallie has perfected the art of running away. Their relationship wasn't easy, or full of the usual lighthearted flirting and banter in a typical romance novel, but it was sincere and engaging.

Overall, I really liked this book, it was well-written, well executed, and compelling all the way through.

This book can be a stand alone listen.

Brittany Pressley was good with the narration of the story, however, I think the dual narration in the first two books was superb.

Way To Keep It All In The Family

I love that now Deputy Jim gets his chance at love and we find out his back story and how he ended up a cop in his hometown. Deputy Jim may have always been a good guy but he has always been on the right side of the law? It's very interesting to see what happens when Jim's first love comes back to town and stirs up all kinds of conflicts in his family dynamics. And as usual in this series, Rosalind James writes stories with a mysterious and/or intriguing subplot and this one is no different. For such a small town, Paradise has a whole lot of criminal intent. The best part of the story is how Jim and Hallie overcome the obstacles, including family complications, to their relationship,

The narration was okay but would have been better with the duet style narration of the first two books in the series. Brittany seemed to narrate with a bit of a southern drawl that didn't make sense.

Absolutely worth price. I would pay it all over again.

This is one of James' best books to day. It's such a unique and clever story, with the addition of strong, yet flawed characters and a mystery that i actually couldn't solve until the very end.

I was really surprised i couldn't solve the mystery as fast as i normally do with books. about halfway through i can figure out who the killer is but this one really threw me for a loop. i was so happy when this finally happened because it breaks the monotony of predictable books.

also, this is the first time i've ever heard brittany pressely. she was really fantastic and she really added an extra bit of depth to each character. i thought that jim and anthea had really deep voices (almost too deep) but i realized that it was just a perfect choice. i mean, they're twins, and all women don't have to have squeaky, high-pitched voices.

i just thought this was a really fantastic book that broke away from the "typical" suspenseful romance. if you are a fan of Rosalind James or the genre, this a great book to read, and you don't even have to read it in the order the books were written.


I received a copy of this book in exchange for an honest review. the view expressed here is my own and i was not obligated to give a positive review.

This book kept me on my toes throughout. I was so wrong so many times as to the killer. Loved Mac and Anthea. Great love story and mystery. Thanks again RJ.

Great addition to the series

This book didn't hold my attention as well as the previous books in this series but it really picked up toward the end and finished with a bang! Rosalind James is still one of my favorite authors!

Oh my god I loved it!

If you could sum up Take Me Back in three words, what would they be?

What was one of the most memorable moments of Take Me Back?

Where to start, it was awesome. Hallie and Jim are reunited when her dad dies and Hallie returns to hear the will being read. She is shocked to hear what the will says and see's Jim again for the first time in 14 years. They have a history and a lot of misconceptions to work through. I loved the mystery and romance of this story. Don't want too give anything away, but the ending was better than I could have imagined. A must read!

What does Brittany Pressley bring to the story that you wouldn’t experience if you just read the book?

I tend to read books quickly and Brittany Pressley does a great job of slowing me down and letting me really experience this book. I got more out of it by listening to it than by reading it.

take me back; don't tell

An amazing book and I highly recommend this book. It has a great mystery that kept me guessing throughout the entire book. The romantic story is also a fun story.

Jump right in and be entertained

Jump right in and be entertained by a romantic suspense story that is delivered superbly by Brittany Presley. The voices, accents, and pace she uses makes me feel like a witness at the event rather than just hearing a book be read to me. Don’t worry if you haven’t heard (or read) the previous books in the series before… you’ll most certainly want to afterward and in the meantime, this one stands solidly on its own.
I enjoyed the suspense that Rosalind James created, she provided a nice pool of characters as possible villains and did a good job of not letting the “who done it” be a forgone conclusion. The romance was tender and creative (who wouldn’t want to play a game of pool with Jim?!?) with a compelling combination of protectiveness and supportiveness. Add in the way Jim relates to his daughter Mac and he’s irresistible. Hallie as heroine is no slouch, she’s taken the hand that life dealt her and moved on, making the most of it displaying strength and sensitivity to those around her.
When I read this book for the first time there was a moment or two where the author seemed to apologize for her characters’ choices / thoughts / opinion which created a hiccough in the flow of the story for me personally. However, when listening to the audio those moments were not nearly as distracting and actually compelled me to go back and read the whole book again. I actually liked it better then, catching a conversation or two and absorbing several scenes that somehow hadn’t quite connected with me the first time around.
Jim and Hallie were separated as teens through manipulation and misunderstanding. They both evidently had tremendous capabilities for forgiveness because after years (14!) of believing ill of each other, one conversation cleared the air. Perhaps I’m just jealous, I’ve never personally experienced a relationship/encounter where chemistry outweighs common sense and because I tend to belabor things and need more time to “process” :/
I can’t end this review without mentioning that once again, this author wrote a secondary character who stole my heart. Mac is a delightful combination of bright, plucky, respectful (not quite always), snarky, responsible, sensitive, NOT-perfect tween. And everyone could use a best friend like Anthea!

I so enjoyed this audiobook - it's got great characters, a complex storyline, and the narration adds depth beyond the Kindle version. There is so much more than you'd expect from stereotypical "romantic suspense" - family situations both good and bad, love & grace, and all the nuances of living in a small town called Paradise. This narrator reveals it all with ease and overall does a fine job presenting this story.

My Kindle review covers the rest: When the town tycoon dies, too true to real life, the squabbling over the inheritance starts and a few family secrets come to light. Author Rosalind James masterfully spins this story of interwoven family relationships and lifelong friends, while also giving us readers a sweet rekindled romance and bad guy, of course. And she will keep you guessing until the end - you won't be able to put it down! (Ed: or stop listening!)

Although part of a series, this book stands alone and I highly recommend it if you're looking for a nice read. And then you'll want to pick up the rest of the Paradise books. And then maybe "Escape to New Zealand"! But this one is a keeper, for sure.

I received a free copy of this audiobook in exchange for an honest review - this opinion is my own.

My favorite of this series!!

I love love LOVE the characters in this book. Being a teacher myself, I am critical of teacher characters. However, Rosalind always seems to get what being a teacher is. Hallie is strong and funny, and I really enjoyed her pluck. Jim is just sexy. Sexy single dad. How can you not fall in love? Overall, these stories have more suspense than what I normally read, but they are by no means dorky. I also enjoyed the narrator very well. She really was able to portray the emotion between the couple. And the end will make you cry, so make sure you aren't driving. :)

Another great book by Rosalind!

I like the way that Rosalind develops her characters and their relationships between them. She does a great job with bringing in outside characters, linking story to story.