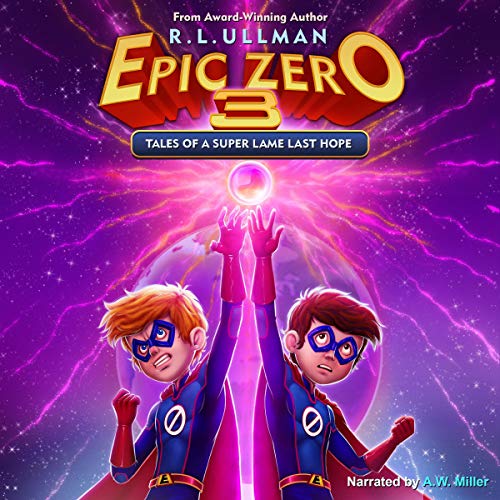 Over 700 five-star series reviews on Amazon and Goodreads.

Elliott Harkness is finally legit. He's learned the superhero ropes and even saved the world a few times. But when Elliott makes a major mistake during a do-or-die mission, his confidence is shattered and he decides to hang up his tights...for good!

Unfortunately, a new threat forces Elliott to put his early retirement plans on hold. A cosmic creep called The Herald is heading for Earth, and bringing Ravager, the Annihilator of Worlds, with him! To stop the planet-eating monster, Elliott needs the Orb of Oblivion. There's just one problem - it no longer exists! Desperate for another Orb, Elliott realizes he must somehow travel to a mirror universe to find one. And that's the least of his troubles! The multiverse is collapsing, and only one universe will survive!

With the end of everything approaching, will Elliott become the epic hero he's always wanted to be - or will he always be just an Epic Zero?

This is the third audiobook in the hilarious, action-packed series that will entertain kids, middle school students, and adults.