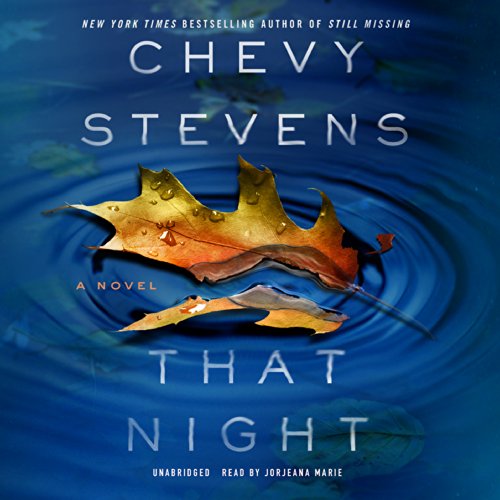 A stunning breakout novel from the New York Times bestselling author of Still Missing in which a woman is convicted of her sister's murder.

Toni Murphy was eighteen when she and her boyfriend, Ryan, were wrongly convicted of the murder of her younger sister. Now she is thirty-four and back in her hometown, working every day to forge and adjust to a new life on the outside. She's doing everything in her power to avoid violating her parole and going back to prison. But nothing is making that easy – not Ryan, who is convinced he can figure out the truth; not her mother, who clearly doubts Toni's innocence; and certainly not the group of women who made Toni's life miserable in high school and who may have darker secrets than anyone realizes. Before Toni can truly move on, she must risk everything to find out the truth and clear her name.

Didn't Care For the Narrator

I love Chevy Stevens, but this narrator really isn't the best choice. She has a very nasal quality and sounds like she might have a cold. She also has some... regional pronunciations, I think? Or it's a speech impediment. She says words like "shoulder" as "showder" and "told" like "tode." I found that to be very distracting.

Couldn't put it down.

I listened to or read all of Chevy Stevens' books so far and found this as good or better than the others. It kept my attention 100% of the time and I couldn't wait to listen to it. I also found the narration excellent. I can't wait for the next one. I loved the character growth and what I learned about life in prison and what parole exactly is. The romantic side of the novel was wonderful as well. I am sorry I finished it!

Loved the heroine, the suspense, and the setting. The family dynamics were particularly interesting to me.

I like what they already came up with:"They said she was a murderer. They said she killed her sister. But they lied."

I couldn't get into "Still Missing," but I devoured "That Night". Stevens has mastered the art of torturing her darlings. Here she did so in a way that I was able to endure it and maintain hope for Toni. I'm very picky about narrators, but I loved this one. I think she had a bit of a cold, but it didn't bother me as it seemed to other reviewers.

Chevy Stevens is a great story teller and I've enjoyed this as well as the other 4 books that are available on audible at the moment. A well paced story and kept me engaged.

Love the book. But, the narration is distracting.

I jumped to download the audio version of That Night. I don't have much time for reading over the next few weeks but plenty of time commuting, so win win.

I'm a little over half way through and love this book. It's all I was hoping for.

But, the narration is distracting. The first couple of hours I couldn't get past how nasal-y her voice is. But, sure enough after a couple of hours that completely dissipated and doesn't bother me a bit at this point.

The thing I cannot get past is that she cannot pronounce certain words properly and it pulls me out of the story every time she says: going, growing, shoulder and older and certain other less frequently used words that aren't coming immediately to mind.

Older sounds a lot like odor and shoulder sounds like show-der. She doesn't seem to have problems pronouncing her L's in other words so I'm not sure if it's an accent or where this is coming from. Unfortunately, she uses older and shoulder a lot so it's been pulling me out of the story a lot. Making me roll my eyes because I have to regain focus.

Anyway, happy to have a great listen on the way to and from work for the week.

This might be my first book from this author but definitely not my last. This book was so so good! It was told in alternating time frames and sometimes that can be confusing, but absolutely not in this book. The characters were Amazing, the story flowed really well. Even my husband said this might be one of the best books you have gotten in a while!!

The narrator had an awful nasal sounding voice that was almost enough to make me quit listening.

I was excited for this book, but felt it was very slow with too much boring detail. I didn't really get into the story until about chapter 16.

Chevy does it again - enjoyable read

Chevy Stevens is one of the authors I always turn to for a contemporary mystery read. She didn't disappoint on this one either. Another good story, although a bit predictable, still enjoyable.

Narrator sounds like she is wearing a nose plug

What was most disappointing about Chevy Stevens’s story?

This might be a great book, but I will probably never be able to force myself to finish listening to it. Why? I could barely focus on the story because the narrator sounds like she is wearing a nose plug. I don't know if it was that is how her voice really sounds or if the recording equipment somehow distorted her voice.

Narrator has a very Stuffy Nose. She sounds like she has cotton packed in her sinuses.