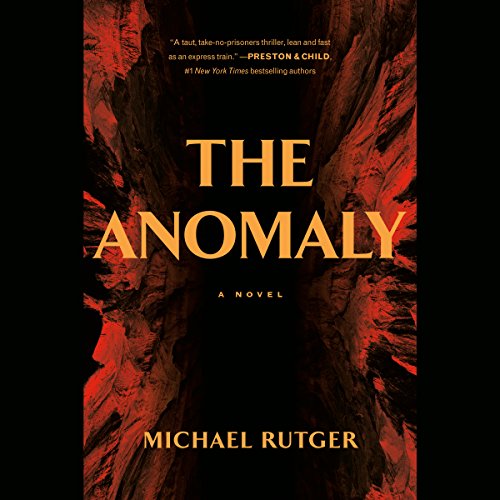 Not all secrets are meant to be found.

If Indiana Jones lived in the X-Files era, he might bear at least a passing resemblance to Nolan Moore - a rogue archaeologist hosting a documentary series derisively dismissed by the "real" experts, but beloved by conspiracy theorists.

Nolan sets out to retrace the steps of an explorer from 1909 who claimed to have discovered a mysterious cavern high up in the ancient rock of the Grand Canyon. And, for once, he may have actually found what he seeks. Then the trip takes a nasty turn, and the cave begins turning against them in mysterious ways.

Nolan's story becomes one of survival against seemingly impossible odds. The only way out is to answer a series of intriguing questions: What is this strange cave? How has it remained hidden for so long? And what secret does it conceal that made its last visitors attempt to seal it forever?

"A taut, take-no-prisoners thriller, lean and fast as an express train. Make no mistake: The Anomaly is the real deal." (Douglas Preston & Lincoln Child, number one New York Times best-selling authors of the Pendergast series)

"The Anomaly crackles with claustrophobic tension that had me holding my breath. I couldn't sleep until I'd finished reading, and then I couldn't sleep just thinking about it. I loved it. Michael Rutger is here to stay." (Sarah Pinborough, New York Times best-selling author of Behind Her Eyes)

"This is my kind of book. The suspense mounts slowly... slowly... Then the horror lingers for a long, long time." (R. L. Stine, New York Times best-selling author of the Goosebumps and Fear Street series)

Loved the story. Great new take on world creation / destruction myths and binds a lot of mysterious findings all over the earth together. Narrator was pitch perfect for the first person protagonist (a little off with the Brit accent) and overall great. Would gladly read more from this author and hear more from this narrator.

This has nothing to do with the fact that we are practically at the halfway point of the year or anything like that. I just finished this novel and can confidently say that it will be nearly impossible to beat the eloquence, fear-inducing, and brilliance of Michael Rutger's 'The Anomaly.'

The book is about a small youtube-type channel that makes an effort to discover strange and semi-impossible things to find. Basically, why the book is called 'The Anomaly' and why the name of their show is 'The Anomaly Files.' The book is in first person and follows Nolan, a California born-and raised man who is basically a failed screenwriter. After a failed attempt he created this gig with his buddy, Ken, and they go and research these things, asking the audience to not only look for the facts, but keep asking the questions. After getting picked up as one of the recipients of a sponsorship from an organization, they find themselves on their way to the Grand Canyon to find a mysterious cave discovered by an early explorer. After many failed attempts to locate the cave, they find it and then begins the life-changing events of being inside... Kincaid's Cave.

I can't even describe what this book did for me. I've seen movies that have made me claustrophobic from the shots and the music and everything else; however, I've never felt that from a book--until now. Michael Rutger wrote a story that not only made the future of certain individuals suspect, but shown a light on how different the world would be if certain things about how the creation came about would be if altered. I can't even fathom how smart this book was. Seriously, I think this guy--Mr. Rutger--you have to be one of my favorite talents to come out of 2018. There is always a chance that you've written a book before (maybe even a screenplay?), but I couldn't find anything but this one. If this is your debut, it is one hell of a ride!

As far as the book goes on my grading scale, I give it a solid A. Brandon Williams, the narrator, will get an A- from me and that is not a bad score. In fact, a C isn't a bad score, but I will say that his narration was great, but didn't necessarily go above and beyond for me.

So, read this book, listen to it... JUST FIND SOME WAY TO GET IT INTO YOUR HEAD!!!

This book has a completely ridiculous plot with 2 dimensional sociopathic bad guys that explain their whole plan for 15 minutes while they could just be killing the protagonists, but instead giving them just enough time to find a way out of said sticky situation. It basically reads like a scooby doo cartoon. But the thing is, I like scooby doo. And dumb bad guys. And cliched plots. So, pretty good all around.

About half way through I wanted the monsters to eat the author and narrator and save me from this adolescent and idiotic mess. Cliche? Ok, sure, here is a case study in every hack idea imaginable: they are trapped in a dark cave with monsters; they are being attacked one-by-one; the protagonist makes wise-cracks despite the gloom; every character does really really stupid things like going down dark corridors alone; and the plot is ridiculous, like a bad dream that someone at work wants to explain to you, and all you want to do is get back to your computer because email is more interesting. Oh how did I make the mistake of purchasing this audiobook? By reading the remarkably positive reviews it received. How? Why? Whom? This is a lesson in researching a book before it is purchased: pay close attention to those few negative comments. I so much wanted this to be the terrific, page-turning, surprising story that I fell for the hype. Sigh. I gave the performance two stars only because I felt sorry for him. He did his best. Not good enough. Skip this.

What happens when a fringe science/paranormal podcast takes on finding a lost mystery cave in the Grand Canyon? Well, they find a lot more than they bargained on. Ancient mysteries. Lost technology. Death. Destruction. A possible end of the world. A little humor thrown in for good measure.

All in all a pretty fun book. I went in not knowing what to expect and was pleasantly surprised. Waiting for more. Recommended.

Worth the credit, but I didn't love it.

This story was missing a lot of meat for me. It just fell flat and was kind of a hollow story. I finished it and the narrator was good. Didn't love him, but he was pretty good and I would listen to him again.

Adventurer, kind of like was Ghost Adventurers is to TV, was looking for a lost cave. Found it. Then it just got predictable and a little annoying for me. I finished the book and that says something, but I was left feeling meh. I may try something else from Michael Rutger, but for me this was a miss. Absolutely nothing in this book stood out for me.

Kept me up all night listening to it.

Don't start this book if you only have an hour to listen. Each chapter leads you to the next, wanting to know what happens.
If you love all the mysteries of the civilizations that came before written history, you will love this book.
Excellent characterization, vivid description.
The writing is enhanced by the excellent narration. #Weird things #tagsgiving # Sweepstakes

I enjoyed this book so much that I turned around a gave it a listen again!

I enjoyed the relationships between the characters. I imagined I was right there in the cave.

Careful What You Seek

Nicely done story... Not fast paced, mostly minimalist delivery, but manages to ratchet up tension and suspense w/o seeming effort... Reads a bit like you’re watching a reality show not meant for tv;). Survivor meets Edgar Rice Burroughs if you will... Great character work and interplay, felt grittily real... Narration is satisfactory, but brings nothing extra to the listen which may cause a little delay in getting into the story,

The key is to remain an unpredictable anomaly.

Very good book. Intriguing, suspenseful, well done. The author did a great job with the characters, I believe a lot of research was done to write this book, which made it even better. I highly recommend it! Definitely worth the credit, and worth spending money on as well!

I tried but just can’t finish this.

Can’t finish this book. The concept is good but, the story dragged on and on.