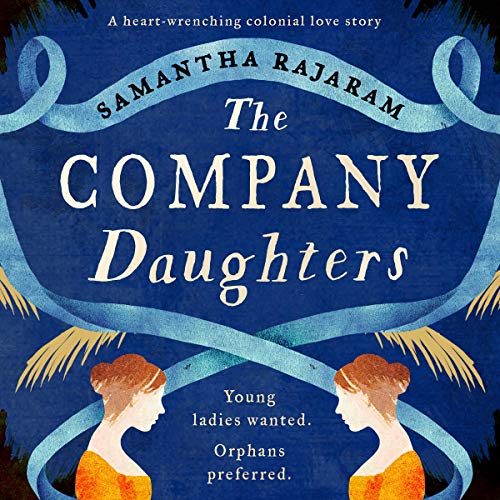 Wanted: Company Daughters. Virtuous young ladies to become the brides of industrious settlers in a foreign land. The Company will pay the cost of the ladies' dowry and travel. Returns not permitted, orphans preferred.

Amsterdam, 1616. Jana Beil has learned that life rarely provides moments of joy. Having run away from a violent father, her days are spent searching for work in an effort to stay out of the city brothels, where desperate women trade their bodies for a mouthful of bread. But when Jana is hired as a servant for the wealthy and kind Master Reynst and his beautiful daughter Sontje, Jana’s future begins to look brighter.

Then Master Reynst loses his fortune on a bad investment, and everything changes. The house is sold to creditors, leaving Jana back on the streets and Sontje without a future.

With no other choice, Jana and Sontje are forced to sign with the East India Company as Company Daughters: sailing to a colonial outpost to become the brides of male settlers they know nothing about. With fear in their hearts, the girls begin their journey - but what awaits them on the other side of the world is nothing like what they’ve been promised....

Based on true history, this is a beautiful and sensual historical novel, perfect for fans of Girl with a Pearl Earring, The Miniaturist, and The Indigo Girl.

This book is fantastically written and expertly performed. Finished it in a day. The world is richly described and at times I felt myself transported to Amsterdam and Batavia, seeing the world through Jana's eyes.

This was really one of my first forays into historical literary, but I picked it up on recommendation and hearing the narration, I was absolutely hooked. Whillans gives an authentic and haunting voice to Jana that left me compelled to get through this book in (almost) a single go.

At times lightly humorous and deeply emotional, this book is compelling and will tug at your heartstrings all the way through. Jana is a character that I enjoyed following, because she isn't so much cheerful in facing a bleak future as she is filled with grim determination to carve out a life of her own, no longer at the mercy of cruel masters or indifferent society.

I can't overemphasize how much I enjoyed this book and will be recommending it to friends.

The following review was written by my wife, who listened to “The Company Daughters” by Samantha Rajaram on Audible.

“The Company Daughters” by Samantha Rajaram is an exquisitely-written piece of historical fiction. The reader is drawn in by the tragic and beautiful story of the main character, Jana. Hers is a story of discovery... discovery of a new land, a new (and forbidden) love, and most importantly, of her own self-worth.

Rajaram’s poetic storytelling and knowledge of 1600s Dutch history combine to create an emotional story that is as informative in its truths of the time, as it is compelling in its character development.

I was also pleased to have listened to the audiobook, as the performance by Antonia Whilans is riveting. Her talent is apparent in the first chapter. Her voice is perfect for this story. Standing ovation to her.

I look forward to sharing this book with many of my peers. Bravo to this debut novel!

This was the most engaging audio book I've listened to in some time. Rajaram's depictions of this period of Dutch history seemed spot-on to me: the smug self-absorption of the rich, the desperate lives of the poor, especially women. Her vivid portrayal of the privations of the sea voyage to Batavia was perhaps the best I've ever read (heard). I won't soon forget her wrenching account of a young girl's death from scurvy. I might have skipped this book had I known it has appeared on some LGBTQ reading lists. I'm glad I didn't know since the lesbian subplot seemed natural to me, two women finding solace in each other from a harsh world. The sadness and sorrows of the story made the small joys all the sweeter. The ending leaves the courageous Jana hope for a better future. Antonia Whillans soft-spoken narration was a delight. Her young voice was perfect for Jana.

I’ve never read a book which takes place in Indonesia, and I absolutely loved encountering that world, as well as the world of the Dutch East Indies Company men and ships. The bonus here is a story which flows forth in a mesmerizing voice, shedding light on unfortunate Dutch females in that world. The Dutch practice of looking away, in order to basically deny hard facts, rings true even today in our society. As does the fact the women and children suffer because of it. But there can be hope and help, by love, friendship, honest work and its compensation, and community. And books like this.

This debut is well worth the read, and deserves a place in the growing canon of books shedding light on the female experience of suffering and triumph through the ages, all within the pages of a beautiful story of survival.

Well done! Loved the narration, too.