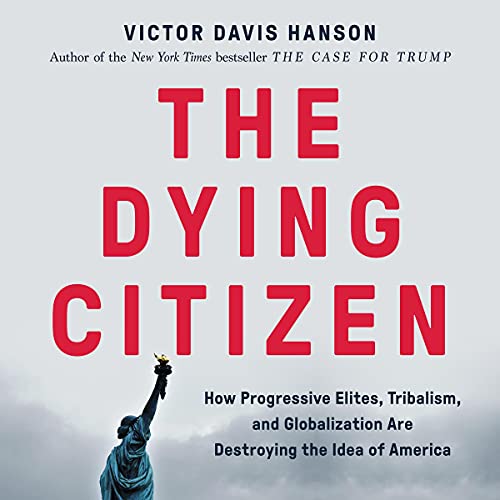 The New York Times best-selling author of The Case for Trump explains the decline and fall of the once cherished idea of American citizenship.

Human history is full of the stories of peasants, subjects, and tribes. Yet the concept of the “citizen” is historically rare — and was among America’s most valued ideals for over two centuries. But without shock treatment, warns historian Victor Davis Hanson, American citizenship as we have known it may soon vanish.

In The Dying Citizen, Hanson outlines the historical forces that led to this crisis. The evisceration of the middle class over the last 50 years has made many Americans dependent on the federal government. Open borders have undermined the idea of allegiance to a particular place. Identity politics have eradicated our collective civic sense of self. And a top-heavy administrative state has endangered personal liberty, along with formal efforts to weaken the Constitution.

As in the revolutionary years of 1848, 1917, and 1968, 2020 ripped away our complacency about the future. But in the aftermath, we as Americans can rebuild and recover what we have lost. The choice is ours.

“The Dying Citizen is essential reading for any American who cares about the fate of our nation.” (Mark R. Levin)

“In The Dying Citizen, Victor Davis Hanson shows once again why he is America's premier scholar, writer, and political observer. Drawing on his training as a classicist, and clearly informed by his deep personal experience living and farming in California's San Joaquin Valley, Hanson has written a tour de force on the history, rights, and responsibilities of modern citizenship, and the galaxy of forces that are undermining the concept of American citizenship today. Immensely enlightening but also deeply unsettling, The Dying Citizen is a wake-up call for our countrymen who want to preserve the American ideal for future generations.” (Rep. Devin Nunes)

“Citizenship brings all the enduring principles of democracy into the sphere of the individual. It honors the human need for a collective identity even as it makes room for the individual to pursue happiness. In this remarkably illuminating book, Victor Davis Hanson shows how so many contemporary problems — identity politics, the border crisis, bloated government, etc. — have only worsened for the lack of a vigorous and clarifying idea of citizenship. In this deeply democratic idea, Hanson points to a way beyond what ails us.” (Shelby Steele, author of Shame)

From an uneducated reader;

The examples put forth on the abuses of our constitutional rights and the lack of action to thwart more in the future, is mind boggling. The power wielded by unelected officials, foreign powers dictating American policies, and the details of globalization all mentioned, left me feeling the topics commonly covered by mainstream media sources are a merely a distraction to keep people from looking behind the curtain. I learned quite a bit from this book and follow Victor Davis Hanson regularly. Though not an educated woman, I am grateful when the big world picture is presented in a way that enables me to research further the topics that are now and surely will continue to impact us all. I highly recommend this book.

I listened on audiobooks. Nicely paced, very informative and thoughtful. Now if we can only get the citizens to all learn from it.

Every American Needs to Read This!

This erudite work is a masterpiece of American civics. Every citizen should read this and everyone seeking to become a citizen should too. Prof. Hanson's mastery of the classical ancient world is on full display with apt comparisons from ancient to modern world. The "new" political themes and platforms threatening our Republic are not so new after all. Gratias tibi ago magister maximus!

Starts Well, Then Veers Off

The first several chapters are well documented and argued. But the book veers into a diatribe and stays there by chapter four. This is a disappointment given the quality of the first several chapters and it feels like he became distracted by making partisan arguments rather than defining a clear and universal definition of the American citizen. This is a critical project and I was excited to read it. It has become obvious that our nation's excessive focus on our differences has left our society with little we recognize as common to us all. How we come to define the essence of the "American citizen" will define those things we most value. Values drive behavior, politics, and security. From a national security perspective, our lack of cohesion leaves us vulnerable to hostile influence, internal division, and an inability to form coherent foreign policy based on shared American values. Given Dr. Hanson's esteemed career, he could have driven these points home, but missed the opportunity. Having read and enjoyed many of his books, I will have to rank this as a major disappointment.

Unlike Leftist Progressive historical accounts this one does not change or rewrite history to reflect a particular point of view.
As with other Hanson books, the historical context is outstanding.
Well done.

I was expecting much more from Dr. Hansen. This reads like a generic ode to "the way it was when I was a kid". There's nothing new or informative here.

An outstanding historical perspective and sound overview of the state of our union. VDH never fails to enlighten. Truly, one of the great intellects of our time. Thank you, Dr. Hanson!

Victor Davis Hanson is one of the most penetrating thinkers in the USA today, who combines deep erudition with topical insight and a clear, vibrant style.

Re the Audible, The narrator has a fine sounding voice and articulates well, but unfortunately his mispronunciations are so frequent that they annoy like a person sniffing behind you in the theater or a mosquito in a midnight bedroom.

How hard would it have been to research proper pronunciations instead of just winging “harder” English words or names from classical antiquity? Don’t alleged professionals do any prep anymore?

I eventually got over the word-farts of the narrator (via Zen meditation) and managed to finish the book. Hanson is too good to be mangled by a sloppy narrator.

I give this book five stars because it’s not Hanson’s fault that a mediocre voice-talent read his book into the microphone.

Publish should re-record. Can use same reader but he has to do his homework and diligently practice.

Have a pencil and a pad ready to take notes. Do research to see if the things stated in this book are so. This work just might show you the difference between a resident citizen and an informed citizen

This book gives great true history of the foundation of the where and how America derived it's template for our government and free nation. then it transitions into how these old Marxist tricks are being used with a different subject, yet same death principles to ruin and destroy the greatest nation in the history of mankind! unfortunately the ease of life in this free society, which the constitution built and maintains. has produced a population of ignorant and lazy people who think this is how everyone on the planet gets treated! this book can and will wake you up! to the reality of the lies and destruction communism has produced for 75 plus years. if you don't understand how this great nation is crumbling, then please read this book.