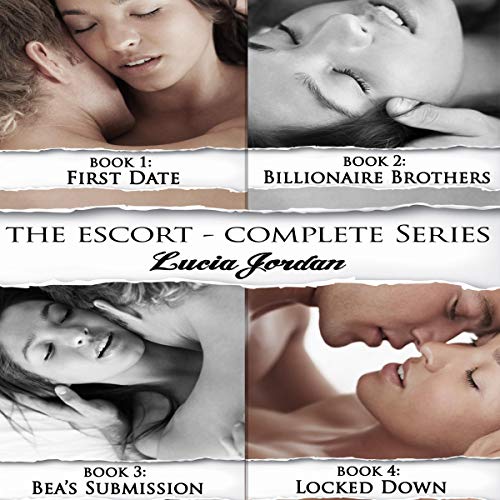 Here, presented in one volume, are the four stories that comprise the The Escort series by Lucia Jordan.

The two men are accustomed to getting what they want, and when the naïve and inexperienced Bea shows up as their date for the evening, they begin a whirlwind relationship that will change her, and the two brothers, forever.

I started with book one and had to go buy the complete series, I couldn't put it down......I sat and read it in almost one sitting great little series, can't wait to listen more from this author

Emma and Conrad those two hot hot good little quick read. Read the first book and couldn't wait to finish out there story well worth the time.

Wonderful series, this was the first time I had listened anything from this author, and am glade I did, all I can say is wonderfully amazing and I'm glade I took the chance to listen to a new author

Steamy and Sexy with a nice ending!

I must say that this is one of Ms. Jordan's best listen! It kept you in suspense as to what would happen with Conrad and Emma.

What she hadn't planned on was joining them, after the meal she had with them, where she became their dessert. Well thought out, Lucia, another great listen.

Bea thought she was helping her friend Lisa, the escort, out by going on a job with Jason and Ryan, two Scottish billionaire brothers.

Really enjoyed this book, it's ashamed it was so short but I would listen more from this series. Definitely a bargain!

A bit unbelievable that this malarkey goes on in this day and age, opened my eyes to what goes on behind closed

Couldn't put it down till there was no more! A very arousing love story !!