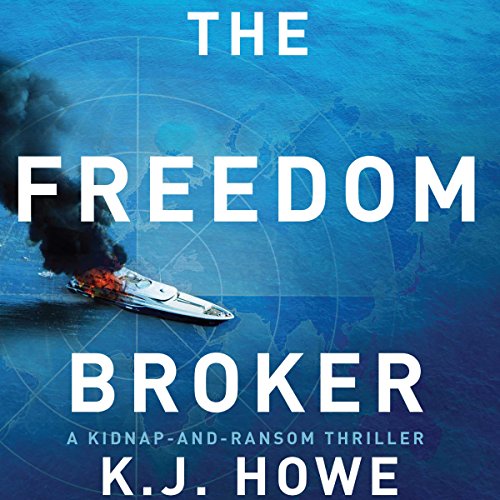 There are 25 elite kidnap and ransom specialists in the world. Only one is a woman: Thea Paris. And she's the best in the business.

Twenty years ago, a terrified young boy was abducted in the middle of the night by masked intruders while his sister watched, paralyzed with fear. Returned after a harrowing nine months with his captors, Thea's brother has never been the same.

This life-shattering experience drove Thea to become what she is today: a world-class freedom broker. Most hostage-recovery work is done at the negotiation table, but when diplomacy fails, Thea leads Quantum Security International's black-ops team on highly sensitive rescue missions to political hot spots around the globe.

Her childhood nightmare resurfaces when her oil magnate father, Christos Paris, is snatched from his yacht off Santorini on his 60th birthday, days away from the biggest deal of his career. The brutal kidnappers left the entire crew slaughtered in their wake, but strangely, there are no ransom demands, no political appeals, no prisoner release requests - just obscure and foreboding texts written in Latin sent from burner phones.

Knowing the survival window for kidnap victims is small, Thea throws herself into the most urgent and challenging rescue mission of her life - but will she be able to prevent this kidnapping from destroying her family for good?

Uneven series start but would read the sequel

This is an interesting twist in the thriller genre, and welcome on many levels. But ultimately it thrills less than it should. That said, I'd listen to the sequel. Everything is "decent" or "good" but I never felt my pulse quicken.

A surprise! Never a dull moment!

This was a bargain purchase and in one of my favorite genres. I was pleased to find a complex and fast moving plot. I will try this author again.

This is not my usual genre. I'm more of the erotic/romance, kick-ass women type of reader. I can't stand the damsel in distress who can't think for herself or pick-up a gun and save herself and others. In the romance genre there are too many of those type of women (girls in my opinion) that I avoid. I prefer Eve Dallas from J.D. Robb's In Death series. I say all that to say that Thea Paris is a kick-ass woman who loves but doesn't get paralyzed by it. She loves her family, father and brother, but as all humans are blind to their faults and they are considerable.

This is K.J. Howe's first novel and it held my attention to the very end. It's a thriller, suspenseful, who the hell is pulling the strings novel. It has romantic tension but the focus is on the story. A young, spoiled rich kid who is kidnapped and is changed forever. That sets off a whole series of events that come full-circle at the end. Even though the book is based largely in Africa and it's political and economic livelihood is important to the story at-large it doesn't get so bogged down with that information that the reader can still follow along and see how the political scheming is also moving the plot forward.

Thea Paris is an expert kidnap negotiator who has spent her life trying to make-up for her inaction as a child that facilitated her brother, Nikos, kidnapping when he was 12. That defining moment in their lives changed their family. Her brother Nikos has spent his life after his 9-month ordeal also trying to make-up for his inability to free himself but in an entirely different way. Their father Christos Paris is a hard-living oil magnate who has spent his life since that night trying to put a positive spin on his entire family without regard to his family.

This book is about betrayal, things not being what they appear to be and love blinding you to what's right in front of your face. The outcome was unpredictable and I love that. If you can figure out the ending half-way through a book then it’s not worth it. I'm already listening to the follow-up Skyjack. I can't quite remember how I got this book, Amazon might have been spotlighting it or the narrator, Therese Plummer, whom I love, lead me to it when I was looking through her list of books she has narrated. Either way I'm glad I stumbled upon K.J. Howe and I've already added her to my list of author's to watch and put on my automatic purchase list.

One last thought on The Freedom Broker, Aries will return. Because "Death is just the beginning."

I really did like this story. It kept me engaged the entire time, had some good twists and turns and I really loved the character development. I am excited to continue reading the series about Thea

Great story with good plot twists and a narrator who does a pretty darn good job. Totally recommend.

I loved this one from the beginning. The writing was super and I loved the narrator. Cannot wait for her next book!!

The narrator uses a forced breathy urgent cadence the entire time. Completely separated from the actual events in the story, as if every moment was the crescendo. She totally overplayed this. It was unbearable and annoying within minutes. Couldn't get through the first chapter. Ugh

Had high hopes for this one, but it was only ok!

I heard an interview with the author, just a couple of days ago, and this, her first thriller novel, sounded really interesting! I'm an avid listener of thrillers/mysteries, and feel that the author followed an already frequently used style of thriller story line! I'm certainly not qualified as a book critic, however, I found this book to be only mildly "thrilling" or interesting! So sorry!

Incredibly unbelievable. Will not listen to any others by this author. A waste of time and credits.