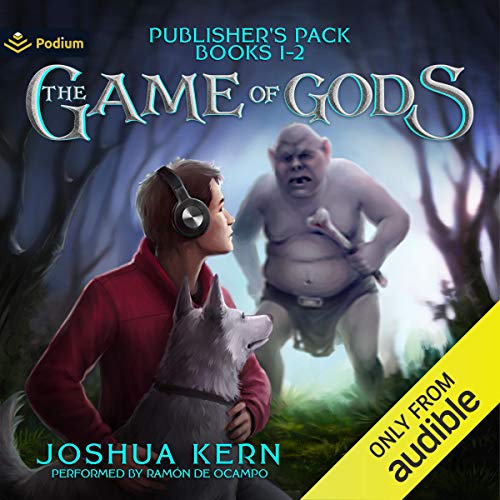 The Game of Gods: Publisher's Pack

Contains books 1 and 2 of The Game of Gods series.

The gods have gotten bored, and humanity is the answer.

Charles earns the ultimate surprise one morning when he awakens to discover the world has ended, or rather the gods of old were bored and decided to redesign how it worked. Everyone else got a nice little message that showed up their vision; everyone else woke up when the gods decided to make their decision known. Only Charles gets cursed by the gods, and only Charles gets a visit from one as well. The Game of the Gods has begun and the monsters of old are returning to our world, and all it took was the death of half the world's population and counting.

The Death of Champions, book 2:

The gods have begun to change Earth, leaving humanity confused and desperate.

Charles and Alli have managed to survive the first week of the apocalypse; unfortunately for them, it isn't over yet. The changes to the world are still ongoing and new monsters are being born. For Charles the only thing that matters is finding his sister, but what happens after? The enemies of humanity are revealed and begin to unite under the banner of enemy gods.

Champions stand on both sides of the field and it is time for some to die.

Dissappointed at the phone-ins by author

About to start book 2 a bit annoyed at how close to great this story would be if it literally wasn't written to distract from itself. Book 1: By shear plot convenience, the MC finds a reason to saddle himself with an emotionally dysfunctional female "supporting" character and an increasingly white knight type dog. Leave the dog alone, let it care about the MC enough not to throw him into danger. Why are you LITERALLY writing a dog into a person to create conflict when the dog is great to start with. The MC has a GREAT personality for making the plot move along, but it's written away by some dumb just cause excuse for why this fucked up girl is super important while he cares about no one else. Even then his cold logic could tell him there are KIDS and sideways 8 number of more worthwhile people or even pets. JUST FOR FILLER.

The narration of this story is really well done. That's the reason I finished book one. He puts feeling behind the words actually making the characters likeable at times.

Okay, Charles is either a high functioning autistic or a world class jerk. The book doesn't tell you so you're left guessing. He has a one track mind and that's to find his sister. But to accomplish his goal he forsakes literally everyone else even though he has the power to save them.

Kiera (not Charles's sister) is just a jerk. There's trauma in her past so she doesn't care about anyone apart form her sister. Kiera is pretty awful.

I did like the dog. The dog was the best part of the book.

More than just a series

I could get past chapter 6. It’s like I’m listening to the 1st draft. I just can’t listen to more of it.

did no one read over this before publishing?

the writing was painful... narrator did his best with what he had to work with

Can't wait for the next audio

I thought this was going to be another end of the world books but I truly get like the main characte. Charles is one of the guys the believe human being are all monsters before monsters are introduced to the world. Allie want to believe that human beings are kind hearted people that will fight to survive but finds out the hard way that human being aren't all the same. Take the time to read or lesson about how the God 's are thrust into their lives.

Life is a board game

I couldn't put it down. This spin on LitRpg kept me interested for the entire story.

surprisingly good. im very picky but this is worth reading. buy it and read it soon.

For a bunch of American's, the way the characters talk is weirdly stilted. I don't know ANYONE, no matter how intelligent or not so intelligent, that doesn't use contractions. Everything is 'he did not know' or 'she would not say' instead of 'didn't' and 'wouldn't'. It was throwing me off until I learned to ignore it.

So main character, Charles...I don't know if the author was trying to make him an asshole or something but the character went WAY beyond being an asshole. His general unwillingness to help, and he has to be shamed into helping hungry and dehydrated people -- that he's, mind you, taking shelter in their basement -- by a dog?!

And then there's Keira (or whatever her name). Clearly something happened to her in childhood. Clearly she's woefully anti-social to the point of extreme violence. Clearly she has some extreme anger-management problems. Clearly she's effed up in the head...but she's willing to allow a whole bunch of people to die just because they're associating with someone she considers an enemy?

Issues abound in this series but not in a good way. I'm sure the author wanted some type of conflict but I really don't think this is the way to go about creating conflict because it comes across as desperate and manipulative. It's not organic, it's contrived conflict so the character's reactions often don't ring true.