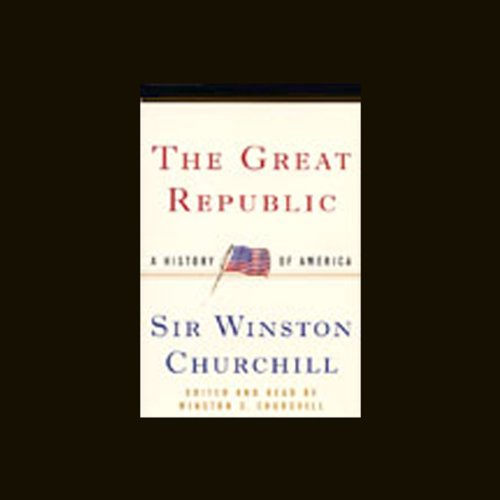 The Great Republic is Sir Winston Churchill's personal vision of American history, from the arrival of the first European settlers to the dawn of the Cold War. This retelling of the American story includes some of the best short histories of the Revolutionary War and the Civil War ever written. The bulk of this audio program, America's history up to the 20th century, has until now been found only within Churchill's four-volume work, A History of the English Speaking Peoples. The chapters on America from that larger work have been knit together into a whole, and to them Winston S. Churchill has added many of his grandfather's unpublished essays and speeches.

Sir Winston Churchill's renown as a statesman has overshadowed his great gifts as a historian and few subjects were dearer to him than America. The Great Republic is breathtaking in the flash and vigor of its insights. Only Sir Winston Churchill's special perspective on America, his experience as a leader, and his great gifts as a narrative historian could have produced a story that lays out America's history with this audio's special brilliance.

Winston Churchill combines his astute political, historical and military perspectives with his superb abilities at both writing and oratory. As one historian said of Churchill.."he writes his speaches and speaks his writings". Certainly with his grandson as narrator, one has the uncanny feeling of Winston Churchill himself through the earphones. The compilation of letters and speaches inserted by his grandson at the end of this volume are worth the price all by themselves. The history of America up to and including Teddy Roosevelt is perhaps aimed more at a British audience than an American one, however, his British perspective and keen insights are worthy of study by any American. A joy to listen to and absorb!

It is clear that Churchill loved his time spent in the United States; the letters at the end of this audiobook make clear joys found along a drive through California. The short histories of the US Revolutionary and Civil Wars are well rated and worth your time; the perspective of an enthusiastic outsider provides interesting views. Large sections of US history are compressed into few words, and relatively large word counts are spent on fine turns of history.

Overall, the balance is respectable. Audio quality ranges from good to excellent; however, one section at the end has quite a bit of static in the background.

A thoroughly enjoyable collection of essays and articles, from the greatest man of the 20th century. In a time when unfairly bashing and distorting all things American is fashionable, The Great Republic is refreshing. The world today needs another Churchill more than ever. Somebody to remind everyone that not only is America not the problem, but is the only one capable of fixing them. Churchill understood this and is evident in this book.

Maybe this is an old recording but quality was awful. Music background distracting & inappropriate. Reader good. Hard to properly rate when the part that was most important was so wonderful but the quality was so poor that it ruined the message.