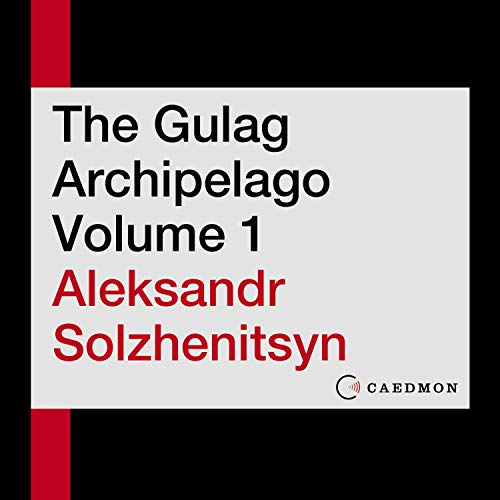 Volume one of the gripping epic masterpiece, Solzhenitsyn's chilling report of his arrest and interrogation, which exposed to the world the vast bureaucracy of secret police that haunted Soviet society. Features a new foreword by Anne Applebaum.

"The greatest and most powerful single indictment of a political regime ever leveled in modern times." (George F. Kennan)

"It is impossible to name a book that had a greater effect on the political and moral consciousness of the late 20th century." (David Remnick, The New Yorker)

"Solzhenitsyn’s masterpiece.... The Gulag Archipelago helped create the world we live in today." (Anne Applebaum, Pulitzer Prize-winning author of Gulag: A History, from the foreword)

should be required reading again

a very important book. perhaps people have lost track of what the current trend going on in America leads to. this book will remind them.

Just finished Volume 1 and it’s difficult imagine what Solzhenitsyn wrote is what actually took place. This is not to say I don’t believe it... on the contrary. It must be believed and it must never be forgotten.

The narrator does an exceptional job with his cadence and tone. His cheeky and at times humorous tone captures the good nature of Solzhenitsyn, as he endeavors to recount the most depressing atrocities of known to man. 5 stars to Davidson.

I will not venture to describe or review the story. It is what it is and it deserves to be read (or heard) by all who value liberty, believe in the dignity of the individual, and care for democratic principles. This is the story of what happens when those things are replaced with the tyranny of communism.

Should be required reading in US schools

The narrator to a few hours to get use to and really his reading was the only area of opportunity I could find. We've spent so much time and energy talking crap about the Nazis AND RIGHTLY SO but I am ashamed that our Leftist teachers, historians, media, and universities have not shown us how horrible communism is and was. Be very very careful because the stories in this series may be the future of America, if we are not careful. Just look at our Pravda style media today. Look at how they control the low information people. Look at how they can hide the crimes of the elite. If you are a parent, please listen to or read this book with your kids.

What an amazing firsthand account of a communistic society. How quickly we forget the lessons of the past.

make no mistake, the gulags were death camps
the author is very clear the enormous human toll of the camps
15 to 20 million people lived in the camps at a time being worked to death
all sent to prison for disagreeing with the soviet state, or even for no reason at all
many many religious were sent because the USSR was declared atheist
the author accounts his own struggle, as a committed marxist, coming to terms with the reality of communism
the author puts the blame squarely on communism itself, not stalin nor lenin
the mass executions of over a million people and the even greater purges of untold millions were all part and parcel of eliminating the ownership of private property and religious institutions, directly derived from communist principles

A must read for everyone

I feel so blessed to have had a chance to listen to this book ! A very sobering experience of the nature of evil, and a picture of tenacity I will never forget.I’m starting book 2 after writing this ! Thank you !

Listen While You Still Can

Every human being should read this to understand the Russian people and the application of Communism and totalitarian gov't.

A Lesson in Evil, Philosophy and Psychology

Hitler's evil came at the world in a blitzkrieg that the west could not contain, Stalin's evil was a way of life for mostly Eastern Europe alone, and so the west chose to contain it.

Important reading. Historical but still relevant in current times. Highly recommend to anyone that wants to be enlightened to such important history.