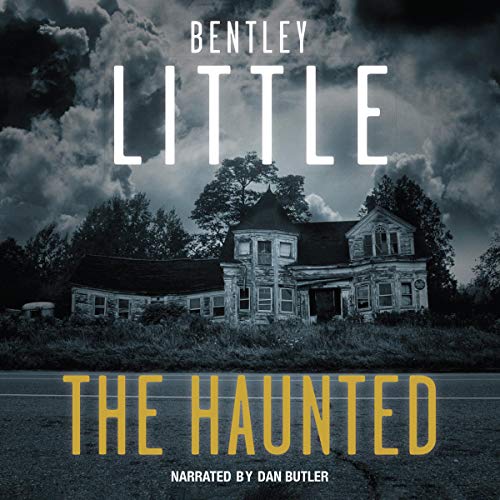 The Perry family's new house is perfect - except for the weird behavior of the neighbors, and that odd smell coming from a dark corner in the basement. Pity no one warned the family about the house. Now it's too late. Because the darkness at the bottom of the basement stairs is rising.

enjoy gripping right to the end . couldn't put it down . if you like a good twister you will enjoy this one

Truth be Told, Kind of Boring

This is not Bentley Little’s best book. The story didn’t seem as developed to me as some of his other books. If you are a fan, it is worth a listen. If this is your first Bentley Little book...choose one of his other ones like “The Store”, “The Consultant” or “The Resort” The performance was great, however, so kudos for that.

I'm still giving this book three stars because most of the story was good. It was entertaining, I was buying the plot, it worked. Then things changed towards the ending, it's like Little's editor quit, or like someone else wrote the ending. It was bad. It yanked me out of my suspension of disbelief and made me say "really, that's the best you've got?" It wasn't that I didn't like "the end" of the book, the whole story just fell apart with about 20% left to go.

A Ghost Story That Delivers The Chills

I love a good, scary ghost story. The problem is that so few of them are downright scary. I've been burned time and time again by stories that hint at the creepy or take you right up to the edge of something scary, but can't pull the trigger. "The Haunted" remained in my Wish List for some time because of this.

You can imagine my delight, then, that when I finally took the plunge and downloaded the book, I found "The Haunted" fulfilled its scary promise. In addition to being scary, Bentley Little gives us characters we can relate to and root for. A haunted house story (and believe me, that's not a spoiler) means very little if we can't be bothered to care for its victims. We care a great deal for these victims, as Little has made them real people, with real pain and real joy.

Although I found the conclusion a little unsatisfying, this was largely offset by the powerful emotional reaction the author is able to elicit. "The Haunted" is not perfect, but it is very, very good. A must-read for those who, like me, are always on the hunt for a good, scary ghost story.

What did you love best about The Haunted?

Almost everything, from the writing, the characters, the plot, and the narration was all great. But what I really liked was how personal this book felt. One of Little's best, that's for sure.

Have you listened to any of Dan Butler’s other performances before? How does this one compare?

No I have not, but I will now.

This book was a lot of fun to read, despite it's bleakness. Bentley Little is, however, known for his sense of humor. Do not look for that here. This is a book that is dark, bleak, and full of despair as the Perry family loses control of their average, every day lives.

The story is about an innocent family haunted by their new house, but it reminded me of self-abuse spinning out of control, the unknown anger and angst of adolescence, the fear and desperation of a child stuck in a family haunted by its past and current abuses. This book is about what's not in your control, and how what's good and average can turn to bad and abnormal at any time.

Such a waste of time

Bentley Little's books always try to shock you, but it's really just the same one-trick pony every time. This book is no different. Starts off strong, but becomes cliche and boring less than mid-way. He fills this space with violent sex and gore to try to keep you interested, but after a while, you become sort of desensitized to it and you realize none of it is moving the plot forward. The end of this book was as sappy as the rest of the novel was sexual and bloody, and this about-face made you feel a little like you flicked the TV channel from a horror movie to a Lifetime Christmas special. The ending was incredibly anti-climactic. It felt like he didn't really care how this story ended, so long as it ended. Honestly, that's how I felt too.

Entertaining from start to finish!

I love a good haunted house story and this was definitely that. The author did a fantastic job painting a picture of the family dynamic amidst a haunting in the families home. The only thing I didn't like was the effort by the author to inject political correctness into the novel by means of a virtue signaling lead character. The effort made by the author to let everyone know he's a progressive liberal seemed forced and the story could have done without it for the better.

Both good and disappointing

I would probably not recommend this book as one of the better novels of our time. I am an avid King reader, but I often find that King gets too lost in details and aspects not always relevant to the plot or even the over all feel of the novel. In Bentley's writing, I appreciated that there was never a dull moment. However, like King, he included unnecessary sleaze that at times was somewhat disturbing. My personal preference for horror is actual horror, rather than sexual or violent gore. I also found the novel heart breaking in places. The ending was horrible and made no sense.

Would you ever listen to anything by Bentley Little again?

I would give Bentley one more chance.

Didn't have a favorite

Was The Haunted worth the listening time?

Scarier Than I Thought it Would Be

The Haunted is a fast paced ghost story with like-able characters. It was much creepier than I expected and just different enough from the run of the mill haunted house stories. Dan Butler's narration was great. He managed different voices for the characters which is something that grates on me with other narrators.

Why do authors think they must jam a book full of sexual situation that don't even move the story forward? For that matter, why would an editor okay it? Yeah the house is haunted by sexually deprived ghosts. But it could have been a good stand alone story without involving the neighbors or kids or homeless guy in the sexual situations. Oh and there's the part where the dad 'slips on his pants'.....really? He was in a hurry, but he had time to 'slip' into them? It was free so I took a chance. Bentley Little is a Little Bent...

It’s like a pedophile wrote this book. If it was for the disgusting sex scenes it would be a child story

What disappointed you about The Haunted?

(Spoiler alert:) The reactions of the family to these disturbing scenarios seemed extremely unrealistic. The reluctance to communicate between family members and the refusal to wake others when things went bump in the night seemed less than plausible. I get that the presence in the house drew them in... made them do things they weren't quite aware of but all were in possession of their mental faculties most of the time. The sudden bursts of rough sexual acts caught me off guard and left a sleazy aftertaste. The ultimate climax of the book just didn't seem to follow the flow of the story.

The almost constant repetition of certain bits of dialogue became obnoxious. "I'll kill you both..." and "take off your pants" were repeated so often I found myself rolling my eyes each time, thinking that the author must consider the reader/listener awfully inept at recalling plot points. Also... the writer's expressions could use a bit of diversity. Another expression that grew old entirely too fast was "persue/follow this line of questioning."

Has The Haunted turned you off from other books in this genre?

No. I will always be an occasional listener of horror fiction.

During dialogue, the narrator's tone never seemed to match the mood of the context. When a character cried out in panic, anger, lust, or fear the narrator sounded bland, bored, or conveying the exact opposite emotion.

What character would you cut from The Haunted?

Rick, the owner of the print shop. He was really only an occasional distraction who served little purpose in the overall plot, other than to convey Claire's distaste for Julian's friends.

There were excellently written thrills and incredibly bizarre moments that made my nose pinch with revulsion and disgust. Bentley's capability to write gruesome or thrilling fiction is unquestioned. I was properly scared a number of times... but I was able to predict the ending about an hour and a half before the book's conclusion and found myself so disappointed to be proven right.