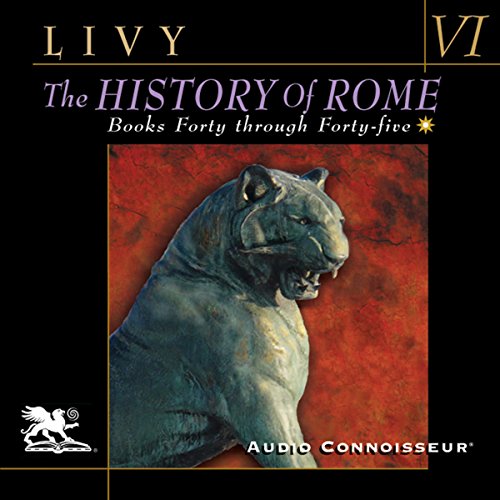 Livy's splendid adventure of Rome's rise to dominance comes to a close in this concluding volume of his magnificent history. Sadly, the work abruptly halts near the completion of book 45, which concerns events in Greece in the year 168 BC. The missing portions, numbering 107 books, have never been found. The original text of this monumental history, which came to 142 books when he completed it, carried the story to 9 BC. Livy called his work Ab Urbe Condita, though we refer to it as The History of Rome.

Almost the entire subject of volume six deals with Rome's struggle with Macedon, ending in the defeat of Perseus at the battle of Pydna. It was an epic struggle with a dangerous foe. And though it was certainly not intended by Livy to be the end of his work, this segment does provide a spectacular display of his writing talent and penchant for drama... a fitting end to an epic work. Translation: Roberts

"There is no state which will not have not only wicked citizens at cergain times but an inexperienced commonalty always." - Livy, History of Rome, XLV, xxiii

BOOK 40 sees Philip, king of Macedonia, struggle with the paranoia of a king with two ambitious sons, hemmed in by Rome, and bucking against the contraints of Roman power. Book 4o begins with King Philip ordering the kids of the nobles he had in prison be put to death (sounds a bit New Testament to me).

The sibling rivalry between Perseus and Demetrius culminates in Perseus accusing Demetrius on a false charge of parricide (among others) and an attempt to seize the throne. Demetrius, was done in by both his paranoid father, his unkind brother, and good relationship to the Roman people.

Philip, old and overcome by grief (I guess that happens to people when the kill theirj "good" kid), because he killed Demetrius plans for the punishment of Perseus and desires for his friend Antigonus to succeed to the Macedonian throne, but he dies too soon and Perseus becomes the new king of Macedonia.

BOOK 41 sees the fire in temple of Vesta going out. Livy LOVES auspices, omens, portents, and signs. Rome fights and subdues a bunch of people (the Celtiberians, Ligurians, Histrians, Sardinians, [and in Spain] the Vaccaei and Lusitanians).

In Macedonian King Perseus, son of Philip, sends an embassy to the Carthaginians and making diplomatic overtures to the other states of Greece.

BOOK 42 sees Q. Fulvius Flaccus stripping the temple of Juno Lacinia of its marble tiles, in order to roof a temple which he was dedicating. The senate orders the tiles to be taken back (but nobody knows how to put them back on, so they just leave them in the temple). Eumenes, king of Asia, complains about Perseus. Rome declares war against Perseus and Macedonia. P. Licinius Crassus, the new consul, is placed in command. He goes to Macedonia and fights with Perseus in Thessaly. Envoys from Rome are to request the allied states and kings remain loyal, the Rhodians waver. Book 42 details the campaigns against the Corsicans and Ligurians (think Genoa).

One thing I love (in this book and others) is how fixated Livy is with auspices, portents, three-legged cows, and the drowning of hermaphrodite babies. I think part of it goes back to understanding Livy was writing from a period in Roman History where Rome was starting to become fairly superficial with its practice of religous rites and was trying to encourage his modern readers to take some of the sacred (temples, gods, rites) more serious.

BOOK 43 sees several praetors condemned for administering their provinces with greed and cruelty. P. Licinius Crassus the proconsul plunders numerous cities in Greece. The commanders of Roman fleets pluder many allied cities. Book 43 sees King Perseus winning several victories in Thrace (Dardanians and of Illyricum). Spain revolts, but the revolt goes nowhere after Olonicus is killed. Marcus Aemilius Lepidus was chosen chief of the Senate by the censors. This book has a few missing parts.

BOOK 44 sees Q. Macius Philippus and his armies entering Macedonia through difficult passes, seizing a number of cities. The Rhodians send an envoy to Rome threatening to help Perseus unless the Romans establish peace Macedonia. This doesn't go well in Rome. L. Aemilius Paulus, consul for the second time, is put in charge of the campaign in Macedonia. Paulus prays before an assembly that any disaster threatening the Roman People be turned against his own household. After setting out for Macedonia, he conquers Perseus and brings all Macedonia under control. This book has a few missing parts.

BOOK 45 sees Perseus captured by A. Paulus in Samothrace. Antiochus, king of Syria beseiges Egypt (Ptolemy and Cleopatra*). Envoys sent to Rome's Senate. Senate requires Antiochus to pull out of Egypt. Rhodes' envoys supplicate themselves to Rome and are sent aways as neither allies or enemies. A. Paulus celebrates his triumph (his own soliders complain about not having enough booty). S. Sulpicius Galba speaks against the soldiers. Paulus' two sons die. This book has a few missing parts.

The last of the Livy. The remaining books: 46-142 have been lost. It really is sad to think that we only have about ~35 books of Livy. They are really amazing. His prose is clear. His speeches are amazing. And while he isn't a perfect historian (his dates sometimes conflict) he did organize Roman history in an expansive and rational way. I would have REALLY enjoyed reading about his take on the Fall of the Roman Republic and the rise of the Empire. His last book (142) supposedly ends his history with the death of Druses.

I don't get too carried away with regrets, but it really does feel like discovering that Shakespeare wrote 140 plays and we only have 36 extant. Imagine another 104 Shakespeare plays!!!

* These are not the Egyptian Kings you are thinking of. (Like Scipio, Cato, etc., Cleopatra and Ptolemy are family names that appear again and again).

An Cliff hanger for the ages.

'This part of the manuscript is missing, we continue.' makes this a cliffhanger.
A Manuscript. How many of those have you read?
The missing parts give a sense for how old this Manuscript really is and how lucky we are that more was not lost. I picture this being rather popular in it's age, reason enough to enjoy it.
The story itself is easy to follow having been translated from a near extinct language, the long Speeches and Dialogs can be.... tiring. But consider, the meaning is gleaned from that comatose language and words give a sense of meaning instead of a match.
As ever, a fine performance by Charlton Griffin. A great stoic voice, the Greek names give him small fits that have dogged non Greek speakers through out the ages.
Overall, well worth it.

Epic! - The Great Leaders of History All Read Livy

Amazing work! Charlton Griffin is fantastic once again. It's easy to see why Livy's History of Rome was a major inspiration for Niccolo Machiavelli. Don't waste your time reading modern history, it is full of modern revisionism - read the real history from the ancients like Livy. all the great Kings and leaders of history did so - so should you. HIGHLY RECOMMEND!

The only con - Most of the work is "lost" to history, shame!