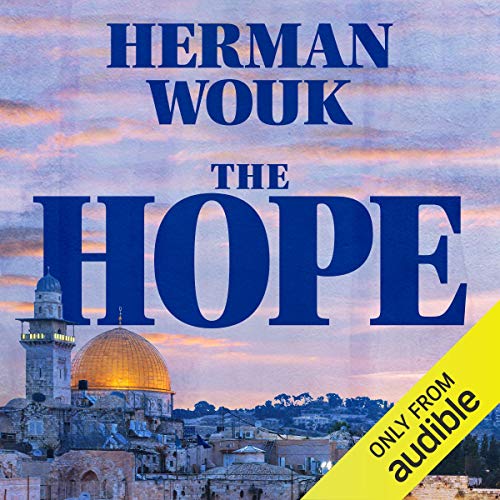 Starting in 1948 and reaching its climax during the Six-Day War of 1967, The Hope begins the story of Israel, a country fighting for its life - outmatched and surrounded by enemies. Zev Barak, Sam Pasternak, Don Kishote, and Benny Luria are all officers in the Israeli Army, caught up in the sweep of history, fighting the desperate desert battles and meeting the larger-than-life personalities that shaped Israel’s fight for independence. The four heroes, and the women they love - three Israelis and one American - weave a compelling tapestry of individual destinies through the grand social history of one nation’s struggle against the odds.

Their story - and Israel’s - is concluded in The Glory, which picks up from the Six-Day War and carries through to the hope for peace of the Camp David accords. In this two-part epic, Pulitzer Prize-winning author Herman Wouk brings out the passion, romance, and heroism of Israel’s struggle for survival - adding to his oeuvre yet another enthralling saga that’s impossible to put down.

About the Author: Herman Wouk is one of the most widely-read American authors in the world. His books have been translated into 27 languages, and many of his works have become best sellers. He is perhaps best known for The Winds of War and War and Remembrance, an exhaustively-researched two-part historical series telling the story of World War II from the perspective of two fictional families whose lives were irrevocably changed by the war and the Holocaust. Sixteen years in the making, the epic involved extensive archival research including travel for research to England, Germany, Italy, Poland, and Israel. The Winds of War and War and Remembrance were adapted for television in a 30-hour series that won the 1989 Emmy Award for Outstanding Miniseries and was, according to ABC, “the most watched television show in history.”

Born in New York City to Russian-Jewish parents, Wouk graduated from Columbia University and started out working as a comedy writer for Fred Allen’s radio show. After the attack on Pearl Harbor in December 1941, he joined the Navy, serving in eight Pacific invasions and earning several battle stars. During his service in the Pacific he had turned to writing, like Lieutenant Keefer in The Caine Mutiny, for an hour or two before dawn. After his discharge in 1946, Wouk finished his first novel, which became a Book-of-the-Month Club selection, and he soon followed up with the international best sellers The Caine Mutiny, and Marjorie Morningstar.

Wouk won the 1952 Pulitzer Prize for fiction for The Caine Mutiny. He has also been awarded numerous academic honors, including a degree from the Hebrew University in Jerusalem. In January 2001, UC San Diego established the Herman Wouk Chair of Modern Jewish Studies, and in 2008 he was given the first Library of Congress Lifetime Achievement Award for the Writing of Fiction.

“One of our best writers today - a modern Charles Dickens - is Herman Wouk… The Hope is not only a good read, but it also causes a good think.” (William Safire, New York Times)

I enjoyed the author’s way of telling modern Israel’s history through the stories of both fictional and nonfictional characters.
Given the amount of Hebrew and Yiddish woven throughout the story, I was disappointed with the narrator’s lack of command of those words and phrases. Where was the producer? Are there no experts to consult with? Also, the narrator’s dialectical accents and character differentiation lacked range and accuracy. Despite these shortcomings and frustrations I enjoyed the book and will listen to part 2.

I struggled to finish this novel when I had it from the library in paper 15 years ago. I found myself skimming through looking for the next piece of what happened to my favorite characters and so forth. Listening, now, was a much better experience, I spent a LOT of time listening to this very long novel in a rather short time, for me, and am going to head right on to Book 2!

The important thing to note is that none of the individuals in this story are the central character. While Wouk goes back and forth between the various plot threads, following a group of military families through some decades of their lives, love affairs, children being born and growing up, the real central character in this novel is Israel itself. The people are almost only the movable pieces against the backdrop of the story of the history they are living through.

I thought that the performance was a little flat. Ashby did a good job switching around the different characters's voices, keeping a lot of different accents straight, no small feat. But when voicing the narration sections he was a little too unexpressive for my taste, thus a 4 instead of 5. Overall a solid job though which did not distract from my engagement with the story.

One of my favorite books along with The Gory!

Along with Winds of War and War and Remembrance, I love The Hope and also The Glory. I have listened to my copies on CD quite a few times over the past years and was thrilled when Audible now had it and I could download and listen to it again on my ipod. I'm not thrilled with the narrator. He is very bland. I was very disappointed that they didn't use the Theodore Bikel version. He originally narrated the CD's. His accent gives it so much more depth and feeling. Of course it helps that he was Jewish. The characters seemed so much more real. This narrator just seems to plod along with no feeling and not much difference between the characters. I was very disappointed, but don't let this keep you from listening to the books. The story is just to good and you eventually get use to the narrator.

Review of The Hope

The Hope by Herman Wouk is an excellant way to review the early history of Israel.

Herman Wouk manages to take historically accurate situations, occurrences, facts, people and places and tell those stories in ways that fire the imagination and engage the reader’s interest and at the same time inform snd educate...brilliantly. Now on to The Glory!

So so glad this was available on audio book!!

The performance is good, but was a bit slow for my taste. I found listening at speed 1.25 to be ideal.

Entertaining, uplifting and enlightening- Wouk is a genius

Listened and read this in advance of trip to Israel after many years away. Great context and I’m more appreciative of what Israel means to the Jews and the free world.

Loved the Caine Mutiny…Winds of War, War and Remembrance…so I really looked forward to The Hope. Unfortunately, there is nothing of Wouk’s usually vivid characters and engaging narrative…Stilted, dull and (as a combat veteran myself ) entirely unbelievable with improbable “war” dialogue bordering on the absurd. Ouch. Couldn’t even finish.

Too much romance, Not enough history

A good read but I was hoping for more historical descriptions of the Arab-Israeli conflict, which Wouk has built his writing reputation on in past novels. Houk spends approximately half his time writing about romantic relationships and marital affairs of Israeli military officers, If I want to read about that I will read a Harlequin romance. Houk presents the marital affairs as a normal part of a military officers life which is too far disconnected from reality in my experience as a retired US Air Force Officer. I wish he would have left these relationships in the background and focused on the historical political, social, and economic aspects of the formation of the Israeli state. I was seeking enlightenment from Houk and not a soap opera. It would have cut the length of the read by a significant amount. Otherwise it was a good story and I recommend the book to those who are interested in the topic of the Israeli State and can deal with the long romantic detours.

This is not a very good book. Weak characters, not very good writing. But I assume the history is more or less correct.