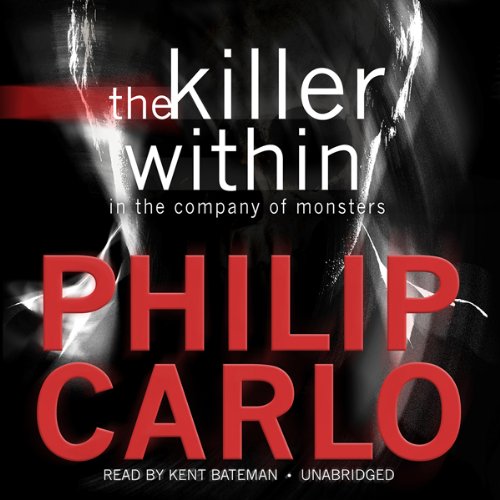 In researching his acclaimed true-crime books, Philip Carlo interviewed some of the most infamous criminals and killers of our times in prisons and on death rows throughout the country. He was able to forge trusting relationships with his subjects, enabling him to extract the facts behind their monstrous acts and identify what motivated them to commit their horrific crimes.

Carlo’s investigative achievements are remarkable, but what wasn’t known to his readers is that, while working on The Ice Man, he learned he had amyotrophic lateral sclerosis (ALS), a terminal illness that causes all of the muscles in the body to atrophy over time. Suddenly, after years of penetrating the minds of killers, Carlo found himself being pursued by the grim reaper. But rather than lying down and succumbing to the disease, Carlo continued to work, his books still getting published to both critical and commercial acclaim.

In The Killer Within, Carlo documents his difficult experiences with ALS and explains how he managed to continue writing prodigiously in the face of adversity. The Killer Within is a gripping, suspenseful book that pulls the listener into the netherworld of Mafia bosses, Mafia hit men, and serial killers, as well as the hard realities of dealing with a fatal disease.

“An inspiring testament to what the human mind can accomplish in the wake of devastating change. A brave psychological exploration of a writer’s craft and terminal illness.” ( Kirkus Reviews)
“Carlo’s knack for anecdote spinning and his own heartbreaking, yet ennobling, confrontation with ALS results in a unique and spellbinding memoir.” ( Booklist)
“It’s fascinating to see how he copes day to day with his illness as well bringing his experiences to the fore. It’s a brave offering from the author and one that will hopefully get the readers to understand things a little clearer.” ( Falcata Times)

Philip Carlo is awesome author , wish he was still around.
rip miss you ..

How right Laura. I too was mislead by this book. The references to his work are trite and the book was self indulgent and self protective. And I can speak from experience. I too have neuromuscular disease. I wanted to demand a refund based completely on the synopsis but ALS is mentioned in the expanded synopsis. My bad for not reading further. Caveat Emptor. Your bad Mr. Carlo is, the book.

The title and book sample is very deceptive. It uses the names of serial killers and insinuates that the book will be about interviews the author has conducted with them; whereas in actuality the book is just a bio about the author's disease. I am sorry that he became sick, but I believe the book should not deceive the reader as to its contents.

Would you try another book from Philip Carlo and/or Kent Bateman?

THIS book is NOT about what you think its about!! its about a deadly disease the author has. wasted my money and didn't even listen to the book it was horrible.