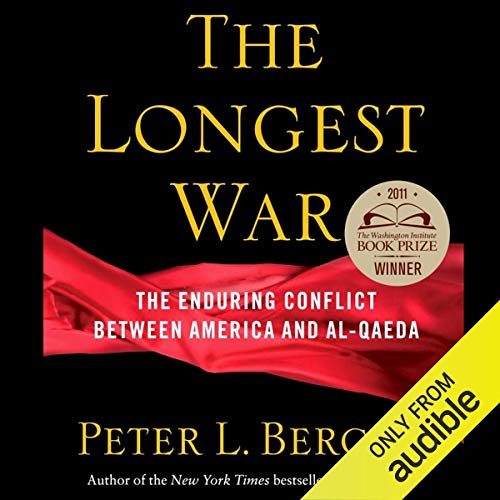 Ten years have passed since the shocking attacks on the World Trade Center, and after seven years of conflict, the last U.S. combat troops left Iraq - only to move into Afghanistan, where the 10-year-old fight continues. The war on terror rages with no clear end in sight.

In The Longest War, Peter Bergen offers a comprehensive history of this war and its evolution, from the strategies devised in the wake of the 9/11 attacks to the fighting in Afghanistan, Pakistan, and beyond. Unlike any other book on this subject, here Bergen tells the story of this shifting wars failures and successes from the perspectives of both the United States and al-Qaeda and its allies. He goes into the homes of al-Qaeda members, rooting into the source of their devotion to terrorist causes, and spends time in the offices of the major players shaping the U.S. strategic efforts in the region.

At a time when many are frustrated or fatigued with what has become an enduring multigenerational conflict, this book will provide an illuminating narrative that not only traces the arc of the fight but projects its likely future.

Weaving together internal documents from al-Qaeda and the U.S. offices of counterterrorism, first-person interviews with top-level jihadists and senior Washington officials, along with his own experiences on the ground in the Middle East, Bergen balances the accounts of each side, revealing how al-Qaeda has evolved since 9/11 and the specific ways the U.S. government has responded in the ongoing fight. Bergen also uncovers the strategic errors committed on both sides - including the way that al-Qaeda's bold attack on the United States on 9/11 actually undermined its objective and caused the collapse of the Taliban and the destruction of the organizations safe haven in Afghanistan, and how al-Qaeda is actually losing the war of ideas in the Muslim world.

Amazon Best Books of the Month, January 2011
"For readers interested in a highly informed, wide-angled, single-volume briefing on the war on terror so far, The Longest War is clearly that essential book....The lucidity, knowledge and carefully reasoned logic of [Bergen's] arguments lend his assessments credibility and weight, even when he is challenging conventional wisdom." (The New York Times)
“When the War on Terror is consigned to the history books, one name will dominate as the steady, clear-eyed chronicler of that period. Peter Bergen was among the first to note the rise of al-Qaeda, and he is still on the case. The Longest War is a vital and essential account of the central conflict of our times.” (Lawrence Wright, author of The Looming Tower: Al-Qaeda and the Road to 9/11)
"The first [book] to credibly cover the global sweep of events over the last 10 years, exploring not just American views but also Al Qaeda's....“The Longest War” is one of the most important accounts on the subject to appear in years. But be warned: You will read it and weep." (New York Times Book Review)

This book is both interesting and informative and also filled with Bush bashing and not as great as it could have been, strange huh! As a history of the Al-Qaeda and the American conflict it is to a degree informative and well researched but the author, who no doubt knows the region lets his bias against the Bush administration occupies too much of his presentation and hurts it overall premise as being a history of the "Enduring Conflict between Al-Queda and America'. It is unfortunate since this could have been a great book if it just treated history with blind eyes. Too often the author dismissed the dangers posed by Al-Queda or their operatives as being an incompetent bunch, in fact, I almost feel that in some areas he makes excuses for them and then dwells with two or three times the vectorial on how bad the Bush group was. I am no supporter of Bush and feel that the his Administration was perhaps the second worst Administration in modern history, right behind Carter and perhaps equal to LBJ who lied to my generation and sent us off to a needless war in Viet Nam. I read the book wanting to know more about the workings of Al-Qaeda and not repeating the known history of the Bush missteps. Would I recommend the book, yes...but be aware it is not really about the enduring conflict as much as it is about the author's dislike of Bush.

Wow! What a disappointment!

I very rarely write a review of anything that I purchase online but I felt like I had to for this book. I don't think that I've been more disappointed by a book in my life. Based on the description of the book, I really expected to get insight into the strategy, tactics, and history of the rise of militant Islam and the ongoing war against terrorism. Instead I got a book nearly entirely dedicated to the bashing of the Bush administration. Not that I would have a problem with that except that this is not how the book is described. To top it all off, in the bashing of the Bush administration, the author often uses the same flimsy and unsubstantiated evidence to criticize the Bush administration as Bush used to make decisions on the so called "War on Terror". I'm by no means a neo-conservative Bush apologist but this book was really poorly written and especially poorly described. Unless you really love everything related to the bashing of Bush (for nearly 17 hours of your life), I would seriously suggest that you steer clear of this book. I wonder if Audible.com gives refunds.

Credit where credit is due

I was interested in this book for a couple reasons. I recently read George Friedman's "America's Secret War" (which I loved) and wanted to see what Bergen thought about the way the Iraq war was sold to the American people. I also wanted to learn more about David Patraeus, the Anbar Awakening, and "the Surge". In general I found Bergen's account of the build-up to the Iraq war naive and missing the strategic and geopolitical reasons for the war that Friedman discusses. It was clearly bias and falls into the trap of believing that Bush is a fool, a trap that I fell into many times during his administration. I do give Bergen credit for his account of "the surge". He gives full credit to Bush for his willingness to keep in the fight and allowing Patraeus to pull victory from the jaws of defeat. And yes, it was victory that I never thought would be possible. More importantly, it demonstrated to the world that American resolve should not be underestimated. Obama gets it now and I bet that he has much more respect for Bush than he did before moving into the White House. Obama might even be a little embarrassed about some of his naive foreign policy remarks during the campaign.

Final thoughts: Bergen is a journalist with an above average understanding of the big picture when compared to his peers. But as we all know, that isn't much of compliment. The first half of the book betrays his agenda and his inability to grasp the strategic picture. The second half of the book saved it for me, especially the account of the surge. It gave me a new respect for Patraeus and his place in history.

Good listen, recommended. Very good narrator, material is in depth and well-put together. Have read/listened to a dozen books on the war, early Bin Laden, Irag, Afghanistan, Bush, etc. This covers a great deal of the same ground but is more complete and relevant with excellent new source material from those who participated in the process. I was part of the 5% of the USA population against the Iraq war when we went in, and dislike Bush and his administration intensely...but I must admit this book improved my view of Bush himself, while Condi Rice comes away as more damaged and Cheney and his cohorts remain evil. Also over time I become so consumed with how bad the Bush team was and how screwed up the war was it is a pleasant surprise to listen here to how well - proportionately - things are going now and how Bin Laden is back on his heels. The current group of military commanders also comes through in a positive light. Take a listen, this completes the picture, rounds out what you know and will give you hope.

Well narrated and a good story line. I would recommend this to my friends and family. Thanks to Audible for having this in store.

The author bends over backward to place all blame on a still forming administration that had been in office less than 8 months yet absolves the previous administration completely. I should have know that if the New York Times liked it the book was bound to be fatally flawed.

I know better than to expect objective well reasoned history on events that happened less than a decade before the writing. Foolishly, I bought this book anyway and paid for my mistake. The writer is just another in the "Bush lied people died" leftist chorus line with no original thought or insights to share. If you think that the murder of the people in the World Trade Center was understandable as an expression of anti-American repression or want someone to paint Islamic fanatics dealt with firmly by the Bush Administration as victims, this is the book for you. The anti-American slant is so blatant and the smearing of every member of the Bush Administration so pervasive that you quickly realize the title refers to the unending liberal campaign to indulge in Bush Derangement Syndrome - not to the serious problem we face because Islamic fanatics want to kill every person who does not think and behave exactly as they do. I quit listening half way through once I began to fantasize about water-boarding Mr. Bergen. Not scholarly history -do not waste your credits on this tripe.

This book was sold on false pretenses. The description should read simply “Bush bashing galore”

Excellent summary of the American war on terror

This book does an excellent job of walking through the war on terror since 9/11. For those who want to remember all the events and the sequence they played out in this is a good book. It's weakness, which has been mentioned by a couple of reviewers, is that it is not an intensive analysis of the events and players involved over that time. I don't think that was the intention of the book though. The author is a reporter who spent a lot of time in the regions and on the issues. He even had the chance to interview Bin Laden before 9/11. Definitely worth a read to remind yourself of the events that occurred over this last decade.

Solid overview of US War on Terror up to 2010

Solid overview of US War on Terror up to 2010. Is a little politically biased in parts, but generally tells a thorough story.