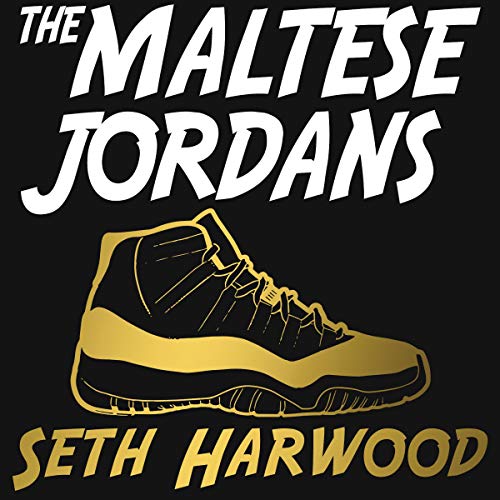 The Maltese Jordans: The Worldwide Hunt for the Grail of All Grails

A basketball legend. A mythical pair of sneakers. A bounty for Jack Palms. What if Michael Jordan played one secret pickup game in summer 1996 to pay off a debt so big it would get him banned from the NBA for life? What if that game was on a private court in Malta, and Jordan’s parting gift was a jewel-encrusted pair of Jordan 11s for the king, a pair of shoes so special and rare that they could be worth millions - if they exist?

Follow Jack Palms as he tracks the man who knows the truth about these sneakers, a felon who just skipped bond in San Francisco to chase his dream and the mythical pair of kicks that can only go by one name. In the vein of Elmore Leonard and Carl Hiaasen, with touches of Bill Simmons and Rick Reilly, Seth Harwood presents his next novel, The Maltese Jordans. Buy The Maltese Jordans to start listening now.

Ce que les auditeurs disent de The Maltese Jordans: The Worldwide Hunt for the Grail of All Grails

Having listened to the last two Jack Palms stories, I really like how these stories are maturing. While searching for the Holy Grail of sneakers seems silly, this was a really fun listen. I never thought I would enjoy a book that centered around shoes, but I think this was the best one so far. I liked the characters that were added and really enjoyed the whole plot. While this is a series and they do reference past events, these are standalone and don’t need to be listened to in order.

I am not a sports fan and do not care about sneakers whatsoever, that being said, the plot was really fun. I liked the whole conspiracy of trying to find a mysterious pair of sneakers that are only rumored to exist. I have to say I learned more about Jordans than I ever needed to know, even if it was made up. The sneaker convention and underground groups dedicated to rare shoes was quite interesting and really enjoyable. As someone who only buys a specific brand of shoes, I really liked hearing about the sneakerheads dedicated to a specific brand. I don’t know if any of what I listened to is real but a part of me hopes that it is and anyone who grew up when Jordans were all the rage will definitely appreciate the nostalgia.

Jack Palms is a great character. I like how over the series he is becoming more hard core. At first, I felt everyone was beating him up, after all those fights I feel he is finally becoming his actual movie character. The rest of the characters were good as well. I liked hearing everyone talk about the sneakers and how they were an important part of their lives. I especially liked the surprise guest at the end and appreciated that it wasn’t a nasty attack.

Seth does a great job narrating. I feel like as Jack Palms matures, so does Seth’s narration. I felt like he was taking the characters more seriously and you can hear that in his narration. The only character I didn’t like the voice for was M&M’s mother, that voice was just ridiculous.

This book had everything! A great backstory into Jordan and the history of his Nike line. A great, action filled, dive into the world of sneaker head culture and Hawaiian local culture. Narrator did a good enough job of representing each character. Kept my attention the entire time and wish there was more!

I'm from that Jordan era, I grew up watching the man, idolized him. His shoes literally started it all. You don't have a sneakerhead scene without him. I got my first job in high school just to buy his shoes. I see them as works of art. Yellowed soles and the old face boxes attract me. I may do the adulting thing now, but I am a sneakerhead at heart.

Jack, like most of us growing up in the Jordan era, had parents who weren't spending their hard earned money on a pair of Mike's he would outgrow way too soon. Mid-investigation he encounters a closet, full of his child hood favorites retro-ed, now he's got that itch to chase the new shoe box smell with his own hard earned money. What ensues is a paid trip to Hawaii to collect a bond, all while encountering the absolute rarest of air and rekindling that desire for shoes- dude's got it made. Jack Palms still has it, or is it the shoes?

Seth lists countless shoes in this book, and they are all legit, with one being slightly questionable. I found myself naming off the shoes and smiling while he described them, well before he finished with the make and model (I especially appreciate the eloquence used for the bred 11s). I really enjoyed the way the book was written in that the characters weren't all destined for proper English and quaint conversations. It had more of a street scene vibe to the conversations and language, and I know people who absolutely fit some of these characters perfect (excluding the meth bros lol), well played.

I'm unfamiliar with the Jack Palms books, and you don't need to be to enjoy this. I mean who isn't interested in a secret game Michael Jordan played in with some one of a kind fire on his feet?! OK, so not everyone; but the story itself really isn't bad. All shoes set aside, it was an enjoyable plot to follow along. There's a few twists along the way, just enough to keep you wondering how it will turn out. I'm not always a fan of the authors who narrate, but Seth did excellent in my opinion on both. The timelines used in the story are accurate, e.g. the shoes Mike wore in the game were the newest pair at that point in time. You get a little glimpse into today's world of sneakerheads who are absolutely wild over shoes. Any fan of a quick open/shut case would like this book.

I received a free copy of this audio book at my request in exchange for a fair and honest review.

I love this series! I actually enjoy everything this author writes! The narration was awesome. It will keep you entertained. The author does a great job with the characters and plot. I have read all the books in this series and enjoyed them as well. I look forward to reading more books from this author, I was given this free review copy audiobook at my request and have voluntarily left this review.

This clever, riveting, and satisfying read will keep you turning the pages from start to finish. I thoroughly enjoyed the characters, and the writing is funny with a lot of enjoyable literary references. There are some insightful elements of character development and the plot is super compelling. Who knew how interesting the world of sneakers could be!

Money, it’s all about the shoes

The Maltese Jordan’s combines action adventure with a passion for basketball and vintage sneakers. It’s a fun listen!

it’s everything you would expect from a Jack Palms. LOVED IT! Great story. Good performance.