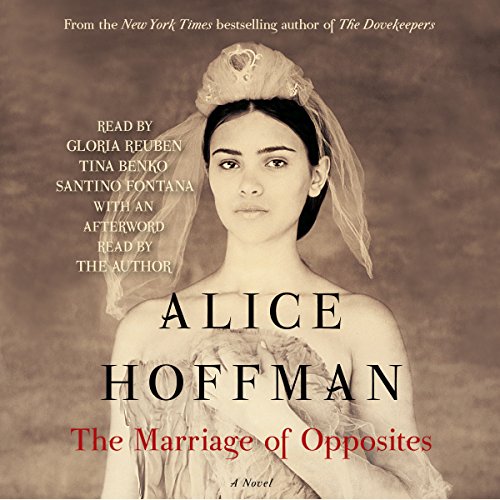 The Marriage of Opposites

From the New York Times best-selling author of The Dovekeepers and The Museum of Extraordinary Things: a forbidden love story set on the tropical island of St. Thomas about the extraordinary woman who gave birth to painter Camille Pissarro - the father of impressionism.

Growing up on idyllic St. Thomas in the early 1800s, Rachel dreams of life in faraway Paris. Rachel's mother, a pillar of their small refugee community of Jews who escaped the Inquisition, has never forgiven her daughter for being a difficult girl who refuses to live by the rules. Growing up, Rachel's salvation is their maid Adelle's belief in her strengths and her deep, lifelong friendship with Jestine, Adelle's daughter. But Rachel's life is not her own. She is married off to a widower with three children to save her father's business. When her husband dies suddenly and his handsome, much younger nephew, Frédérick, arrives from France to settle the estate, Rachel seizes her own life story, beginning a defiant, passionate love affair that sparks a scandal that affects all of her family, including her favorite son, who will become one of the greatest artists of France.

Building on the triumphs of The Dovekeepers and The Museum of Extraordinary Things, set in a world of almost unimaginable beauty, The Marriage of Opposites showcases the beloved, best-selling Alice Hoffman at the height of her considerable powers. Once forgotten to history, the marriage of Rachel and Frédérick is a story that is as unforgettable as it is remarkable.

"While each narrator's voice is distinctive, they share a common intensity, a complete immersion in the lyrical language that is a Hoffman specialty.... Even with such scope, this audiobook manages to capture the imagination and transport listeners to another time." (AudioFile)

This is by far the best book I’ve heard! The narration was perfection. Gloria Reuben’s voice was mesmerizing and drew me into the story like no voice before! A must “hear”!!

I liked everything about this audio book. Alice Hoffman is a masterful writer and the readers were perfect. I wouldn't have known about the book if it had not been a monthly selection for one of my book clubs. I love it when I encounter a book that is different from what I habitually read but is satisfying and thoroughly enjoyable. Only then do I realize what a rut I've been in.

Much as in The Dovekeepers, Hoffman's lyrical prose captures the lives of women and their families set in a world very different from our own. Here, the evocative tropical setting of Colonial St. Thomas in the Danish West Indies comes to life with lush description and mystical stories drawn from island lore. The wind, sea, skies, flowers, and birds take on magical qualities in a manner reminiscent of Marquez.
The central character is Rachel Pomie Petit Pissaro, who was the mother of Impressionist master, Camile Pissaro. The story spans three generations of her family and their struggle andconflict dealing with issues surrounding gender, race, religion, morality and ethics during the Colonial Era. Wonderful insight and new appreciation for Pissaro's gift are added benefits of this lovely book.

A little melodramatic. I kept wanting to give up on it but still found it compelling. Also couldn't they have found a narrator that didn't mangle French pronunciation given that the characters are French origins? Still the story was colorful and an interesting look at a time and place that I knew nothing about.

read! I bought this book before and returned it because I could not get into it. So, I bought it again by accident (the cover made me do it) and it’s one of my favourite books of all time!

Did not enjoy the readers tones. Too pretentious which distracted from the v rich story

This was more than a story, it was like being in a dream that you don't wish to awaken from. I was completely captivated by the story of this woman, her family, and the truths that I found to parallel those in my own life. As a woman in my fifties, with many children and grandchildren, I felt that I had found a kindred spirit in Rachel.
Alice Hoffman had been a treasured writer to me for years, and I hope that she will continue to bless us with her not inconsiderable efforts.

Would you listen to The Marriage of Opposites again? Why?

yes, but only because the story is so captivating

What other book might you compare The Marriage of Opposites to and why?

Who would you have cast as narrator instead of the narrators?

Anyone but the three narrators who deliver the book on this audio version. The book did not need three narrators, least of all these three, whose performances were dull and uninspired.
Do these audio books have producers? Do the producers actually audition the actors, or are the actors simply let loose with the text? This is a deeply moving, highly dramatic story totally ruined by three dull, un-distinctive voices. And by the way, why were they not coached in French pronunciation. "Une" is not pronounced "oon". And Petit is pronounced P'tee - not P'teet. And so on.

Who was the most memorable character of The Marriage of Opposites and why?

This beautifully rendered factionalized story of the artist Pisarro's mother, family and childhood was impossible to put down. Rich and evocative portrayal of life in St Thomas and Paris in the nineteenth century is full of love, loss, regret, secrets , magic , and colour. Highly recommended


Once in a while, rarely, I'll cross my fingers and pick up a book without knowing a thing about it other than it's an author I've read before. Ultimately I'm hoping to be a guest in their world enjoying a spontaneous adventure. So it was with Hoffman's latest book. I've liked, loved, and tolerated her work. I'm touchy with Magical Realism; I can only go along if it makes some sense, or if it's so out there it's enjoyable (Practical Magic). I love the girl-power but tolerate the martyrdom. Consistently though, Hoffman is a dynamic storyteller and writer that I find always worth the investment. Thus, I began listening to The Marriage of Opposites, off on a surprising journey.

Immediately I was caught up in an intoxicating dreamy, steamy world -- an overload of sensations; struck by a vivid tropical paradise saturated in color, myth and the promise of magic. Everywhere there is blue: the blue of the turtles' backs scurrying across the sand under the midnight moon, the blue of the cloudless sky, the changing blues of the ocean, the blue color of paint to keep away ghosts. The intoxication reminded me of a quote by Edith Sitwell ('43):
"We once had a lily here that bore 108 flowers on one stalk: it was photographed naturally for all the gardening papers. The bees came from miles and miles, and there were the most disgraceful Bacchanalian scenes: bees hardly able to find their way home."
This island too has bees that seem drunk on nectar. Hoffman also mixes in the fairy tales and local legends, of turtle girls, pelicans as protective spirits, falling leaves the spirits of dead loved ones. It is a carnival of light and magic, then curses and betrayals, Hoffman doing what she does so well.

The characters are just as rich and vibrant, an assortment of distinct personalities and histories. The plot is complex; tales of generations (Parisians, Islanders, Jews), secrets, religious and social standards, and taboos that affect every character as the story develops. I floated along absorbed in these people and their lives, the day to day on the island, but sensed an impending storm as their lives became more challenging, and the world closed in on the island paradise. It dawned on me slowly that this was an historical fiction, the story of Danish-French Impressionist, Camille Pissarro, and his mother, Rachel Pomié Petit Pizzarro. (And I minored in art history.)

And here the story suddenly shifted, a tectonic shift, and began to lag. This is also the point of contention in many of the reviews: the story loses its charm and becomes a lackluster story of one of our most important artists, in one of the most historical, romantic cities in the world--Paris. To further aggravate and confound readers, his once plucky mother, Rachel -- the same that introduced herself to us by saying she once defied every rule; the girl that skittered around the island like a rebellious island sprite; the woman with a lust for life that told fairy tales and carried the story until the disastrous boom, has a sudden, illogical, complete attitude flip-flop. Out of nowhere; she becomes the mother she always detested. Perhaps a bad mango, or did turtle-girl get her? Hoffman doesn't explain.

The mix of history in the fiction doesn't blend well; it really is a contrast of exuberance and dullness. But Hoffman hits it so hard in the beginning with such a great characters, setting, and story, that I found this to be one of my favorites in her line-up...at least before the *Gray Period.*

Because I was so enveloped and swept away, I have to highly recommend. I suggest to enjoy the brilliant first half, tolerate the second (it's not that bad), and if you really want to know about Pissarro read "Depths of Glory: A Biographical Novel of Camille Pissarro" by Irving Stone (the same author that gave us "Lust for Life" about Vincent Van Gogh, and "The Agony and the Ecstacy" about Michelangelo).

Second book I listened to back to back

What made the experience of listening to The Marriage of Opposites the most enjoyable?

My review reflects my thrill for tales of historical fiction. When listening I thought how restrictive daily life was for females in 1800's .Many challenges were the same that we face today ie caring/providing for children but there were few solutions for women on this island.


Have you listened to any of the narrators’s other performances before? How does this one compare?

The narrator's captured me. Their voices made me feel involved. I would want to listen to other books' they read. They kept my attention on every word. They voices and reflections were the reason I choose to listen again immediately after I finished.

This was my first book from Alice Hoffman and I purchased it read when their were only 7 reviews; a risk I normally do not take. I hope others will jump at the chance to listen to this most unusual book with it 's incredible imagery and spell binding vignettes .
Life was different then and yet very similar to what brings joy and sadness into one's life today!I am delighted I bought this!!