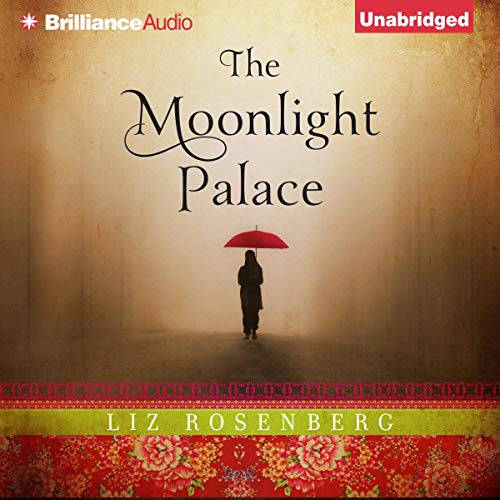 Agnes Hussein, descendant of the last sultan of Singapore and the last surviving member of her immediate family, has grown up among her eccentric relatives in the crumbling Kampong Glam palace, a once-opulent relic given to her family in exchange for handing over Singapore to the British.

Now Agnes is seventeen and her family has fallen into genteel poverty, surviving on her grandfather’s pension and the meager income they receive from a varied cast of boarders. As outside forces conspire to steal the palace out from under them, Agnes struggles to save her family and finds bravery, love, and loyalty in the most unexpected places. The Moonlight Palace is a coming-of-age tale rich with historical detail and unforgettable characters set against the backdrop of dazzling 1920s Singapore.

I loved this story of the heirs to the last sultan of Singapore and the palace Kampong Glam, which I knew nothing about until I listened to The Moonlight Palace. Impressionable Agnes, the 17 year old the last heir to the estate, is both naive and brave. Her telling of life in the palace and of both sets of grandparents (upstairs and downstairs) is touching, funny, and the substance of the woman she will become. Historical fiction at its best

I listened to the sample and was drawn in so completely, that I had to have the full audiobook. This was a "coming of age" story for a young woman who was the last of a formerly royal family in the Singapore of the 1920s. All the nuances of the multicultural mishmash of Singapore came shining through the story of this girl who was part Singapore Muslim, part Chinese, and part English. When the story opens, Agnes is 17 years old, in her final year of high school, and living with Great Uncle Chachi (Singaporean), English Grandfather, and Chinese Grandmother - who is known as Nei-Nei Down because she and English Grandfather live in the downstairs of the family's crumbling palace home.

The palace the family lives in is the source of the name of the book. The story revolves ostensibly around "how to keep the palace, and how to keep it livable", while really in my opinion it is the story of Agnes transitioning from impetuous school girl to competent young woman.

I wish I had a Nei-Nei like Nei-Nei Down, and a Great Uncle like Uncle Chachi, and a best friend like Agnes's best friend(s). This was an absolute jewel of a story, that had very little plot or purpose other than to follow Agnes on her journey through life in that last year between childhood and adult.

It was spectacularly narrated - the first I have heard with Amy McFadden - and it may have spoiled me for this narrator for she will forever be Agnes to my ears.

A lovely story with wonderful characters and a vivid sense of place, time and culture.

Great story and narration. Showed what life was like in the Lion City in the 1920s. As told through the perspective of a teenage girl, the main character, Agnes Hussein endured hardships along with the old members of her family but in the end they were given hope of a new life.

For so many years they clung to the old Moonlight Palace which symbolised their former status being descendants of a sultan. But times have changed and this is a story of surviving in the new Singapore.

Any reader who is fond of Singapore, its culture and history will surely enjoy the story.

It's a good story and sets up Singapore quite well, but I would've liked more family history, more history of Singapore and more character development

You can feel the ghostly palace crumble around you, as you feel more and more like another family member. I found myself entwined in the story, watching as Agnes struggles to become a 'modern' woman not wishing to alienate her beloved family. even the minor characters are fascinating and Singapore becomes a character too. I didn't realize how truly exquisite the Moonlight Palace is until I began writing this review.

I only got through the first few chapters of this book before giving up. The sample sounded like this book would be fun, but just goes to show that you cannot always tell by listening to the sample. Too bad 😔.

terrific loved it it kept yu in story time line

Would you try another book from Liz Rosenberg and/or Amy McFadden?

Amy McFadden did a decent job, although there were definitely "local" words where she was guessing pronunciation. I honestly got the feeling that Liz Rosenberg had never really been to Singapore, or really didn't understand how historical fiction shouldn't be written using a contemporary voice.

Has The Moonlight Palace turned you off from other books in this genre?

I love historical fiction- I had great hopes for this book as an expat living in Singapore. I thought I would learn something about this country's history, but this was a tale that could have been set anywhere. In terms of historical fiction, this was some of the worst of the genre.

Did Amy McFadden do a good job differentiating all the characters? How?

I wouldn't see this book as a movie- that being said, the book is almost written in hollywood style.

I was so disappointed in this book. I have lived in Singapore for a number of years and I LOVE historical fiction. I thought this would be the perfect combination for me. But it was a SLOG to get through this. The first chapter was the most interesting. It was the only really "historical" aspect of this book. Supposedly set in the 1920s, the main character's voice was entirely 2000's sassy. I sincerely question a lot of the history of this book- I honestly got the feel that the author had spent 2 days in Singapore and thought "that's a good idea for a story!". It is written more as a teenage romance than a historical fiction. I never usually write reviews, but I read so many positive reviews before buying this book that I felt I had to put in my opinion!

Not very good at holding my attention and my interest lagged in this lukewarm story.