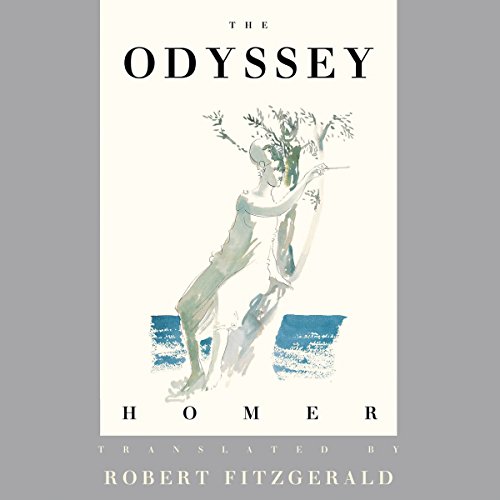 "In classical Greece men called rhapsodes memorized and recited 'The Iliad' and 'The Odyssey.' My own rhapsode is the English actor Dan Stevens, whom fans of 'Downton Abbey' will know as Matthew Crawley. He’s been performing the Robert Fitzgerald translation, and no Hellene could do it better." (Wall Street Journal)

Robert Fitzgerald's translation of The Odyssey has been the standard translation for more than three generations of students and poets. Macmillan Audio is delighted to publish the first ever audio edition of this classic work, the greatest of all epic poems. Fitzgerald's supple verse is ideally suited for audio, recounting the story of Odysseus' long journey back to his wife and home after the Trojan War. Homer's tale of love, adventure, food and drink, sensual pleasure, and mortal danger reaches the English-language listener in all its glory.

In keeping with the oral tradition of the time, Dan Stevens, whose many celebrated performances include Downton Abbey's Matthew Crawley, makes this epic tale come alive. The listener becomes totally immersed in the adventure and drama of the story - this is the way The Odyssey was meant to be experienced.

Also included on the program is a portion of the poem read in ancient Greek so that listeners may experience the lyricism and music of the original language.

Dan Stevens does it again!

Well done! Enjoyed Fitzgeralds translation and as usual, Dan Stevens does a marvelous job as narrator.

It's a classic for a reason

In university (I am a drop out) the Professor asked us all to get this transaltion and instead I got Fagle's. The teacher was right. This Odesey I will read again and again, plus by different translators for sure anyway. As someone from a Hinduism-lite background it reminds me in some ways of the Ramayana, but without my adolescent 'but who's the supreme diety?' personal anguish of reading Vedic scriptures.

I love hearing the decsription of dawn every time. Men kill, cry, get lost, distracted, abused and forebear up to a limit in this book.

Like The Iliad, the Odyssey is culturally, psychologically, and aesthetically fascinating, moving, and entertaining. Recently I re-read it by listening to two different audiobook versions: Fitzgerald's 1961 translation read by Dan Stevens and Robert Fagles' 1996 translation read by Ian McKellan. Both translations and readings are superb. I don't know Greek so I can't compare their accuracy, but their English is tight, dynamic, beautiful, and flexible. Here are two versions of a great short scene where Medon tries to explain to Penelope why her son went on a dangerous voyage:

(Fitzgerald)
“A god moved him--who knows?--or his own heart
sent him to learn, at Pylos, if his father
roams the wide world still, or what befell him.”

(Fagles)
“I don’t know if a god inspired your son
or the boy’s own impulse led him down to Pylos,
but he went to learn of his father’s journey home,
or whatever fate he’s met.”

Both versions capture the Homerian ambiguity about why we do what we do, but Fitzgerald does more compellingly in 28 words what Fagles does in 34, and I did find that Fitzgerald is usually more concise. Fagles tends to be more colloquial (catch my drift, cramping my style, etc.), while Fitzgerald uses unusual, "authentic" spellings of names with k for c etc. (Kyklops, Akhaians, Telemakhos, etc.). The above two translation examples are similar in meaning, but there are other places with greater differences, like when Odysseus blesses the royal house of the Phaeacians by saying he hopes they'll pass their riches down to their SONS in Fagles but to their CHILDREN in Fitzgerald, and I wonder which is closer to the original Greek.

As for the audiobook readings, both Dan Stevens and Ian McKellan are excellent, versatile actors with appealing voices and manners and great intelligence and empathy. Neither strains artificially for male or female or young or old characters. Both greatly enhance Homer's poem. I did find that, perhaps because of his greater age and experience, Ian McKellan revealed a wider and deeper range of emotion than Stevens. McKellan does a great Cyclops giving Odysseus a "gift," Circe enticing Odysseus to her bed, Menelaus predicting a blood wedding for the suitors, and so on. The 40-page "Postscript" by Fitzgerald is missing from his audiobook, while Fagles' informative 65-page introduction is missing from his. Anyway, I highly recommend both audiobooks of The Odyssey, which was after all originally meant to be listened to rather than read.

The first four books of the poem begin not with the beginning of Odysseus' epic ten-year effort to return home but in its last year, and concern not Odysseus but his son Telemachus, introducing the situation in Ithaca where for the last three years many reckless suitors have been hanging around the hero's wife Penelope in hopes that Odysseus will stay missing so one of them can marry her. Telemachus has been helplessly watching the greedy suitors devour his patrimony, until Athena decides to spark his maturing into a man by inspiring him to travel to his father's old Trojan War comrades to ask them what happened to his father. The next four books recount Odysseus' long longed for departure from the island (and bed) of the minor goddess Calypso and his arrival at the island of the Phaeacians, where, in the next four books he suspensefully narrates to his hosts his past adventures trying to return home after the Trojan War (encountering lotus eaters, sirens, Cyclops, wind gods, Circe, the House of the Dead, and more). The last half of the poem depicts Odysseus finally back in Ithaca, disguised by Athena as an old beggar, recruiting an ally or two, visiting his palace to assess the suitors and servants (and to suffer their affronts), and plotting some ultra-justice on the people who've been living without proper manners and morals.

The poem features many memorable fantastic and or emotional scenes. When Zeus complains about the tendency of foolish mortals to blame the gods for their troubles, when Athena prays to herself for a smooth journey, when Odysseus meets the shade of his mother ("like a shadow dissolving like a dream" in Fagles), when Odysseus treats Polyphemus to some wine and a sharpened stake (in an exuberantly gruesome scene), when Odysseus meets Nausica, when Odysseus tells Athena another fake autobiography ("You chameleon, bottomless bag of tricks," she calls him in Fitzgerald), when Telemachus sneezes at something Penelope says, when Penelope interviews a beggar, when Odysseus tests his sad old father, when the shade of Agamemnon happily hears the shade of a suitor recount what Odysseus has done to his fellows and him. And many more.

There are many interesting aspects of the poem, like the following:
--divine interference in our affairs may be explained by human nature or chance.
--Odysseus travels around sleeping with goddesses, while Penelope must stay chaste at home.
--Odysseus is willing to raid strangers in their homes but expects the people he visits to be friendly to strangers (and in a sense his treatment of the suitors resembles what monstrous hosts like Polyphemus and Hercules do to their guests).
--Odysseus metes out disproportionate violent justice, especially to a dozen slave girls and a disloyal goatherd.
--Homer addresses the loyal swineherd Eumaeus as "you."
--Homer really likes poets (especially blind ones).

Finally, such is the richness of the poem's characters and imagination and language (including the epic similes comparing, for example, Odysseus to things like an octopus dragged from its lair, children who feel relief after their father recovers from illness, and a sausage turned back and forth by a cook over a scorching blaze), that even though from the start Homer repeatedly foreshadows what will happen, it all manages to be suspenseful and entertaining every time one reads it.

This was my first experience with this classic and it was fantastic! can't wait to hear similar stories narrated by Dan Stevens. thoroughly enjoyable and highly recommended.

Oof, am I right? Beautiful. Plus it was nice to hear all the Greek names pronounced right.

The story's magnificent. It's feels like a battlecry to the listener. The story calls you to the life of adventure and glory. (That sounds flowery, but when you finish...!)

Dan Stevens' narration adds an entirely new dimension to The Odyssey--particularly its humor and humanity. If this is your first time through, the narrator masterfully sucks you into the story; if, however, you want to return to Ithaca, this is the way to travel!

Everything I said about Stevens' reading of The Iliad is true for this one, and then some. It's a nearly perfect marriage of translator and narrator. (Homer's not half bad either.)

The structure of The Odyssey is a wonder: multiple layers, multiple points of view, all of it flowing forth effortlessly.

Fitzgerald's translation of The Odyssey was my first contact with Homer. There are other translations that are more accurate, on a line by line basis; but few that throw off as many sparks of compact beauty.

It goes without saying that this greatest of poems is worthy of honor. The narration could not be better. I recommend highly, as well as the Iliad by the same translator and narrator.

All around loved it

The story itself is great. The narration was great and appreciate how it maintains the dactylic hexameter that the poem is supposed to be read. Will probably listen to it again in the future, maybe a few times.

Amazing for classes, wonderful audio, and great pronouncing. I wish I had the time to listen to it again!

I can't get over how well Dan Stevens brings this book to life. He effortlessly transitions between narrator and characters. He gives the different characters their own distinct mood with out turning them into cliches. I've read this translation a number of times but have never enjoyed it more than having it read to me.

The gods were clearly pleased

As was I. Engaging and captivating through each book from the first to the last.