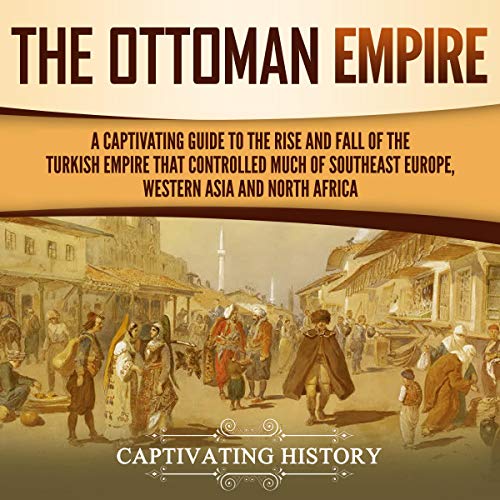 Explore the captivating history of the Ottoman Empire.

The Ottoman world was nothing like an exotic fairy tale featuring tyrant sultans, mean pashas, and ill-fated harem women. The true stories of genuine sultans and princes are a bit more complicated and no less exciting.

Incredible facts about this empire still surprise anyone who starts discovering those stories. You’ll find out that, for quite a while, this Islamic state was effectively ruled by women, and that’s just the beginning.

In The Ottoman Empire: A Captivating Guide to the Rise and Fall of the Turkish Empire and Its Control over Much of Southeast Europe, Western Asia, and North Africa, you will discover topics such as:

So listen to this audiobook now if you want to learn more about the Ottoman Empire!

Its mostly focused on the ruling family of the Empire and the intrigues with other family members. You would think in 800 years of the Ottoman Empire, the Osmans were the only people that lived in it. That itself wouldn't be too bad, but he just kind skims everything. Its like he wrote this book by copying Wikipedia.

I found this tough going. The performance was poor and the pronounciations were terrible. This period of history is so interesting, I hope there are better titles to listen to covering the Ottoman Empire.

The context with the first few sultans was pretty good, then the quality of content dropped off the radar, in my opinion. I was disappointed that there was little (if any) discussion about why they went to war, or how the empire related to the rest of Europe or the region, The last half of the book just seemed like a recitation of names and dates. I did not come away feeling like I had any insight into why the empire collapsed.

A bit off mark in my view.

The book is off mark from it's stated intent, the author wanted to center the book around, but ended up doing it and therein lies it's problem. Very much of an English account of the history, although exposing the emptiness of the policies and thought behind them from political as well as military men of the empire, the book fails to tell a complete story. Still a readable book, though one will have to read other sources.

An Illuminating piece of work.

Captivating History's work draws from a wide variety of sources, approaching the issues from different perspectives. It clearly exhibits the fact that, on the contrary to the ex-post official histories, the policies for greater Turkey had developed almost haphazardly. Much of his comments regarding T.E. Lawrance refers to Desmond Stewart's biography of the latter, thus should be taken with some reservation. An absolute must for individuals interested in contemporary world politics.

A must read to understand the history.

So comprehensive and understandable, this history of the origins of the Fall of the Turkish Empire of today should be read by everyone trying to make sense of the current situation in that region.

A Peace to End all Peace.

A must read for all in International Studies or in the military, but more important, a must read to those that give senseless opinions of what goes on in when the Turkish empire fell.

Understanding the Enigma of the Turkish Empire

This book explains it all. The Fall of the Turkish Empire and Its Control over Much of Southeast Europe, Western Asia, and North Africa is sorted out in easy steps, Artificial Country by Artificial Country. This division, each chapter dealing with one country for each of the half a dozen years makes for easy reference.

This is the best book I have read to date on the dynamics that marked the end of the Ottoman Empire and the construction of the modern Turkish, Professor Provence has added significant information to existing chronicles. He documents the role that the imperial powers played in shaping the "independent" countries of the former Ottoman provinces, showing that some of the current challenges that Syria and Iraq face in particular date back to this period. It is essential reading for anyone interested in both the period and the region.

A readable for history buffs.

Listening to it today fills in many of the gaps in our understanding of such events as the war in Syria. I recommend it highly for students, professors, and people simply trying to understand the modern Levant. Few history books are as lively and engaging to read - if one is genuinely interested in the topic. Another excellent book by Captivating History team.