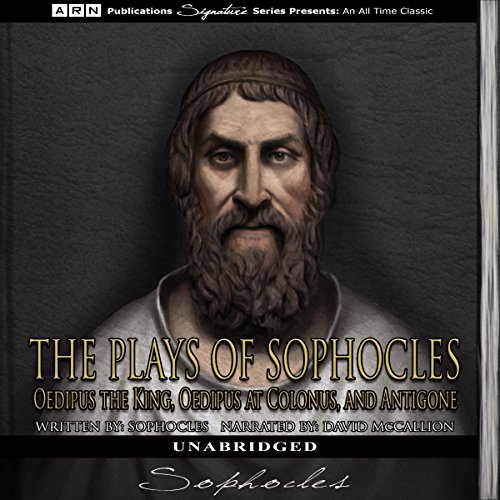 The Plays of Sophocles

Sophocles was born at Colonus, near Athens in about 496 BC and is considered to be one of the premier playwrights of Greek tragedy. His stories may have been filled with strife, but Sophocles himself was prosperous and came from a good family. It is said that he was handsome, wealthy, and a highly respected citizen of Athens. During his life, he wrote over 120 plays and was instrumental in how plays would eventually be performed, including the addition of stage props.

Sophocles' great Theban trilogy has all the intensity and power that you have come to expect from a Greek tragedy. Produced in colorful and poetic language, this is the story of a noble family catapulted into tragedy and loss of power, a story of pride, cursed with the stain of incest, murder, and suicide. Sophocles's plays are the pillars of ancient Greek drama and have been enthralling readers and theater goers since the fifth century.

This is worth listening to if...

This audiobook is worth listening to if 1) you won't otherwise read the plays (silently or out loud), or, 2) if you have read them already in recent history (enough to remember the gist of it), or 3) if you plan to sit and give it your undivided attention. I also recommend it as long as you are not bothered by this type of theatre-based narration (especially a male impersonating a female voice, which wasn't as bad as someone claimed IMHO). If you want to truly enjoy the story, however, plan to read it at some point, and as I've heard others suggest before, consider reading it outloud (as it was intended to be heard). I've never done that, but I can tell your from experience that at least reading certain parts helps comprehend the events, but you should be fine giving it your undivided attention as is. In fact, you can always read it while listening as well. If you're working while listening to it (even housework), however, you will probably get lost eventually and often unless you are a really good at multitasking.

Okay performance, but the translation is dated and was probably stilted when it was new.

do you hear the thunder of zeus calling?