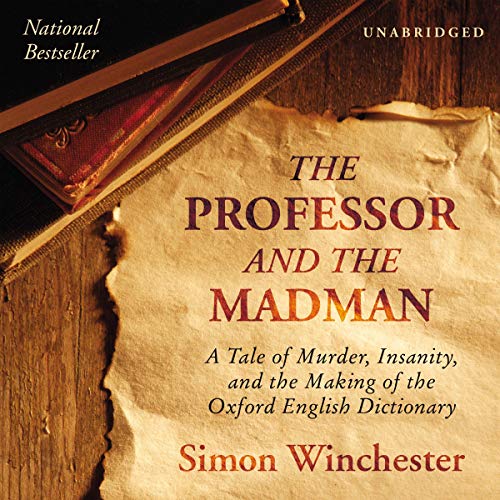 The Professor and the Madman

Hidden within the rituals of the creation of the Oxford English Dictionary is a fascinating mystery. Professor James Murray was the distinguished editor of the OED project. Dr. William Chester Minor, an American surgeon who had served in the Civil War, was one of the most prolific contributors to the dictionary, sending thousands of neat, hand-written quotations from his home. After numerous refusals from Minor to visit his home in Oxford, Murray set out to find him. It was then that Murray would finally learn the truth about Minor - that, in addition to being a masterly wordsmith, he was also an insane murderer locked up in Broadmoor, England's harshest asylum for criminal lunatics. The Professor and the Madman is the unforgettable story of the madness and genius that contributed to one of the greatest literary achievements in the history of English letters.
©1998 Simon Winchester (P)1999 HarperCollins Publishers Inc., All Rights Reserved, Harper Audio, A Division of HarperCollins Publishers
Historiques Art et littérature Littérature et fiction Grande-Bretagne
Voir plus Voir moins

As an artist, I often juggle the balance between torture and talent. This novel encapsulates it completely. It left me felling educated, humbled and appreciative.

Thumbs up from this word nerd! :-)

So happy to see books on this topic being offered - I thoroughly enjoyed this audio book. Simon Winchester told a fascinating story of murder and madness. He also highlighted the painstaking efforts sustained for over half a century that were involved in the creation of the English Oxford Dictionary. Simon Winchester’s voice is pleasing and easy to listen to. A great audio book all around. Thanks so much!

I finished this book months ago, but it feels like yesterday... the story is that memorable. If you think you have an idea how the original dictionaries were created, think again. This book will blow your mind. It does move a bit slow at times, but I could put up with it, given the surprises that it contains. There are lovely word interludes, giving insight to how the definitions of certain words were created. And, yes, there IS a madman at the centre of the story.

best yet thank you simon Winchester

Simon Winchester presents us with an amazing story about a piece of history that I would have never considered interesting or significant. The accomplishment of the combined efforts of the two main characters Minor & Murray added to scores of other volunteers is one if not the greatest achievement in the history of the English language.

The story is presented in a very logical yet unassuming manner, and maybe the perfect example of an audible book selection. The narrators voice is crisp, clear, and expressive.

Listen, enjoy, and recommend to a friend.

You may be thinking, "How good can a book about the writing of the Oxford English Dictionary really be?" The answer is, amazing! Far from dull or boring, this historical work has the edge-of-your-seat feel of a psychological thriller.

This is the story of two very different men who come together to help create the Oxford English Dictionary. Editor James Murray has a revolutionary idea: call upon volunteers to help build the massive collection of words. One volunteer stands out among the others for the quality and quantity of his submissions. This volunteer is Dr. William Chester Minor, an inmate at an institution for the criminally insane. Through their shared passion for the dictionary, the men form a friendship that transcends Minor's past, his insantiy and even the dictionary itself.

What I love about this book is its message of hope. Even for a person locked away in a mental institution, life can have purpose and meaning. Lifelong friendships can be formed. I admired Murray for his ability to see beyond Minor's past and present. I related to Minor for the tenacious way he clung to the dictionary, allowing it to become a life preserver keeping him afloat in the dark waters of his insanity.

Enhancing the experience of this book is the fact that it is narrated by the author, Simon Winchester. Winchester knows his material better than any other reader could, and he delivers it with heart and feeling.

ADDED BONUS: At the end of the book you are treated to an interview with Mr. Winchester, who talks about Murray, Minor, their friendship and the writing of the Oxford English Dictionary.

This listening experience is not to be missed!

The Good – While I cannot say a book such as this is great, I can say this book is genuinely very good. Hence, four of five stars overall. This book sat lingering in my wish list for months while I poured through numerous books about various historical, scientific and other nonfiction topics. Then, I took another listen to the sample after being frustrated by a previous book. I was yearning to some learning and this seemed like it would do the job. It did. I finished this book in just over a day and a half. I did not want to put it down.

The Not So Good – It was too short for me although I’m not sure what could or should have been added. So that’s simply me being querulous. I’m also not a big fan of the author interview at the end of the book, but I’ve never been a fan of author interviews in any regard so that is admittedly a biased opinion.

The Bad – Nothing \ pronoun \ not anything; no single thing; \ they found nothing wrong

The Narration – Sublime \ adjective \ of such excellence, grandeur, or beauty as to inspire great admiration or awe.

The Overall - I truly enjoyed this book and didn’t want it to end. I learned many things, but most importantly I gained a new appreciation for the English language and how the original internet worked; paper, pen, envelope, post. We live in such an instant society today that this book made me appreciate the written word again. An ironic epiphany given that I’m listening so I can multitask which I cannot do when I read. If you’re a hardcore book reader/listener or you love learning new things, you need this book in your library. I’m off to try another book by Simon Winchester and to purchase a hardcopy of the OED and stop using Google for word definitions.

I first heard of this from C-Span Book TV, and very much enjoyed it. Especially as an audio book because of the authors narration. Mr Winchester has a wonderful english accent. It's a compelling story that he is obviously fond of. Not only is it an interesting true story from Victorian England, it's like finding a memoir in an favorite aunts attic. The payoff is the interview Winchester has with the current editor of the O.E.D. at the end. I've replayed it several times.

This is a terrific story with a great narration by the author. If you are a history, mystery or non-fiction buff, you will find this book first rate. I'm off to check out the rest of his titles. I hope they are on par with this one.

Probably the best way to read this book

Who would have thought that the writing of a dictionary could be so interesting?

Winchester takes the reader on a journey through many parallel histories-the history of dictionaries, the American Civil War, the history of some poor neighborhoods in London, and the story of three men who could easily have been forgotten. Murray, Minor, and Merrett (I think we can all be forgiven for getting them mixed up a couple of times while reading this) are each treated as interesting characters in this book, with their life stories explained. The author also puts to rest of the apocryphal tales that sprung up over this incident, including the story that opens his book.
The author also does an excellent job of remind the reader several times that, while a great debt is to be paid Minor for all his work on the dictionary, it came at the cost of a man's life.

This is a well-written book, scholarly without being pedantic. The author is the narrator and makes it a really interesting journey to join the author on. Provided the reader enjoys 19th century history, a British tone, and dictionaries, this is an enjoyable read. If any of those don't pique your interest, you'll wonder why anyone would bother reading past chapter 4.

Simon Winchester is delightful and engaging, intelligent and insightful. This is a wonderful read (listen). I loved his understated irony and his many flashes of brilliant insight into human nature and history, not to mention attention to detail without being pedantic at all. Winchester brings a surprisingly spiritual point of view to this surprising and touching story. The only disappointment is the interview with the current editor of the OED who shows himself a bore- far outclassed by Winchester's nuance.

**some spoilers ahead**
It's a rather flimsy, but thoroughly enjoyable little incursion into the story of William Chester Minor, one of the most important contributors to the Oxford English Dictionary. The relevant arc starts with him as a surgeon in the Union Army and ends with his death back in the States.
I call it flimsy because it's only interesting or important in the sense that we all like to pry into the hidden lives of celebrities, and this touches that exact chord.
It is, nevertheless, fascinating. Minor served during the Civil War and, the theory goes, had a crucial moment when he was forced to brand an Irish deserter. We don't know that this is what caused his sexual obsessions (wouldn't it be weird if it did), but it was almost certainly what caused his belief that Irish men were constantly after him, invading his room at night and performing strange rituals on him. Increasingly erratic, sexually obsessed and paranoid, he was admitted to a lunatic asylum, which - as happened more often than not in those days - did nothing to cure or improve his condition. He left for England, where, one might almost say "in due course", he shot a man and was then incarcerated, in a modern move, at the Broadmoor asylum. And here he was to stay for over 30 years, settling into very comfortable quarters and carrying on with the exact same paranoid delusions about Irish men springing up from the floorboards at night and taking him to various brothels where he was forced to perform shameful sexual acts on girls. Nighttime delusions notwithstanding, he also managed to accumulate an impressive collection of books and contribute a huge number of entries and quotations to the OED, while at some point also cutting off his penis to punish himself for compulsive masturbation.
The book is also interesting in its tangential details about Broadmoor and the making of the OED. All in all, as I said, flimsy but interesting.

I really loved this book, and listening to simon winchester read it. I particularly liked the way he melded together the stories of the main character and his compassion and understanding for Dr. Miser. Besides being a fascinating history of the OED, which is even laugh out loud funny at some points, the book is an interesting, thoughtful exporation of the joys of a meaningful life and why purpose matters. I highly recommend.

or How I Spent My Summer(s) in the Asylum

A book about encyclopaedia and words is interesting? Actually, quite. The foibles we encounter in humanity color the texture of our society, morality, education and social progress. Believe it or not, an example of this is richly portrayed in The Professor and the Madman. A truly engaging piece of work, well researched and delivered with wit and grace. I only rated this a 3-4 because I have happened to listen to some truly remarkable books recently so I've tightened up my ratings all around. Nonetheless, highly recommended (I went out and bought the hardcover book as well).