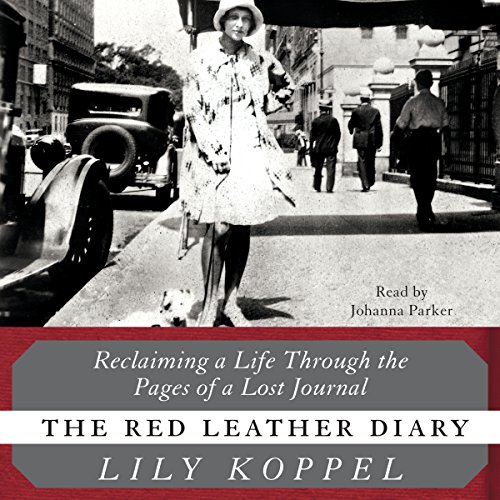 The Red Leather Diary: Reclaiming a Life Through the Pages of a Lost Journal

For more than half a century, the red leather diary languished inside a steamer trunk. Rescued from a Dumpster on Manhattan's Upper West Side, it found its way to Lily Koppel, a young writer, who opened its tarnished brass lock and journeyed into an enthralling past. The diary painted a breathtaking portrait of a bygone New York' "of glamorous nights at El Morocco and elegant teas at Schrafft's during the 1920s and '30s'' - and of the headstrong, endearing teenager who filled its pages with her hopes, heartaches, and vivid recollections. Intrigued, Koppel followed her only clue, a frontispiece inscription, to its now 90-year-old owner, Florence Wolfson, and was enchanted as Florence, reunited with her diary, rediscovered a lost younger self burning with artistic fervor.

Joining intimate interviews with original diary entries, The Red Leather Diary re-creates the romance and promise of a remarkable era and brings to life the true story of a daring, precocious young dreamer.

Ce que les auditeurs disent de The Red Leather Diary: Reclaiming a Life Through the Pages of a Lost Journal

A great story from a great find in a steamer trunk!

I came across this title when I finished The Astronaut Wives Club by Lily Koppel. I liked her writing and wanted to read more. This one immediately appealed to me due to the diary aspect. I'm a genealogist and always wish I could put a human life with the written facts - birthdate, death date, etc. What a wonderful gift to find the diary's writer still living vibrantly! In my late teens, I burned my own adolescent 5 yr diary, and the journals we had to keep in high school journalism class. How I wish I had those today... but alas, back then, I didn't want anyone to know my innermost thoughts and feelings. I'm sure they would be quite laughable now.
I thoroughly enjoyed this book and when I found it on Audible, I listened/reread it again!
Thought: How will I feel and reflect back on my life when I am 90? Will I have lived the life I imagined? How about you?