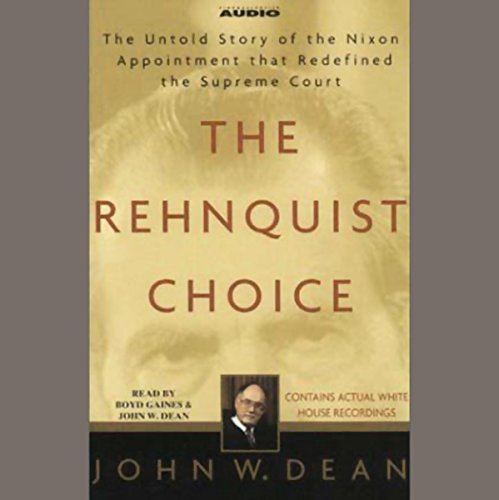 In the fall of 1971, when William Rehnquist was nominated to fill an Associate Justice seat on the Supreme Court, the Senate raised no major objections, and a little-known Assistant Attorney General found himself at the pinnacle of the judiciary.

It seemed a straightforward choice of a relatively young, academically outstanding and politically seasoned lawyer who shared Richard Nixon's philosophy of "strict constructionism." As Nixon's White House Counsel, John Dean reveals for the first time that the choice was anything but straightforward. The truth is that Rehnquist's nomination was the result of a dramatic, Nixonian roller coaster. Rehnquist was a last-minute longshot who had once been dismissed by Nixon as a "clown." Only John Dean - Rehnquist's champion at the time - knows the full, improbable story.

Dean's gripping tale is loaded with revelations, such as Nixon's plan to pack the court by forcing resignations - before his inauguration.

The Rehnquist Choice fills in a long-missing explanation of the making of the man who wrote the majority opinion in Bush v. Gore and presided over the impeachment trial of William Jefferson Clinton.

With the release of the Nixon Tapes more books are coming out based on new information revealed in the tapes. This book is one of those books. The book is based on 420 hours of the recently released tapes that cover the 34 days in 1971 when Nixon filled two Supreme Court vacancies. Dean used the Tapes, his own papers from when he was Nixon’s White House Counsel, and documents from the National Archives. I never thought I would be listening to the famous Nixon Tapes.

Apparently Nixon considered 36 candidates to fill the positions vacated by retiring Justices Hugo Black and John Marshall Harlan. Dean states that Nixon’s goal was to slow down integration and move the Court to the right. When Rehnquist was being considered Nixon was told “Rehnquist made his Arizona mentor Barry Goldwater look like a liberal.” I cannot believe that Nixon considered nominating Senator Bird to the Court; he was even a Democrat not a Republican besides being a form KKK member.

Dean reveals the “vetting” process used by the Nixon White House and Justice Department to select nominees to the Court. The book is well written and easy to follow with lots of quotes from the tapes to give reader the feeling they are sitting in the White House alongside Nixon. The book is short at six hours. During Nixon’s Presidency he appointed four men to the Supreme Court: William Rehnquist, Lewis Powell Jr., Harry Blackmum and he appointed Warren E. Burger as Chief Justice. Boyd Gaines does a good job narrating the book.

This is a title that falls into the above category. I found it fascinating, but it has a very limited audience; probably those interested in law, politics and the Nixon administration, or some combination of these matters. As is usual, Dean has thoroughly researched the topic and has not relied upon his own first hand knowledge. In this regard, the device of having Dean read the passages that are his own reflections is a very useful and appropriate one.
As for the rest of the production, Boyd Gaines was a more than competent reader who captured the characters. If anything, his reading was more consumable than the actual recordings from the Nixon White House, the latter being very difficult to understand. This difficulty only increased my admiration for Dean's diligence in sorting through all of the available tapes for the purpose of The Nixon Defence (see my earlier review).
If you don't fall into the above categories, I think you could safely give this title the miss. If you fall into one or more of them, then I think you'll find this as interesting as I did.

Here is a fly-on-the-wall, blow-by-blow of the Nixon and his team in action. Richard Nixon is a boundless case study, this eternally snarky, coarse, calculating poker player. Everything and everyone is another card to "play." Here are the ethnic and gender slurs, perhaps an echo of the onetime supply officer in the WW2 Pacific playing cards with his buddies, with a layer of ever-calculating scrappy lawyer on top. At moments, he literally growls and snarls. A terrific editing job has been done, moving seamlessly between the various players. Yes, I take anyone's self-justifying narrative with a huge grain of salt, and that includes John Dean's, and the later book makes me wince at moments. But that does not spoil the piece, because so much of its content is so well documented (and even includes tapes of the actual conversations). I think it's time for me to rummage through some more of these Nixon "straight up" audios.
I see another sub-plot here too, quite pertinent to today's evaporating privacy issues for politicians as well as everyone else. Nixon I believe anticipated his oval office tapes would be confidentially his alone, to vet and filter out at his leisure for the historical record. The press has always served the legitimate interest in widely disclosing matters of public news interest (of course alongside its profit motives). Nixon for his part was obsessed with the press and that dynamic -- and they were going for the jugular with him, and all kinds of people were leaking supposedly private information. This, mixed with his personality, brought us Watergate. But he was not completely unhinged -- his frustrations had serious elements for us to ponder. The public cannot demand every utterance of every government official at the moment it is made. But in our everything-networked world, are we losing something, with microphones everywhere, document retention rules? Can any of us function in a high pressure situation where we are every moment presumably speaking to eternal history as represented by an army of adversaries over long periods analyzing and parsing every word? This has been an issue not only for Nixon but for both Clintons. Political opponents on either side are quick to make hay from these things, but they should reflect that they live in glass houses themselves, in terms of a world that watches every event and never forgets. It is not new, but its intensity and these particular dynamics are recent. And much of this started here, as we can hear and consider. Our civilization is maturing through this tech revolution, and some will find themselves in a glare unimagined.
As a last remark: if judicial matters are of little interest to you, you might be bored. This is certainly not as "juicy" as secret bombing programs and such. But for me, it is rich.

Insightful look at Nixon and the Court

As far as audiobooks go, The Rehnquist Choice does well at providing insight into the politics and maneuvering that shaped the Court from the 70s to the present. Well written and read, it does not fall into boring recapitulation and tedious details. It provides nuances and insight that only someone from the inside can bring. While no one formerly on the inside is completely ojbective, John Dean does well to balance his subjective position with the facts of his involvement.

Many of the excerpts from the Nixon tapes are garbled and hard to understand. It would have been better to have the narrator just read the text.

John Dean is delidiode.
I loved it. The best part kept on coming up. If you like Nixon, or wanna find out why he is da king, den dis book is for ye.