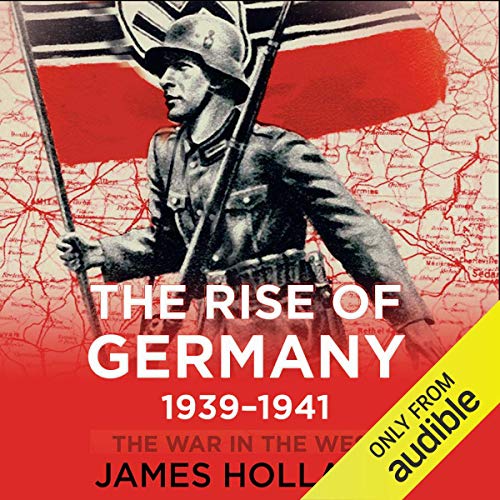 For seven decades, our understanding of World War II has been shaped by a standard narrative built on conventional wisdom, propaganda, the dramatic but narrow experiences of soldiers on the ground, and an early generation of historians. For his new history, James Holland has spent over 12 years unearthing new research, recording original testimony, and visiting battlefields and archives that have never before been so accessible.

In The Rise of Germany, the first of a major new three-part history of World War II in the West, he weaves together the experiences of dozens of individuals, from civilians and infantrymen to line officers, military strategists, diplomats, and heads of state, as well as war strategy, tactics, and the economic, political, and social aspects of the war to create a captivating audiobook that redefines and enhances our understanding of one of the most significant conflicts in history.

Beginning with the lead-up to the outbreak of war in 1939 and ending in 1941 on the eve of Operation Barbarossa, the Nazi invasion of Russia, The Rise of Germany is a masterful history of the war on land, in the air, and at sea, destined to generate significant scholarly debate and listener interest.

I was fascinated by the content but just couldn't take the reader . His pronunciation of foreign names and place was more than I could endure

Where does The Rise of Germany, 1939-1941 rank among all the audiobooks you’ve listened to so far?

The reader reviews really had me worried until I listened and realized he had put great effort in to getting all of the French, German and even English pronunciation accurate. We are so used to lazy anglicized versions that the correct pronunciation does seem somewhat jarring, but after a short while it really adds to the authenticity.

I have read all of the classic WW II books from Churchill to Shirer but none of them capture the personal accounts or the macro economics of the war the way this book does. I thought the publisher was making outlandish claims when they promised a new perspective, but I think the book actually lived up to this. I am now waiting eagerly for the second book.

Interesting enough but the narrator sounds like he is going to war!

If the author wants this to be an audio best seller he has to get s narrator that is not racing through the story. It was difficult following events as the narrator was hard to follow.
The book itself is a rehashing of events told in many other books; but still interesting.

The logistics of war

One modern day general said that “arm chair” generals speak of strategy while real generals worry about supply and logistics and that is one of the things this book discusses in detail - how the logistics of war affect the fighting war. I have read many books on World War II but none of them ever paid anything more than lip service to the constraints imposed on war strategy by the need for proper supplies, maintenance and repairs, while that is perhaps the main thrust of this book.

Why did the Allies only use Sherman tanks later in the war? Because it simplified the need for supply, training, maintenance and repair. What affect did the quality of the German soldier’s “kit” have on the German war effort? You will find the answer in this book. How about the Allies’ need to standardize rifle bullet calibers? Again, read this book. While this book covers the basics of the war itself, its main concern is the steps taken by the Allies to standardize as much as could be standardized between the Allies to make the task of resupply and repair as easy as possible.

I personally found the book very interesting but also found it a bit jarring to come across a large number of “British-isms”, many of which I had not heard before. The author and the narrator are British so this should not be a surprise and common British terms such as “spot on”, “put paid to” and “done for” were not a surprise, but I had to check on the exact meaning of terms like “teeth sucking”, “getting up the noses” and “keen as mustard”. Added to that I found the narrator’s voice and pronunciation to be a bit difficult. I suppose the British, living a lot closer to Europe than Americans, tend to try to be more accurate in their pronunciation of non-English words and that is certainly true for this narrator. Still, after listening a bit I found the odd, but properly proper, pronunciations to lend a more accurate feeling to the book and to be a net positive rather than a negative.

This is far from being either the most interesting or most informative book I have read on the European Theater of World War II, but it has the advantage of tacking an issue that I have never seen handled properly before and that certainly added to my interest in this book. I found myself torn between giving the book 5 stars for being the only book I have read that treated the logistics of the war as being important and 4 stars as it simultaneously disregarded other important aspects of the war. In the end I decided on 4 stars as I felt that this book did not have either the same interest or immediacy as some of the truly great books on the European Theater of World War II. Still, I recommend it for anyone really interested in how the various armies struggled to fight during the initial part of the war. I am looking forward to the second volume.

I'm glad I ignored some of the other reviews. I personally thought it was well-written and well performed. I would recommend this book to anyone interested in the events between 1939 and 1941.

Great view of the events.

Loved the research. I have read others on the subject the point of view was refreshing different.

I should have paid attention to the other reviews

The earlier reviews were right. The narration of this book makes it an unpleasant experience. I have problems with the book itself, but the narration is so off that I can't give the book a fair chance.

The narrator actually has a decent speaking voice. I might be able to listen to him in another book. But in this book he affects a dramatic style that is distracting at best, and a joke at worst. But the real problem is the way he pronounces non-English nouns. He gives personal names and place names their FULL original-language pronunciation. He gives each German name the full guttural flourish. The French names come out sounding more French than French. It's all too much. I tried hard to tell myself that the narrator was being precisely accurate with his words; that he was being true to natural language. But he comes across like an pretentious high school teacher, and after a while, you just want to walk out of class.

But even bad narration wouldn't doom a solid book. But I don't think this book is solid. I listened to 2 hours, and what I was hearing sounded disjointed and jumpy. I didn't see a strong narrative taking shape. The author jumped from one subject, to another theme, to another personality, and it all felt out of sequence and unfinished when the author jumped to something else.

Another technique that I see way too much of in modern histories: The constant jumping back to personal vignettes as a way of grounding or personalizing the story. I've seen this in plenty of books lately, so it's hard to blame James Holland for this trend. But just when this book picks up any kind of steam at all, we're immediately dumped back into the personal narrative of a bus driver or a mid-level soldier or the wife of a general. It has the feel of dumbing things down, as if the author is afraid that eight pages of historical information is too much for modern audiences, and the only way to keep readers around is to keep returning to the memoir-within-the-book. Ugh.

I'm so used to listening to Will Durant, William Manchester, and Robert Caro, I suppose I've developed ridiculously high standards in historical writing, but James Holland just doesn't cut it right now for me. As for the narrator, maybe he was misled by horrible direction... Or maybe he's just bad.

James Holland sheds new light on a subject that many may believe has been covered to the point of exhaustion!! From his re-examination of the myth of Wehrmacht mechanization and “blitzkrieg” to his in depth look at the nuts and bolts operational level of the war.

Paul Boehmer does a magnificent job narrating! Right down to spot on pronunciations of names and technical terminology along with various accents that, along with tone help keep a 28hr book alive and interesting!

Looking forward to volumes 2 and 3 of this series!!

If there was an option to give the performance negative stars, I would do it.

The narrator should be chained to a wall, kept awake for weeks on end, and forced to listen to his narration until he cracks, and collapses into a blubbering heap of broken humanity. Seriously. Where do they find these "performers"? Do they just walk down the street, choosing people at random? Christ...nothing like wasting your money on a decent book, rendered unlistenable by an utterly incompetent narrator. Do yourself a favor, read the book.

Kept my interest all the way through

I really appreciated how Holland emphasizes aspects about the war that are often ignored, such as logistics and industrial output. He doesn’t set out to show how powerful Germany was compared to a weak France, but instead reveals the opposite: France was still one of the most powerful industrialized nations in the world by 1940, and Germany’s apparent mechanization was only still developing. German victory over Poland, Norway, France, and Greece was indeed swift, but it came at a tremendous cost of lives and machines and relied on near reckless risk-taking.
Some people said they couldn’t stand the narrator, but I thought he was fine. I definitely will be listening to more James Holland books.