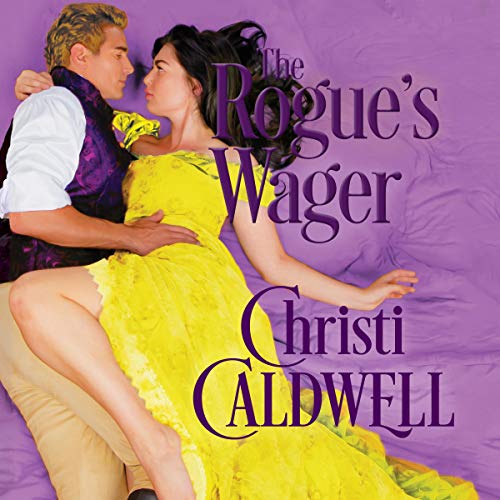 Lord Robert Dennington, the Marquess of Westfield, has long reveled in the freedom afforded him as the ducal heir. He knows he must someday do right by the Somerset line, but he's in no hurry to give up his carefree existence.

Helena Banbury is a bookkeeper in a gentleman's gambling club, adept at analyzing numbers and accounts but helpless for lack of influence. She's never belonged among the nobility on the gaming hell floors, but neither does she feel completely herself among the men who run the Hell and Sin Club, despite the fact that they are family. The once-illiterate girl from the streets wants more than the gilded walls her protective cage can offer.

When Robert mistakenly enters her chambers one night, Helena is forced out of her predictable life and thrust into the glittering world of Society. Will the charms of the marquess prove more perilous than any danger she ever knew on the streets?

This was a good story. I always like a story where there is a gaming hell. I do wish there was more of the gaming establishment in the story. It would have add a little more intrigue to the story. It's okay the story was still good and entertaining.

I liked Helena a lot. Love a mathematician heroine. And the soon to be Duke, Marquess of Dennington was great, loved him. These two had some good chemistry together and nicely written sex scene too.

The story line and plot was good. A little mystery and a villain or two is always good. There was lots of dialogue throughout the entire book.

As for the narration it was good. I do like Tim Campbell almost always. He does a good job on the female voices and gives everyone their own distinct voice. He has a nice reading voice.

It just went on and on with the self deprecating thoughts of the characters. Revelations to the listeners never made it to the actual characters.

Tim Campbell swept me along and kept me mesmerized by the words and story of The Rogue's Wager. His reading voice was perfect. Two people with very good reasons to not trust. Obstacles. Loving fathers. A wicked duchess. Home found.

This story is so compellingly beautiful that I have listened all day. Tim Campbell does a wonderful job of making us feel the emotional content to the point of occasionally crying or laughing throughout Christi Caldwell's absolutely addictive story.

The narrator's voice was easy on the ears. The story however was repetitive in the descriptions of the main characters: height and age. Yes, he's 33 and I got it, she's nearly 25. There could be more character development. Those words spent through out the story REPEATING their ages, the brother's hate towards the ton, and the heroine not being traditionally beautiful could have instead been used for character development. Why is referencing their ages important, the hate, and the notions of beauty? Still a decent story for audio but probably not to spend your day reading.

A nice complex story with a HEA ending.

Great characters, and many plot twists that do make sense. Of course an initial difficult journey for the couple to find each other, and more fascinating twists and turns. Ultimately, a HEA ending.

This was a good listen by Christi Caldwell. The narrator was perfect was this HR listen. Worth the credit.

the story is terrible. I love romance but not this. the narrator could not have fixed this story but at times I could not tell if it was a man or a woman

Wonderful uplifting historical romance with a bit of action and suspense! Great character development and plot twists that keep you reading until the ends.

I really liked it! Really good story and A+ for the performer's enthusiasm ⭐ can't wait to hear the next book, in love with Ryker already ♡