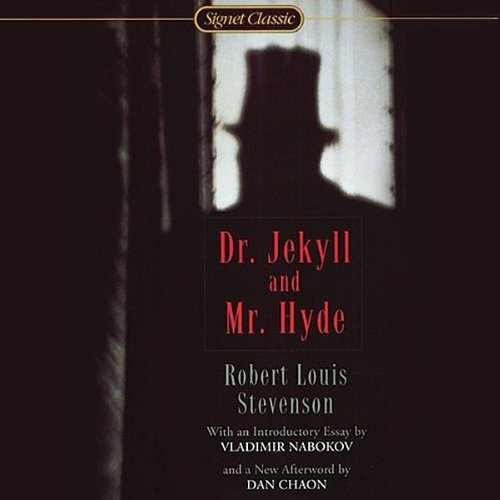 The Strange Case of Dr. Jekyll and Mr. Hyde

This is the disturbing tale of the dual personality of Dr. Jekyll, a physician. A generous and philanthropic man, he is preoccupied with the problems of good and evil, and with the possibility of separating them into distinct personalities. He develops a drug that transforms him into the demonic Mr. Hyde, in whose person he exhausts all the latent evil in his nature. He also creates an antidote that will restore him to his respectable existence as Dr. Jekyll. Gradually, however, the unmitigated evil of his darker self predominates until finally he performs an atrocious murder. His saner self determines to curtail these alternations of personality, but he discovers that he is losing control over his transformations and that he slips with increasing frequency into the world of evil. Finally, unable to procure one of the ingredients for the mixture of redemption, and on the verge of being discovered, he commits suicide.

Stark, skillfully woven, this fascinating novel explores the curious turnings of human character through the strange case of Dr. Jekyll, a kindly scientist who by night takes on his stunted, evil self, Mr. Hyde. Anticipating modern psychology, The Strange Case of Dr. Jekyll and Mr. Hyde is a brilliantly original study of man's dual nature as well as an immortal tale of suspense and terror.

This tale has lost none of its ability to shock. Its realistic police-style narrative chillingly relates Dr. Jekyll’s desperation as Hyde gains control of his soul - and gives voice to our own fears of the violence and evil within us.

“The theme of human duality…is nowhere presented with more force and originality….[T]he story reveals Stevenson’s understanding of human nature and his mastery of English prose.” ( Masterpieces of World Literature)

Jarvis Brings the Fullly to Life!

It was great to finally experience this book...and even better to experience it through the voice of Martin Jarvis. So good was his handling of Stevenson's chilling classic that I downloaded others by him just to hear his narration, again ("Good Omens" - also excellent!). If you have not read "The Strange Case of Dr. Jekyll and Mr. Hyde, listen to this version and you'll understand why it has endured for well over a century. #Audible1

An overall a worthwhile experience. Very good performance! A classic piece well delivered by an expert.

I barely remembered the details of this classic, so took the time to listen to it anew. A good performance.

Great classic story truly Brough to life by the narrator deffitnely well worth the listen!

The performance was amazing on how you can feel the different voices and how they would look. For the story well it’s quick and amazing this is one of the best books I’ve listened too.

Excellent reading of a timeless classic.

Very well read with feeling and authenticity. This story is a timeless commentary on the apparent duality of man's nature and the struggle to find his true identity or continue to live as an imposter.
Robert Louis Stephenson plums the depths of that nature's inner workings and strivings with good and evil in a way that is well worth listening to.
One of the best.

The best one yet

This really is the best audiobook version of this story available on Audible. Martin Jarvis does a stellar job. Near the end, hearing Dr Lanyon's letter, I felt like I was in the room with him, receiving the same shock to my system.

The story has an unusual structure, completely unlike any of the film versions. Nowadays everybody knows the big secret, that Jekyll and Hyde are actually the same person; but the first readers didn't know that, and Stevenson peels the onion slowly, with excruciating tension. For the first time, listening to this version, I was able to capture some of that first-time excitement.

Martin Jarvis doesn't just read this novel, he performs it, and is as good in this role as Jeremy Brett was as Sherlock Holmes. Although I've seen, heard, or read countless versions of this classic story, this faithful audio version, coupled with Jarvis' pitch-perfect narration, effectively draws you into the story and maintains suspense right up to the final scenes.

I've said it many times, "working with him is like working with Dr. Jekyll and Mr. Hyde"... but had never read the classic it comes from to see if I am aptly spouting. It is a short, easy read that I found interesting and was pleased to finally know exactly what I was talking about. A little bit of morality pondering can be done if you choose or leave it to the Lawyer as he figures it out. Glad I read it and did a little bit of pondering of which side of me I am feeding.

I think the main reason i gave this a four star was mainly because of the age.

I've never heard such an original story in such a way as this. Nor one that uses such complex descriptions and vocabulary, that I actually enjoyed.

This audiobook explore Science and Man's nature. It is worth a second listening, specifically in relation to the idea that evil is pleasurable.

What was one of the most memorable moments of The Strange Case of Dr. Jekyll and Mr. Hyde?

The use of the epistolary narrative at the end answers the questions the reader will have asked and provides a more interesting debate.

Good, classic and sometimes lulls one to sleep.

A classic mystery that challenges the progression of Science from a social and historical context, as well as man's true nature.

Very different than any movie of the subject I've ever seen...but as this is usually the case when it comes to book vs movie I was not surprised. The book was quite enjoyable....I utilized immersion reading on my kindle....reading as well as listening to this book through Audible....the narrator was excellent! I can recommend both.

What did you love best about The Strange Case of Dr. Jekyll and Mr. Hyde?

How many different eyewitness accounts tell the undoing of Dr. Jekyll

If you've never read this classic, you should. It will most likely change your perception of Mr. Hyde. Having only seen this story told in cartoons and the like, I believe Mr. Hyde is not given a true account of his character in the movies/cartoons.

I reread this wonderful classic for Stanford's Another Look Book Club, which concentrates on short(er) often overlooked classics which the English Department and other erudite participants consider worthy. This book is, of course, eminently qualified. The dichotomy between Jekyll and Hyde, the isolation of his childish/selfish... evil nature and the gradual overtaking of his Hyde over Jekyll is a lovely allegory about human nature, one which I believe. But aside from philosophy, human nature and the role of evil in human nature, the book is wonderfully written, tightly plotted and very much worth the re-reading. Added bonus: the book is short so the commitment is not as high as other books.

A Classic For a Reason

Jekyll and Hyde is the quintessential duality of man story, but most pop-culture retellings of if are poorly done. It was super cool to finally enjoy the original and see where all the retellings get it wrong.